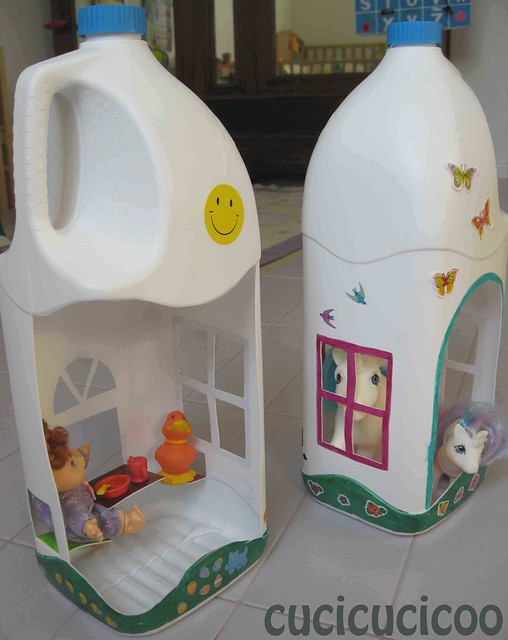 i had a nasty little surprise when i found out that one of my photos (which you can see here, among other places), taken from this post of mine, is getting passed around the internet without any reference whatsoever to the original source. that means that a whole lot of people are seeing my work without having any way of knowing that it’s mine. what can i say… on one hand i’m flattered that so many people like my project so much, but i’m quite disturbed that some people have no scruples republishing other people’s materials without making any note of who the owner of the work is or even, in some cases, acting as if it were his own work. i’ve been putting a watermark/signature on my images i publish, whether on the blog or on facebook, but unfortunately i hadn’t thought of adding it to my old photos, such as the ones of the bottle-houses.

i decided to add the cucicucicoo watermark to the original photos and republish the original post here. i was going to exchange the images in the original post with these new watermarked ones, but then i thought that it might be better to leave them as a sort of proof that they are actually mine. what do you think? in any case, if you happen to see that photo somewhere without the source given, i ask you kindly to give the person publishing it the URL of either this post or the original one. thanks so much!! (p.s.: next week, i’ll have a new refashion to show you as well as a way to use some easter egg packaging!) (p.p.s.: happy birthday today to my mother!)

a couple of months ago i saw a post on one of my favorite blogs, Filth Wizardry, that i knew i’d have to do myself, too: making houses for little dolls or toys out of plastic bottles. ms. filth wizardry made them for her daughters’ beloved fairies, while i made these for my daughter’s beloved My Little Ponies and other small dolls. 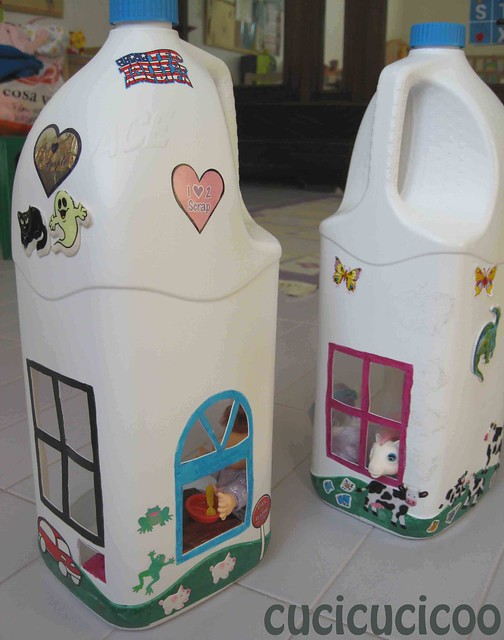 it’s super easy and a nice fun project to do together. the involved big person has to: find a big plastic bottle or two, like these bleach containers. rinse them and dry them well.

if there’s still a bit of sticky gunk from the label, it’s best to get rid of it with nail polish remover. i was lazy and didn’t want to get up, so i skipped this. not a good idea, as you can see here. 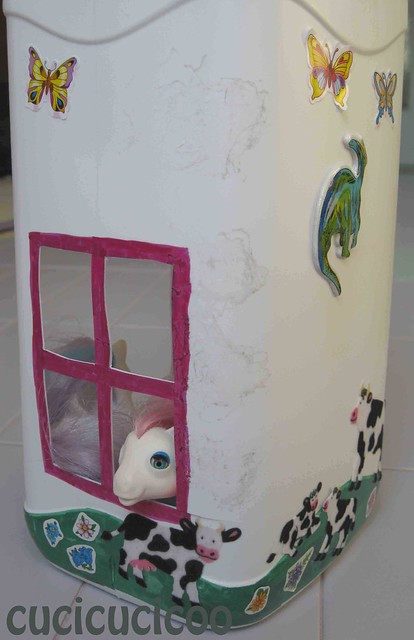 using a fine permanent marker, draw in the doors and windows. it’s better if you first check to make sure that the toys you’re making this for will be able to fit in the door and look out the windows. involve the little one by asking advice as to where to put these fixtures. 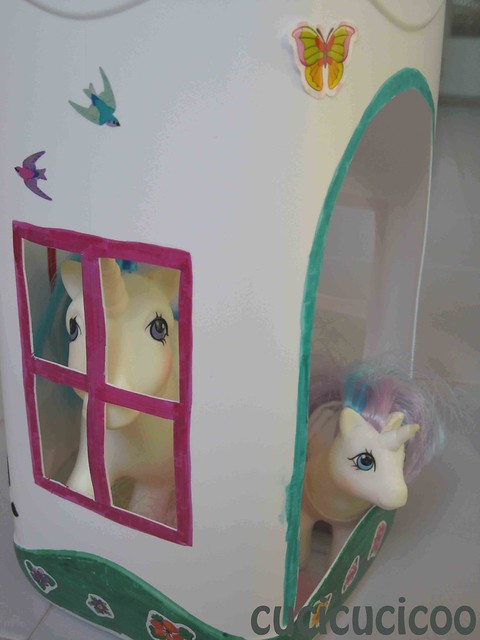 use a box cutter to cut out the shapes. in one of our houses, i made two chairs and a table by cutting and folding the pieces inwards. 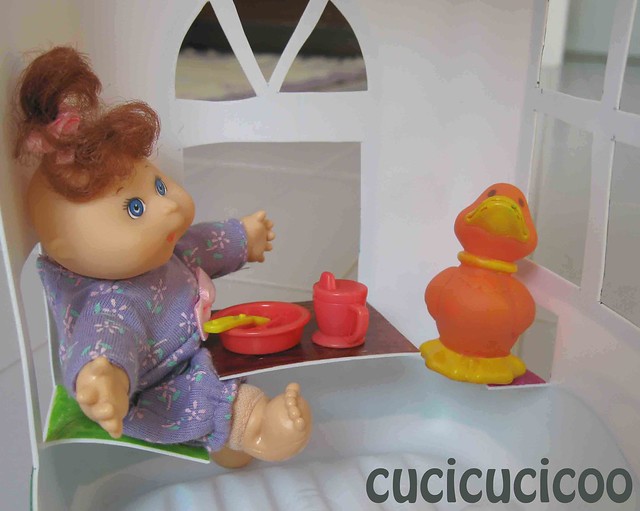 now use bigger permanent markers to color the edges of the windows and doors. it would be better-looking if you also colored them inside, which i didn’t do. again, ask your munchkin what colors to use and how to color. 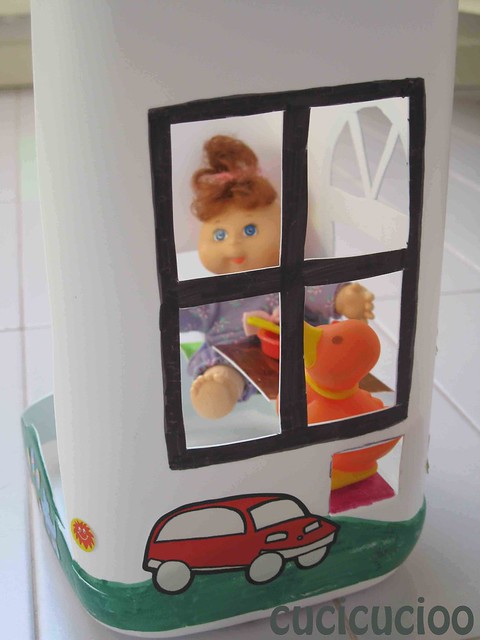 it’s also nice to decorate a bit. here i put a picture on the wall. the fish is actually a sticker. 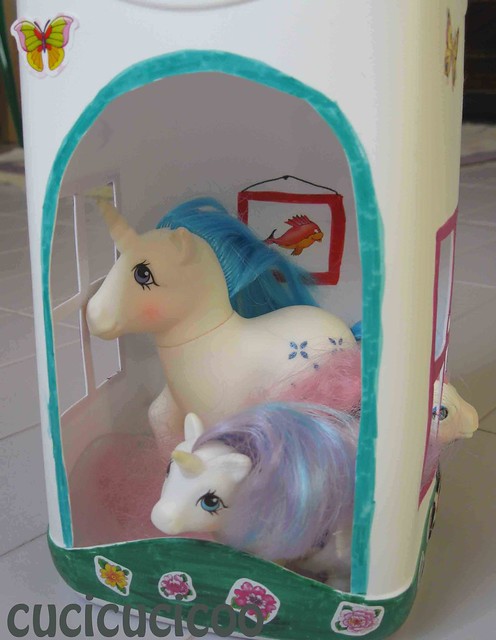 finally it’s the child’s turn. if you’re working in an area that you don’t care too much about (meaning if you don’t mind permanent marker scribbles), s/he can draw flowers or other things. i confess that i was relieved when my daughter didn’t want to draw. instead, she went wild with stickers. 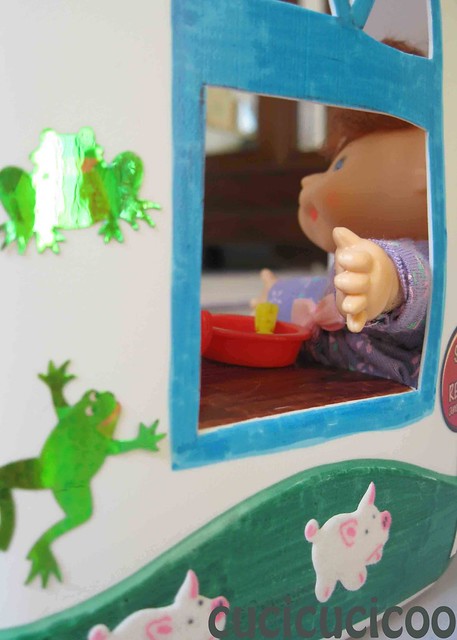 finally it’s the child’s turn. if you’re working in an area that you don’t care too much about (meaning if you don’t mind permanent marker scribbles), s/he can draw flowers or other things. i confess that i was relieved when my daughter didn’t want to draw. instead, she went wild with stickers.

and voilà! a couple of little houses to play with, without spending a cent! 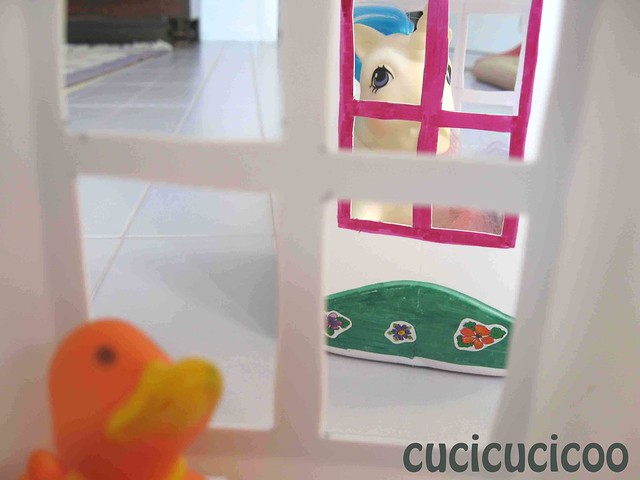 when i showed my husband our works of art, he was shocked not only for our amazing talent (!!) but also because in the architecture course that he teaches, the students have an assignment to take an everyday object and transform it into a living space. and lots of them do the same exact thing i did. who knew?!

20 thoughts on “reposting my bottle-houses”