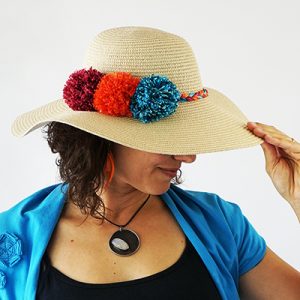 Summer’s officially here and it’s HOT! And sunny. Which means that a big summer hat is a must. So today I’m showing you how to decorate a straw hat in a really easy, colorful way! The secret to this modern hat embellishment is: pompoms made … 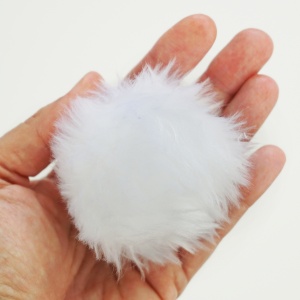 Pompoms just make me happy. They’re so fun and colorful! But when I started seeing faux fur pompoms everywhere a few years ago, I was in love. So soft. So fluffy. I decided that I had to learn how to make them, and discovered that … 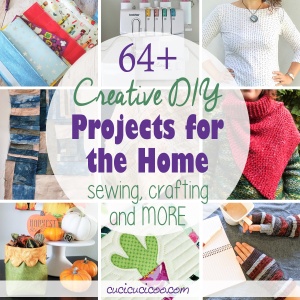 I always love a good bargain. I mean, how can I say no to sewing patterns, fabric or other supplies for next to nothing? I know you feel the same, which is why I am so excited to tell you that Ultimate Bundles is finally … 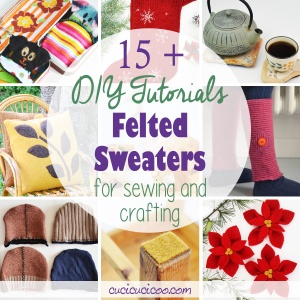 Most people get upset when they accidentally shrink a sweater in the washing machine. I, on the other hand, celebrate! The gorgeous, thick fabric from felted wool sweaters is one of my favorite materials to sew and craft with, and it’s also a great way … 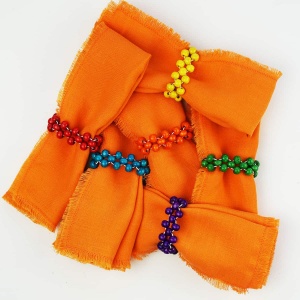 I do my best to avoid using disposable products, which is sometimes easy and sometimes complicated. One of the easiest to use, though, are cloth napkins, which I’ve used for about 12 years now. And what better way to keep your family’s napkins separate than … 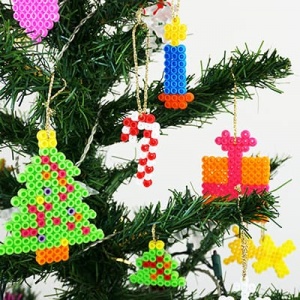 If you have kids, you probably know all about hama beads. Or perler beads, melty beads, Pyssla beads, fuse beads or any of the other names for them. Those little plastic cylinders that you arrange into shapes and fuse with an iron. So today I’m … 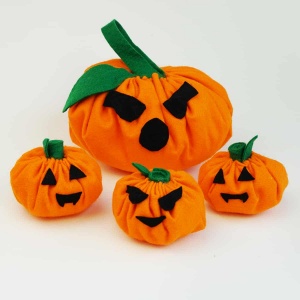 I’m really excited to share this brand new Halloween craft for kids because this easy Jack O Lantern softie tutorial was created by a kid: my daughter, Sofia! Sofia had been sewing project after project from the Sewing School box set* (these books are AMAZING!) … 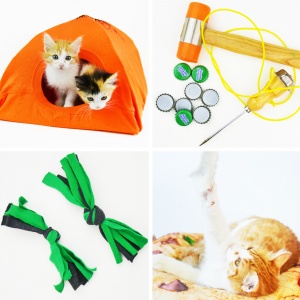 I am, and have always been, a cat person. I love cats and have always had at least one since I was a little girl who begged her mother for a “kitty that goes meow all by itself.” About a year ago we brought two … 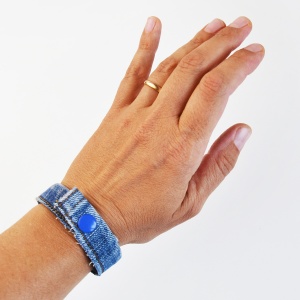 I love refashioning and repurposing jeans. We all have jeans and when they become unusable for one reason or another, the fabric is wonderful for using in so many ways. I love the different shades of blue and the fraying of unfinished denim edges. But … 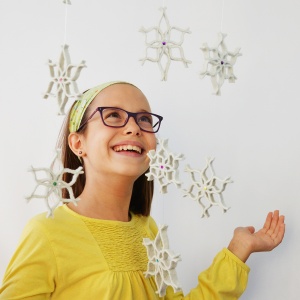 What is it about snow that is so magical?! Is it the soft ting of cold as it hits your skin? Or the bright twinkle snowflakes make in the sun? The muted sounds right after snow has fallen? The sensation of catching frozen bits of water … 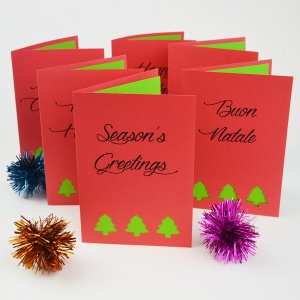 Last year I spent many agonizing months suffering through acute anxiety disorder and recurring panic attacks. It was a really, really bad time for me, and one part of my path to healing was communicating with people more and connecting with them on a deeper … 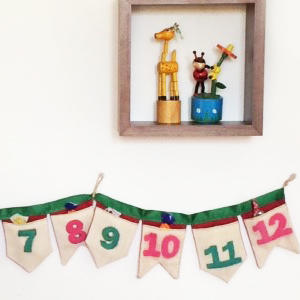 Last week I published a tutorial showing how to sew fabric bunting banners, either with or without my newest PDF pattern, the Celebrate! Banner. I had a pretty big group of pattern testers to try the pattern out to make sure that everything was ok … 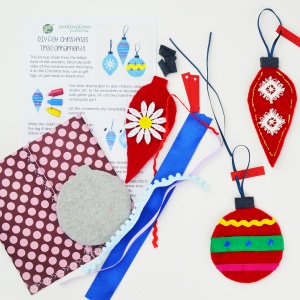 Last year my kids and I cut up a few old felted wool sweaters in my collection to make handmade felt Christmas tree ornaments to give to our loved ones at Christmas. But partway through, I realized that an even better gift for the families … 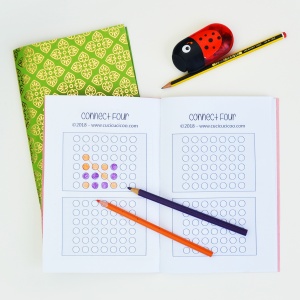 It’s summer, which means that there’s a lot of family travel which, in turn, means that there are a lot of bored kids on long trips. When my children are bored silly on plane or train rides, or waiting for adults to do something adult-ish, … 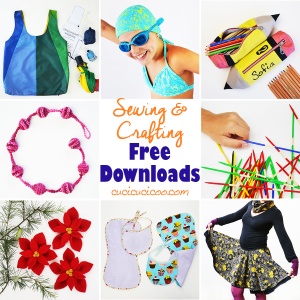 I have some exciting news for you! I have moved ALL of my free downloadable materials into a new exclusive members-only area of Cucicucicoo! So, if you’ve been wondering how to get free sewing patterns and a bunch of other great free crafting materials, you are …

Read moreHow to get free sewing patterns from Cucicucicoo! 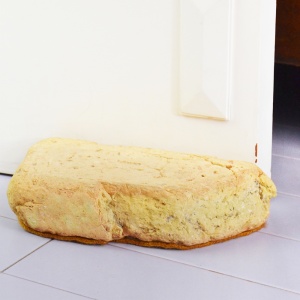 Spring is here, which means windows are open, letting in fresh air, flowery scents and bird songs! Oh, and it also means that the cross breezes make our doors slam shut way too often. Our doors have frosted glass centers, and every time one of … 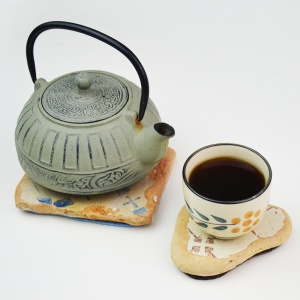 What could possibly be more comforting and peaceful than a nice, hot cup of tea on a cold winter day? As far as I’m concerned, snuggling up under blankets with a good book and some good tea is pretty much the best soothing to the … 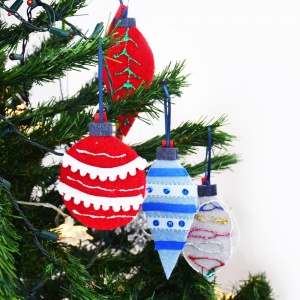 I am a strong believer that children should give gifts to others. No, I’m not saying that they have to save up their pocket money to purchase gifts, but that they should make something with love and care that can be shared with the people … 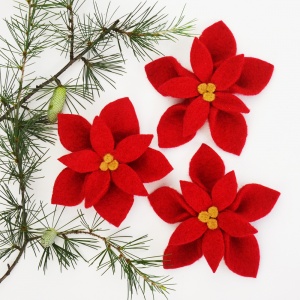 Well, Thanksgiving is over, it’s starting to get pretty dang chilly out, the days are shorter, and my family is starting to get excited for the holiday season! One of my favorite holiday crafting materials is felt because it’s just so easy to use in …

Read moreMake a no sew felt poinsettia from felted sweaters 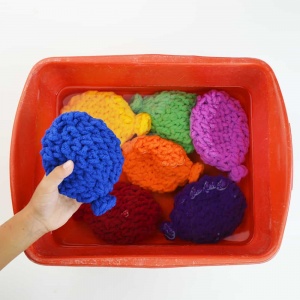 Earlier this year, I saw the coolest thing on Pinterest. I wanted so badly to try it out. I was so curious and I knew my kids would love it. Because who in the world wouldn’t want to try their hand at DIY crochet reusable water balloons?!

Only thing was, it was the very beginning of January, and was probably the coldest day of the year. We were doing everything possible to stay warm.

Flash forward six or seven months to the summer. One of the absolute worst Italy has seen in a long time. Months straight of heat and humidity with virtually no rain. So, we were doing the exact opposite, doing everything possible to stay cool.

At this point, crochet water balloons were sounding even more amazing.

Because everyone loves a good water balloon fight, right? But nobody likes having to go around picking up all the bits of rubber from the broken balloons. And think of all that non-recyclable waste! It drives me nuts!

That’s the genius in this crochet water balloon design by Left in Knots! They avoid all that! You don’t actually fill them up as you would with a classic balloon. You just put them all in a bucket of water and the yarn fibers soak up the water. Throw them at your opponents, then pop them back in the water when they need another soak, and throw them again!

You use the same balloons over and over again, so no waste and no broken pieces of latex to clean up!

When you’re done, just give the balloons a rinse off and air dry them. You can also machine wash and dry them! They flatten out nicely so they don’t take up too much storage space, either.

Let me tell you a little more about my experience making these crochet reusable water balloons.