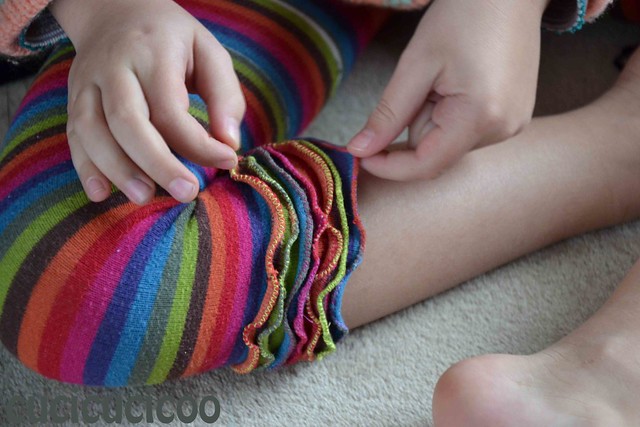 i’ve always liked thick, colorful tights. sure, lots of people have made fun of me over the years, but i feel very me dressed with colored legs. i love that my daughter also likes them and i’ve been very lucky to have a friend who also buys cool tights for her daughter and then passes them on to us when they don’t fit her anymore. last year i also discovered leggings, which i now love for their versatility. so, when i saw this tutorial at make it and love it (inspired by this other tutorial) on transforming too-short tights into funky leggings, i couldn’t resist! 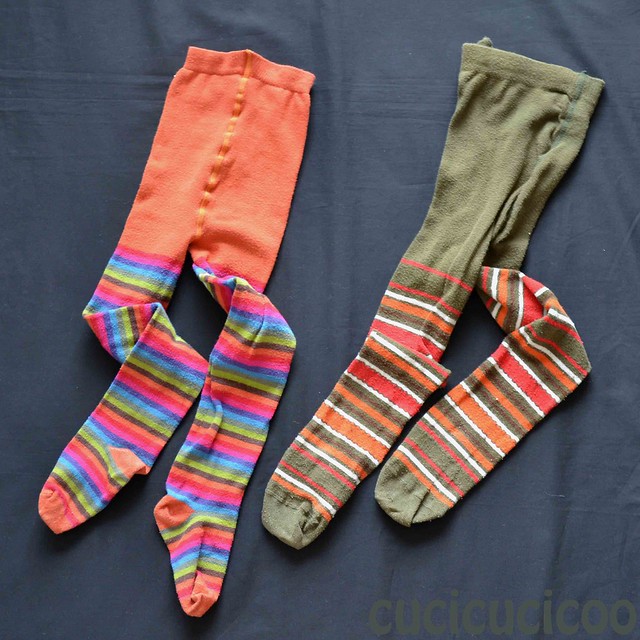 i started out with these two pairs of tights, one pretty new and the other pretty worn out. the first pair had a shaped foot while the other was just a simple tube of fabric with a reinforced toe. so i did them a little differently. 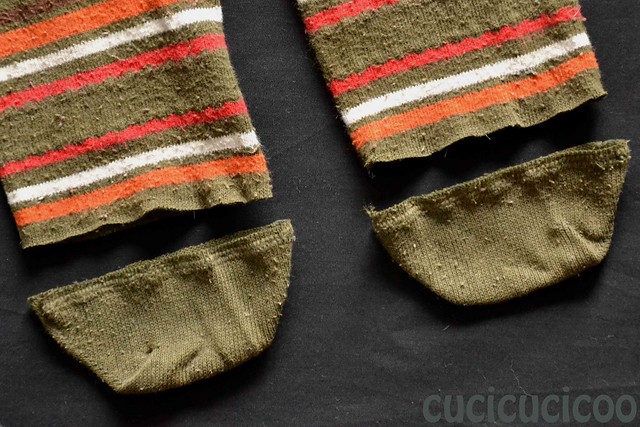 let’s start with the second pair, which was really simple. i just cut off the reinforced toe… 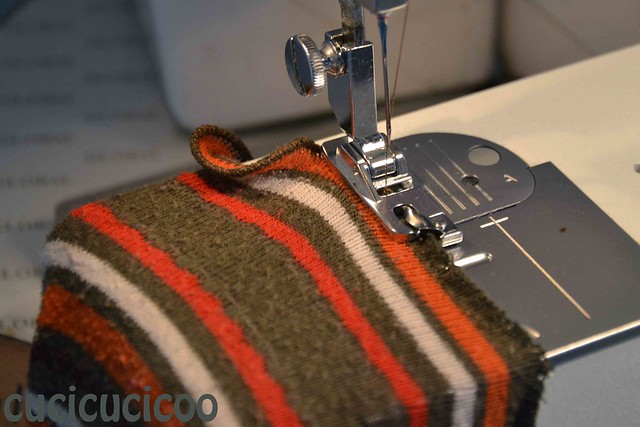 …and i sewed a lettuce hem all around the cut edges. i’d read a tip on sewing really even and professional lettuce hems using a rolled hem foot in the book confessions of a refashionista (my review of it here!). it works really well and now i’m sorry that i didn’t do it that way with my striped purple sweater skirt. normally, when sewing a lettuce hem, you have to pull the fabric a bit as it feeds through the machine, but i pulled the fabric around the free arm, thereby stretching it, and that was enough to ruffle it. 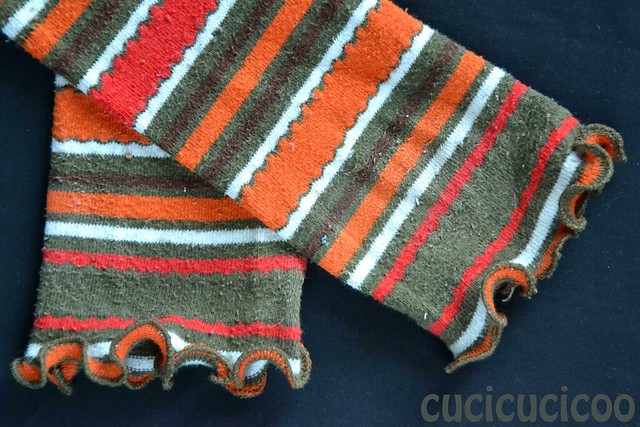 as you can see, this technique creates a cute little ruffle all around the ankles. super easy, but cool effect! (not so cool are those cat hairs on the backdrop fabric after the cat decided to rest on it. yuck!) 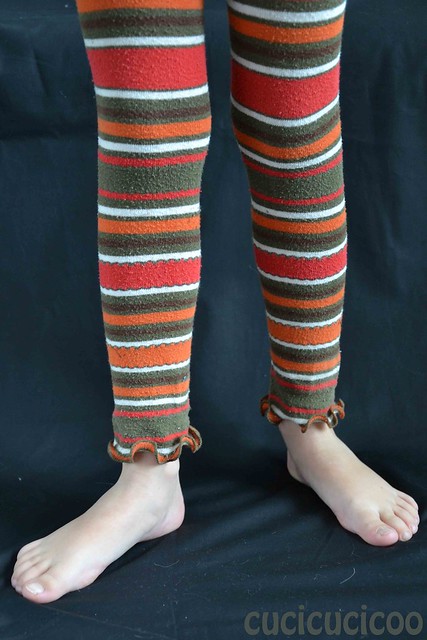 i didn’t take a picture but, without the foot part stretching the fabric down, the hem tends to move its way up the leg a little, but it’s fine for when the weather isn’t cold. 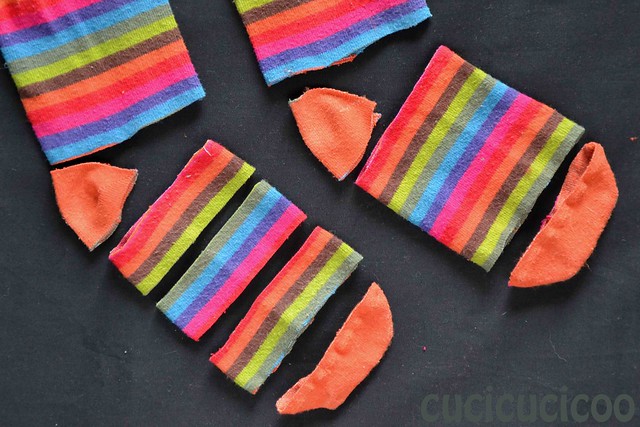 let’s move on to the tights with the foot shape. having to cut above the heel, you lose a bit of length, so these are definitely springtime leggings. it would be a shame to waste the foot fabric, so i did as in the second tutorial linked at the beginning of this post and i cut the foot into three same-sized strips (in the tutorial there were 2 strips). 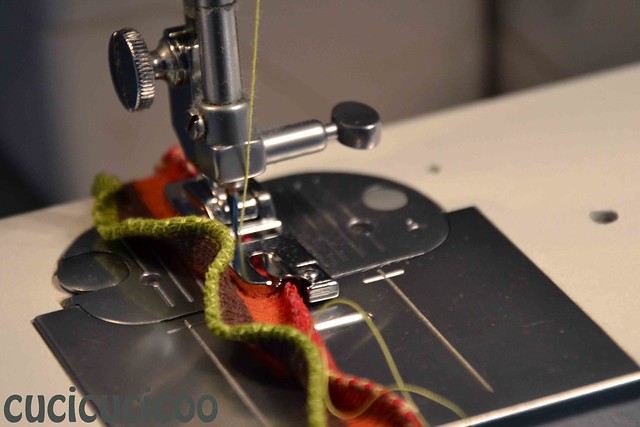 i did the usual lettuce hem on each strip’s cut edge as well as along the cut hem of the tights. 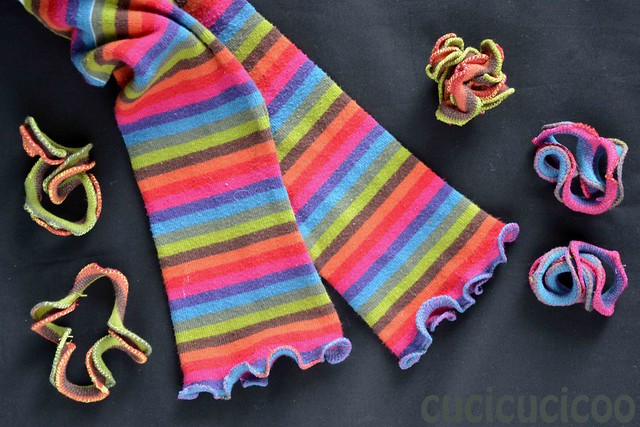 it was at this point that i started getting a tad worried. the strips got considerably deformed and stretched out. i discovered that they could roll up together nicely (as you can see in the above photo in the upper right. that blob is two tangled-up strips.) and they could be made into a sort of flower to embellish a pin, for example. 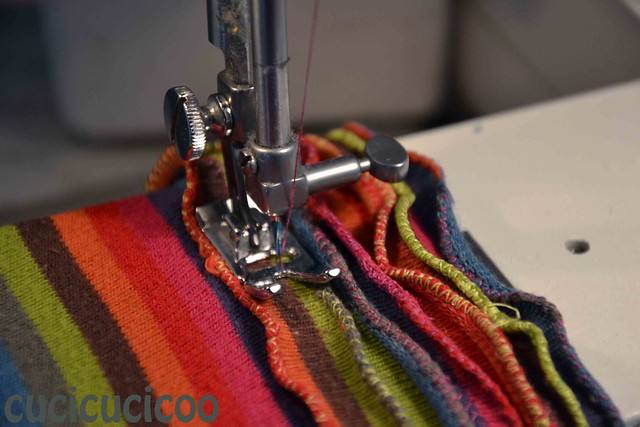 but it was fine. i slipped the tights into the strips and i zig-zagged the strips on (so they could stretch). 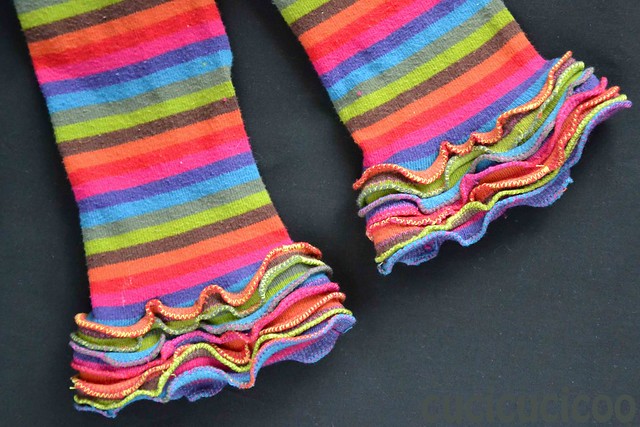 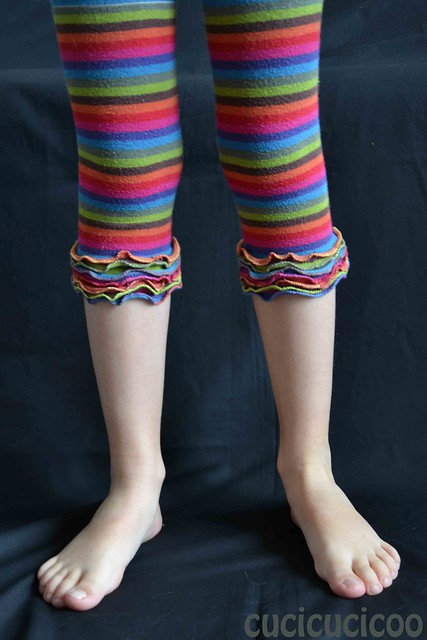 but when worn, they stretch out and fit perfectly! 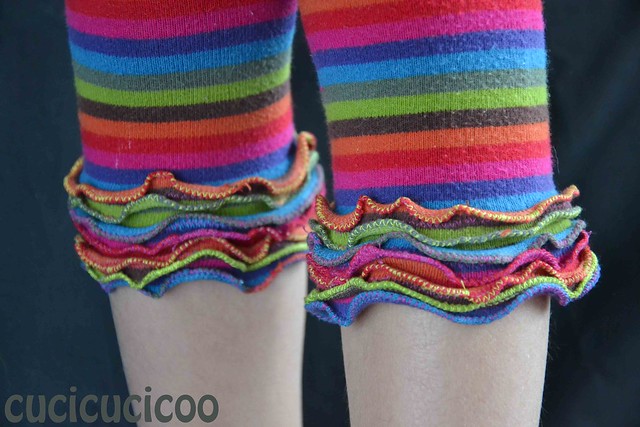 cool, right? they look sort of clownish, but in a cute little girl sort of way. 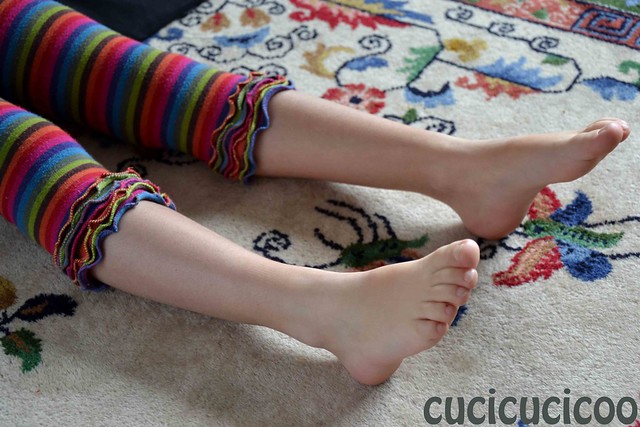 the most important thing is that my daughter just *loves* them! i just love expanding our wardrobe without spending a cent!

41 thoughts on “make new leggings out of old tights”