don’t you? they’re so versatile, so reusable and recyclable, so… free.

you can play with them in so many ways. for example, instead of buying the plastic washing machine that my daughter wanted, we made it ourselves from a box. i cut out the door and the hole to slip in the cardboard tube handle. she drew all the buttons and knobs and played with it for hours and hours (also drawing a little more with lipgloss). and not just she. it became a favorite hangout for our dear feline friend, macchia, too. unfortunately i don’t have any other photos of the project because they are still in the card of our broken camera that the repair people still haven’t given back to us after about 10 months. (now that’s service, huh?)

the great thing is that you don’t even need to do anything that complicated. instead of making the super cool garage that an adult has to create, you can do what my friend’s son did (thanks, katie, for the picture!). here there’s another collection of cool cardboard box ideas. we made a doll bed, too, but much less fancy than the one on this link. we just cut off the top part of the box, popped in a blanket and loads of dolls and stuffed animals have rested in it. (once again, no pictures!)

if you have a little box, why not cover it with paper salvaged from one of those huge european easter eggs, stick it to the wall with masking tape and make…

it comes in handy for those who often receive fish in the mail. (i made that fish for my sister about one hundred years ago. she found a couple out of the dozens i’d made her god knows where.)

and if you have a really big box, why not make a play house like we did nearly three years ago?

this house has been so loved by all the kids that have put foot in our home, that it had completely fallen apart. gosh knows how many times i’ve had to repair the collapsed roof, reattach the chimney and substitute the toilet paper tube-handle. the door got folded up so much that it wouldn’t stay closed anymore. over time, the walls got completely wallpapered with hello kitty stickers. and lastly, it got buried by and filled up with the crazy mess in the kids’ room. i finally just took out it and put it on our landing to flatten it and bring to the paper recycling bin. but the kids then rediscovered it and haven’t stopped playing with it since. until…

…i could finally play in it too! before i couldn’t fit in through the door, but now i can! (yes, you’re seeing correctly: that’s my face in the left window and my knee/leg in the right one.)

they played with it so much that one who side finally burst open! do you see how there’s no need to spend anything for plastic stuff in order to have fun? long live simplicity!

p.s. see my daughter’s t-shirt in the second picture of this post? it’s still getting used! 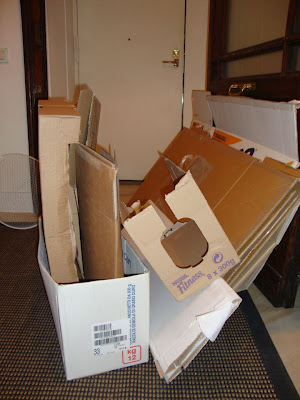 p.p.s. if you live in or near naples and haven’t seen it yet, read this post! today at 4 pm there’s fun to be had with me… with cardboard!