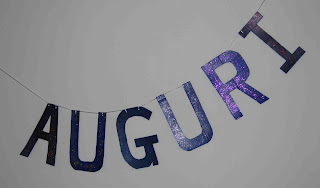 My daughter was born in August, when pretty much everyone in Italy goes on vacation, so she can never celebrate with her friends and family at home. So we throw her a party for her onomastico, saint’s name day, as is celebrated in Catholic countries. I’ve had a lot of work to do, but I did what I could manage for her party. Unfortunately almost all of the pictures I took of what I did are horrid, but they’ll just have to do!

First of all, we made a sort of banner saying “Auguri,” (a very generic sort of “congratulations” that is used for every possible occassion). I have pictures of every birthday party I had as a girl with all the guests under a “HAPPY BIRTHDAY” banner that my mother made from colored construction paper. Every year, the same banner and quite often the same kids.

So I found a couple of shoeboxes, cut out the letters and punched holes at the tops to string them up. Then my daughter and I painted them with acrylic paint. I had imagined doing each letter a different color, but the fact the virtually all our paint had dried up foiled my plans and we had to settle for a different color of glitter for each letter. A nice afternoon project to do together and I assure you that it does look much nicer than you would think from this photo! 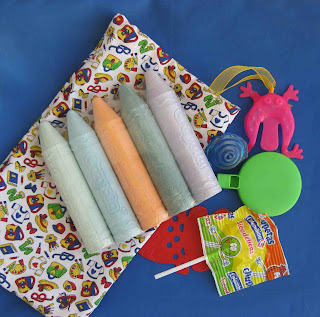 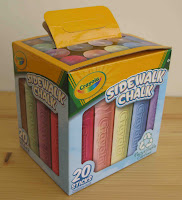 Then the favor. I still haven’t figured out if it’s typical in Italy to give out birthday party favors (it is in the United States), but I prepared them anyway. Last year I brought sidewalk chalk home from the USA and all the kids (including the old ones) who live in our apartment complex were completely enthralled, because this sort of mega-chalk doesn’t exist here, and kept asking me for months afterwards if I had any more of “that big chalk” and where I had bought it. 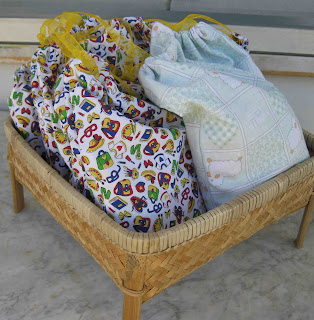 So this year I bought a few boxes and put a package of five with Colombian lollypops and some little plastic toys in cloth drawstring sacks. I made a bunch of these sacks in just a few hours and my daughter helped me turn them right side out and fill them up. 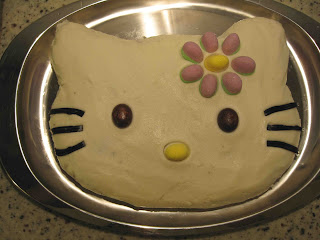 And I made the desserts. I didn’t take a picture of the Rice Krispies Treats, a typically American thing, made from the breakfast cereal and melted marshmallows. They’re always a success because first of all, they’re yummy, and second, nobody in Italy knows what marshmallows are. I did remember to take pictures of the Hello Kitty cake, even though the pictures are horrid. I cut out the shape of her head from a rectangular chocolate cake, covered it with white frosting and added liquorice whip whiskers and candy eyes, nose and flower. Auguri, Sofia mia!