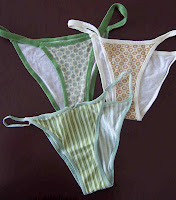 God knows what in the world I was thinking when I bought these pairs of underwear a couple of years ago. Apparently I was under the delusion that my behind had miraculously gone back to what it had been maybe when I was 18, a most improbable possibility. And I obviously couldn’t wear them more than once or twice thanks to the quite unpleasant sensation of…. Well, I really prefer not to be vulgar here. You know what I mean anyway.

Seeing as I’d already trasformed something into underwear, I decided to do the opposite and transform underwear into something else. However, no matter how cool the fabric of these undies is, there wasn’t a whole lot of it, as you can clearly see. And so I did the only thing I could think of: to cut and dry the flowers and leaves of my lavender plant and make some nice lavender sachets for the drawers. 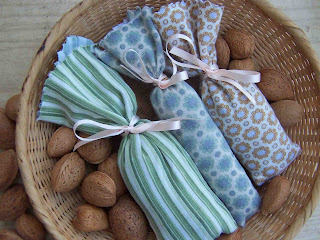 Though I will come clean, stretchy fabric like this (which is like t-shirt fabric) isn’t really the best for this type of project because the pieces of lavender stuck to it and wouldn’t go down nicely into the sack. And sometimes they sort of stick out through the fabric. Regular cotton would’ve been much better. Though certainly less fun and satisfying! I did this instead of the gazillions of things I really should be doing. Sunday we’re leaving for a one day layover in Madrid, then 3 weeks in Boston area (where I’m from) and then 3 more weeks in Colombia (to visit friends) and I’ve got tons of gifts to sew, bags to pack, Spanish to try to miraculously relearn….

8 thoughts on “And from undies to…”