Home » Crafting (all) » Repurposing » From bike to bag 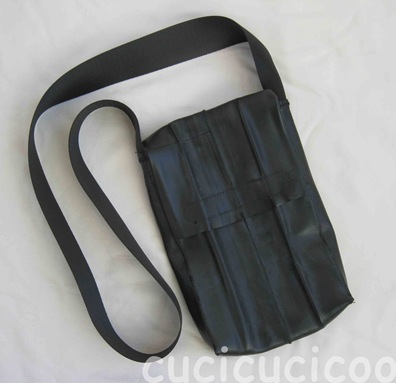 finally! you know when you’ve wanted to do a project forever, but you never actually do it? my hubby had been asking me for a messenger bag for ages, but i was never really sure what fabric to use for it. then he realized that what he really needed was one of those smaller versions to carry around just his wallet, keys, phone, etc. i showed him all my fabric and he even chose which ones he wanted for his bag. but i still didn’t sew it. my opinion is, if you don’t really feel like making something, there’s a reason. in this case, it was because this bag was meant to be sewn from an old bicycle inner tube. 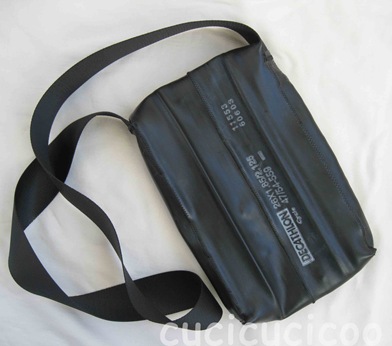 i had seen a few projects sewn from inner tubes, but i was a bit worried about trying it myself because they always made it seem like something really complicated (not to mention something that breaks needles and sewing machines).

but it wasn’t like that at all. sure, it wasn’t like sewing quilting weight cotton and my machine did skip some stitches, but all things considered, it went pretty well. the only issue was that i had never sewn a bag like this and i didn’t go about it in the most intelligent way. but that’s another story. 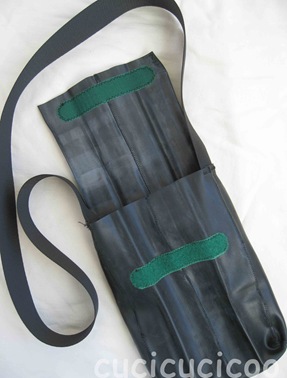 so, what do you do? take an old bike inner tube and cut it open so that you have one long rectangular piece. then you’ll want to wash that piece out with soap and water because these things are full of white powder (and they’re just gross in general). don’t even bother trying to flatten out the creases from the edges of the inner tube because it just won’t work (i tried!). that’s why my bag looks like it has stripes. and then…do whatever you want with your special “fabric”!  i used a zig zag stitch to join the pieces to make one wider one and then to sew up the sides.

i used one inner tube for the bag and then was about to use another one for the strap when i remembered something. last year, when we brought our poor old car to get junked, i became obsessed with the seat belts and insisted that they get cut out for me before destroying the car. so i used an old seat belt for the strap.

i’m pretty happy with the end result. from completely upcycled materials, my husband has a bag just right for his needs that is absolutely unique. it looks and feels like some sort of weird leather. the next thing i want to try…a wallet made from an inner tube. we’ll see what happens!