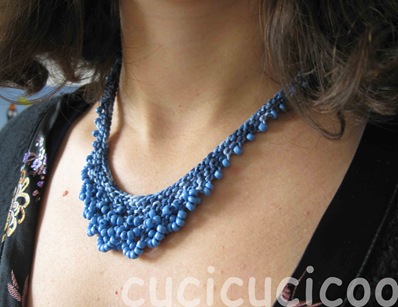 yep, i’m already thinking about christmas. i generally start thinking about gifts around december 20th, but not this year! seeing as my munchkin should in theory make his debut december 30th, i’d rather get everything taken care of earlier for once.

i knit this necklace with cotton yarn and beads pretty quickly. i found the project in the book 101 designer yarn stash wonders and it was the first knitting project i ever did that wasn’t a rectangle. how exciting! so i thought that it could be a nice gift for a few people at christmas. what do you think? i also thought that this year i could give my daughter’s teachers the same sort of chalk cloth coasters that i sent maria for the swap. for everyone else, i don’t know. i saw that alessia is selling the pattern for a cool basket that i bet a lot of people would like to receive, but i don’t know how to crochet. i hope to learn with the crochet lessons that alessia herself has. we’ll see if i manage to learn in time. i doubt it! 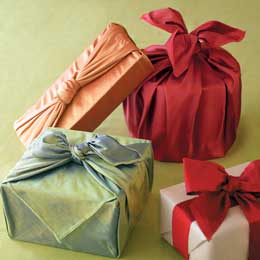 i’ve also been thinking about something else: gift wrapping. i never buy gift wrapping, but only reuse pieces that were given to us or that i save from parties or get togethers. i have a pretty big collection of wrapping paper by doing this. but i’m thinking that this year i want to start making and giving furoshiki to try to help educate people around me about the waste of gift wrapping. it’s a japanese technique: a simple fabric square which can be folded in different ways to make very pretty packages which are also very ecological, seeing as they are reused many, many times. google it… i think they’re pretty cool, don’t you?!