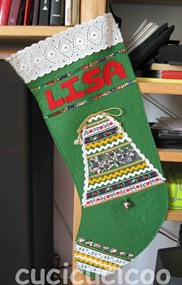 one of the nice things about having two cultures in one house is that you celebrate a lot more often. not only are there different holidays to celebrate, but the ones in common are often celebrated in different ways. for example, christmas. in the USA, kids leave a glass of milk and a plate of cookies out on christmas eve and hang a stocking on the fireplace. that way santa claus can come down the chimney, fill up the stockings, leave gifts under the tree and rest a moment with the milk and cookies (i always wondered, though, how santa had enough time to put the dirty dishes in the dishwasher, too). then back up the chimney and on to the next house.

but the idea of santa claus started up pretty recently here in italy (there wasn’t any santa when my husband was little) and he does different things here. he doesn’t fill up any stockings, so kids don’t leave them out for him. however the “befana,” an old witch, fills up stockings the eve of epiphany a couple of weeks after christmas (the befana doesn’t exist in the US). it’s sometimes a bit complicated to try to explain these differences to my daughter without ruining the season’s magic. but in the end, she’s just happy to have her stocking filled up two times every year instead of just one. lucky kids who get to celebrate the traditions of two different cultures!

let me get to the point. very often in the united states, kids have special christmas stockings. the kids of my generation in my family had stockings that my aunt made for us, all of them similar but with different pictures. she made them out of felt and decorated with ribbons, sequins, lace, bells, etc. we always loved our special stockings. (mine is in the photo above) 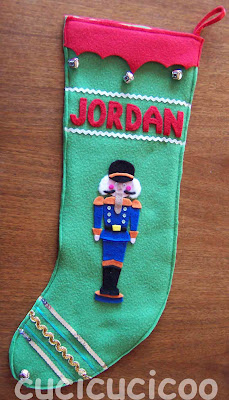 unfortunately, my aunt died of cancer when i was at university and so when my daughter was born, i decided to continue the tradition for our family’s new generation. but modernizing them a little. instead of felt, i used fleece. 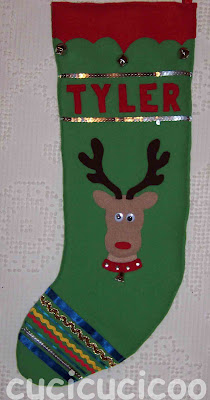 my brother and sister and cousins were really happy and touched to see the new stockings like the ones my aunt had made and the kids, never having met my aunt, really liked the colors and pictures made just for them. and, from what they tell me, the kids still get excited every year when it’s time to take out the stockings again.

it took me a while to make them, but i’m happy with the way they turned out. i admit that i copied the pictures from the internet. i looked for specific types of designs in google images and enlarged them on the computer to get them to the right size for the stockings. then i traced the images onto used printer paper from the monitor, cut out each part and traced the shapes onto the fleece. i also changed the loops to hang them. the ones my aunt made were out of felt, like the rest of the stockings, and with time and the weight inside the stockings, they came apart. so i reinforced my fleece loops with ribbon sewn to them. 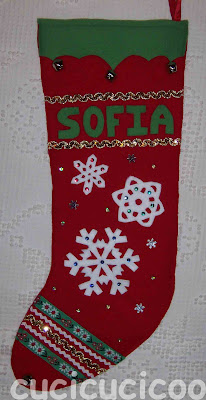 here’s the stocking i made for my little girl. it doesn’t look particularly complicated, but it was the one that took me the most time in the end. it was pretty tough to cut those snowflakes out. 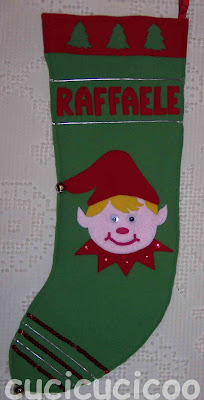 and finally, i couldn’t leave my poor dear husband without a stocking, so i made one for him too.

next year i’ll be back to stocking making for my cousin’s expected arrival and i hope to be able to make another one for an arrival in my house, too. keep your fingers crossed!