I’ve recently heard a few people say this, that they’d like to stop eating so much meat, but don’t know how to get by without it. How would they get their protein?! And meat is so fast to get ready! Once I saw one of those shows where a judge puts in his two cents’ worth after two people fight it out in which a divorced and vegetarian mother was against the fact that her ex went out hunting with their son and they ate the meat together. The whole audience (and also my mother-in-law) kept saying that the mother was pretty much abusing her son by not feeding him meat because how in the world was he supposed to grow big and strong?! I can’t remember the judge’s ruling, perhaps because it was so stomach-turning that I had to leave the room. 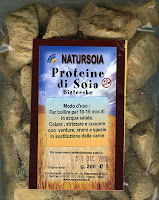 First off, I want to say that I’m not a vegetarian (though I do eat very little meat) even if I would like to be. But I’ve found that very few people realize wat harm eating meat can do, not only to the poor animal, but also to the environment, your wallet and your own health. And people often don’t realize that vegetable protein is very valid, as well as being better for the human organism without harming the environment or mistreating animals, not to mention while costing much less. There’s a wide range of legumes (beans, that is) that can be cooked and eaten as they are or prepared into products such as tofu and seitan. And they are really really good.

I’ve recently started using soy protein, dried chunks of soy which can be used instead of meat. I made a lovely vegetarian bolognese sauce (bolognese is a sauce full of ground meat), first sauteeing garlic and chopped-up carrots, then adding whole canned tomatoes and the soy protein (after having boiled it for about 15 minutes to soften it). Tossed with penne pasta and… voilà! Preparing this soy protein this way, this bag which cost me about €2.50 was worth 6 portions of meat. Not bad! I also made a yummy fennel and orange salad, one of my favorites, cutting raw fennel into strips and peeled oranges into chunks, mixed with a little oil and salt (or gomasio, crushed sesame seeds, instead of salt). No meat and we were stuffed full at the end of dinner.