my daughter and i have been going to the pool since october. this is what happened: she was afraid of the water and i was afraid that she’d never learn to swim enough to be safe near it. in order to convince her to take swim lessons, we made a deal: i’d taken them too. i didn’t really want to because i’m not a lover of sports, but i did recognize that my technique was not exactly tip top. at first i found it really hard to go and i disliked going (even if i felt great afterwards), but the promise had to be kept. and now i love it! i keep getting stronger (and thinner!) and better. i can even do a few lengths of freestyle… well, with a bit of a break between lengths, but hey, before i couldn’t even do three strokes straight of it, so i think that’s quite an improvement.

the only think i don’t like is the pool’s obligatory gear: bathing suit and sandals, bought from them, of course. they explained that it’s to create a serious image for the structure, which seems pretty improbable to me, seeing as no one can go into the pool area except those having their lessons at that moment and the personnel, and in any case all you can see of the people in the water are their swim caps and goggles… which are all different. i guess they just wanted to make some more money with these sales. oh well… but i really hate the monotony, swimmers often mistake their pool shoes for others’, and there’s also the tendency to have the same bathrobes. so first of all i decided to do something about the anonymous bathrobe that was the same as hundreds of others with a little tie-dying. before it looked like this: 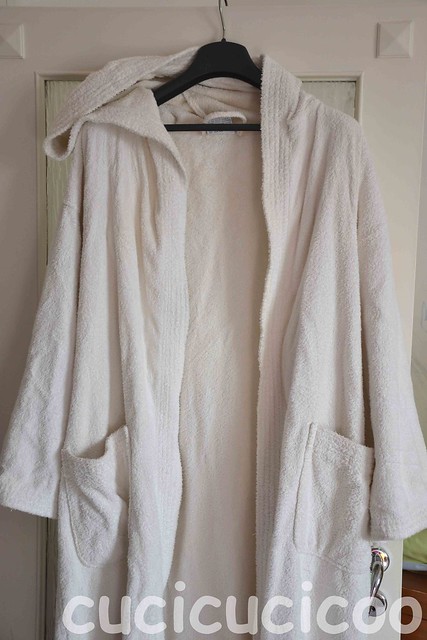 boring, right? i folded it up and wrapped elastics saved from our veggies around it as best as possible… 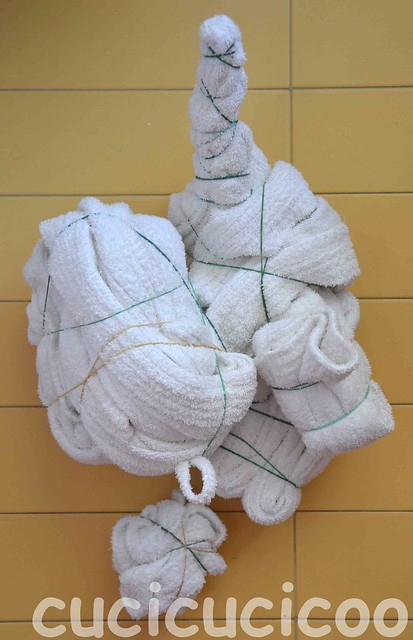 …and after a washing cycle with green dye (in italian, “petroleum green,” ugh!) and a box of coarse salt (and another cycle with darks to get rid of any dye residue), i came out with this: 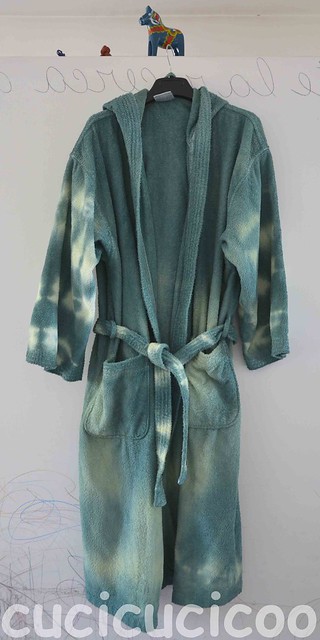 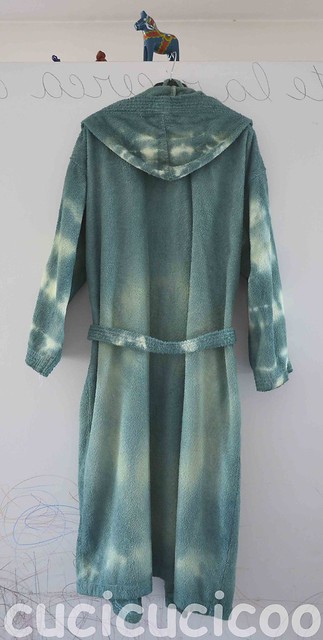 not perfect, but it wasn’t easy with such a big, thick piece of fabric and, considering that it was my first experience with both dyeing and die-dying, i’d say i’m pretty happy with it. and best of all, my bathrobe is now totally unique and nobody gets it confused with theirs!

i’ve done other projects for the pool, too, but for now i’m leaving this post like this because for the first time i’m using html for the post images that are in my flickr account. i’m testing it out, so the next post will be longer! do any of you use flickr? what do you think about it? i find it very confusing and the process a bit long, but we’ll see how it goes.