i already showed you what sheri from awesomesauce & asshattery sent me for our swap. here’s my part for her. as per request, a skirt made from two t-shirts (similar to these other skirts i’d already made).

the first (and decided more interesting) shirt. (don’t mind the one on the left. i put the wrong brown shirt in for the pictures and couldn’t photoshop it out the way i’d put it.)

and the second, less interesting. this shirt was actually already a refashion because originally it had long sleeves, but one of the sleeve snaps came off, so i cut off the sleeves. now that i think about it, this was my first refashion ever. (unless you could cut-off jeans.) hence the darker sleeves, because they got washed considerably less often.

see? here’s my little girl in the long past may 2008 at the age of 21 months (wow, the same exact age as my little guy right now…) and “roberta la bambola” (roberta the doll) wearing the sleeves in their own distinctive way.

while i was cutting the first shirt, i discovered this armpit which had been sewn badly. look at those mismatching seams. and i thought that a lot of times people equate “handmade” with “crappy-made” but it really isn’t that way at all. because frequently handmade items are amazingly well-constructed and factory-made items look like they were made by a 5-year-old. (hopefully they weren’t)

i didn’t take pictures the first time i sewed this. i made a waistband with a wide elastic inside the fabric. then i kept the part under the tie intact and, taking advantage of the wrap shape of the rest, i assembled the rest. then i attached it to the intact part by wrapping it around so it would overlap in the front. except… 1. the top part was too long and ended in the worst place, thereby emphasizing hips and butt and 2. the top part was also too tight. (and yes, the kids’ room is the only one with a big mirror.)

so i took it apart and cut off a strip from the too long/tight top part.

i cut it into four strips, opened up the top part and inserted the new strips, three on one side and one on the other, just to keep it assymetrical. on the back i added another seam just for decoration’s sake.

of course, when i started pinning the bottom part on, wrapping it around, i realized that, with the top part being wider, the bottom part opened up in front without overlapping well. so i gathered all the bits of fabric i had left, made up three long strips and i added them on to the bottom fabric piece. see where the brown edge ends and there’s that little strip of patterned fabric? there. but that little strip should’ve been brown, not patterned and it drove me crazy. but i didn’t have any more fabric, so i couldn’t do anything about it.

MUCH better now! but still, that annoying bit of patterned fabric!

desperate, i looked once more for a little bit of brown fabric and found two tiny pieces that, sewn together, could cover up the offending patterned fabric. sigh of relief… and now i was happy with it! on with the twirling test… 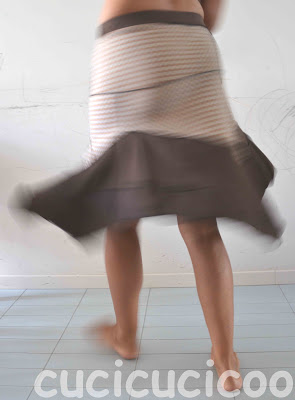 i couldn’t send off the package without a little something for her munchkin, so i added a travel chalkboard. (i was sure i’d posted about these chalkboards, but apparently i forgot. oops…)

if you’re interested in seeing sheri’s reaction, you can here. so, what do you think, would it be worth it to do another swap with her? definitely!