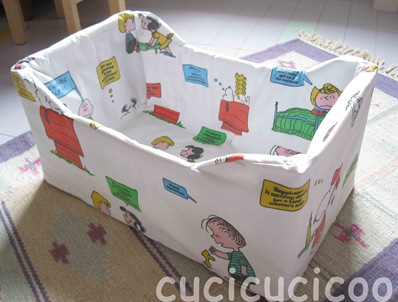 i had some very used and loved bedsheets (we’re talking decades of continuous use by my siblings and me) with peanuts vignettes on them which i have always loved. except that the fitted bottom sheet was very worn out in the center and was a little too small to fit around my daughter’s mattress. so i decided to recuperate the sheets for a few different projects. 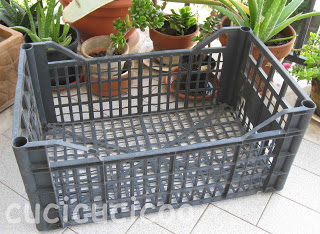 we always need containers for toys in our apartment. so i took one of those plastic fruit crates (that people give us full of things from their gardens but which they never want back, i have no idea why not) which had been on our balcony for the past year. 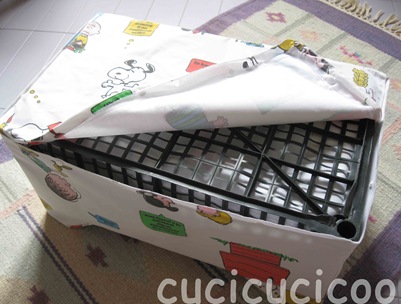 i washed it and made a removable cover for it with the fitted sheet. i removed the part that was the most worn out, but even the rest of the fabric had gotten a bit thin (although the drawings were still in good condition), so i reinforced it with heavy-weight iron-on interfacing on the back. it opens on three sides on the bottom to fit over the crate (and to take off the cover and wash it) and it closes up with snaps. 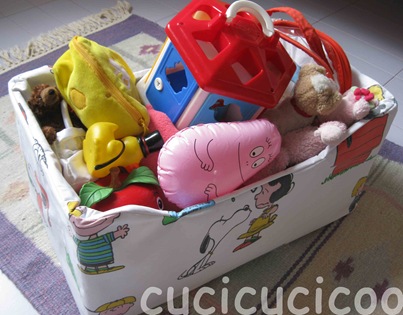 a good amount of toys fit inside it and, seeing as i have two more of these crates and they can be stacked one on top of the other to save the precious space in my daughter’s bedroom, i want to make covers for those, too. but next time i’m trying without the interfacing because i’m not convinced that it was really necessary. 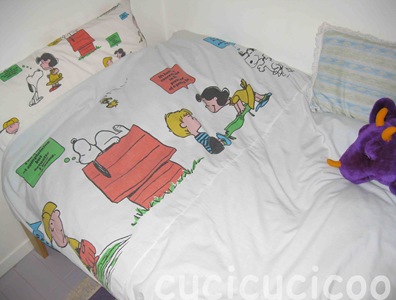 then, with the rest of the fitted sheet, i made a bed pillowcase (there was one originally in the set, but i have no idea what happened to it). and with the top sheet (which was still in good condition) and another plain white sheet we had hanging around, i made a down comforter cover. (pardon the photo, but with all the rain we’ve been getting, there isn’t a lot of light where the bed is.) there’s a line under the drawings because i had to move them up on the cover (they were originally at the bottom of the sheet so that you could see them at the top of the bed when folded up and over the bed covers). but it doesn’t bother me at all. and my little girl is super happy!

seeing as the top sheet was wider than what i needed for the comforter cover and there was an extra vignette of linus that got cut off, i used it to make a little pillow. except i still have to stuff it, so i don’t have a picture yet.

and so, i must say that i’m quite happy! from a set of bedsheets that any normal person would’ve thrown out, knowing that they had had a long life, i made four things that we needed without using any new materials!