A couple of years ago I was cleaning out a room and made a pile of random brochures and entrance tickets from our honeymoon for my husband to look through and give the ok to throw away. And thankfully he realized that what I’d thought was just a simple brochure for a contemporary art exhibit we’d seen at the Mass MoCa back in 2004 was actually a sewing pattern for a bag. I opened it up and realized that it wasn’t for any old bag, but for a handmade magic bag for shoplifting! 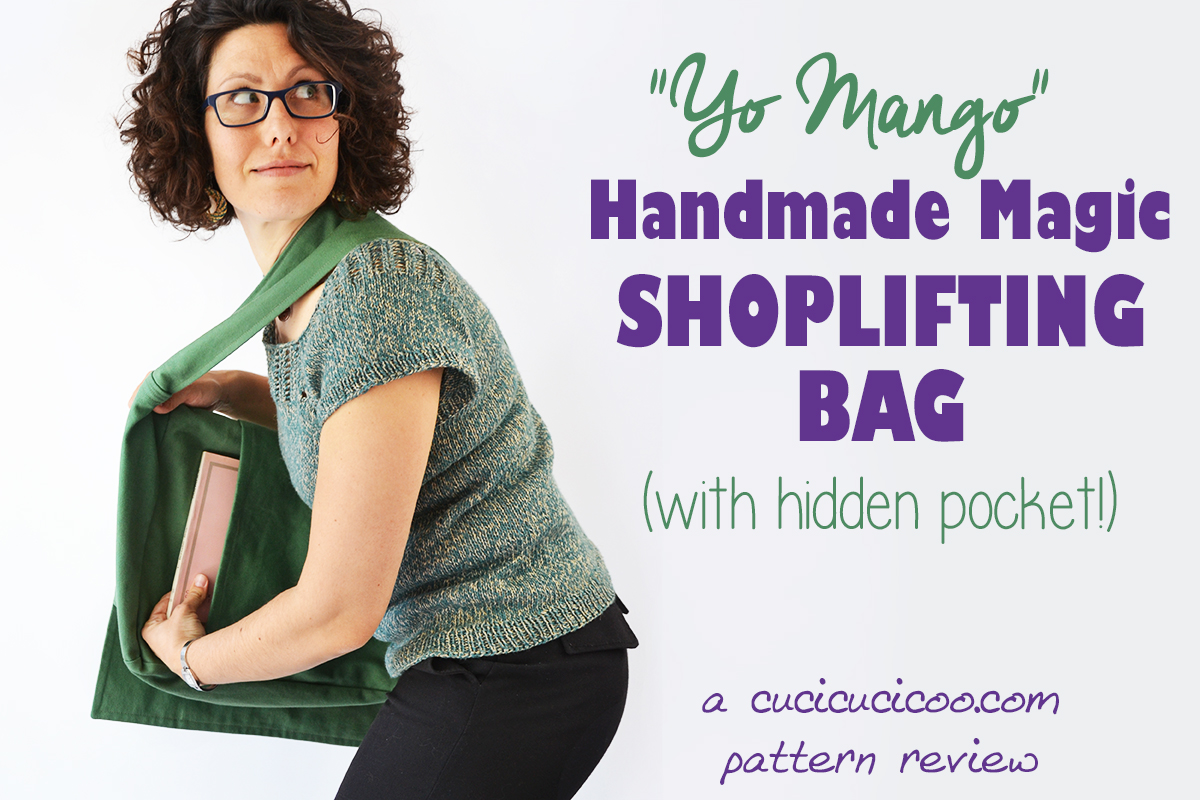 **Update: I wrote this further down, but some people haven’t read that far down and have gotten very angry about this post. So let me write it here, too: I DO NOT AGREE WITH SHOPLIFTING OR STEALING OF ANY TYPE! I made this bag to try out the sewing project proposed by a contemporary art exhibit and I use it to bring my gear to my swim class. I have never considered using it for shoplifting. Please do not steal. 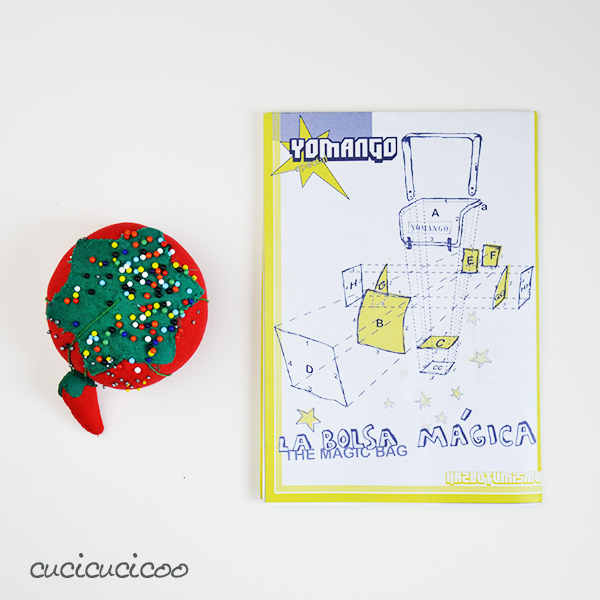 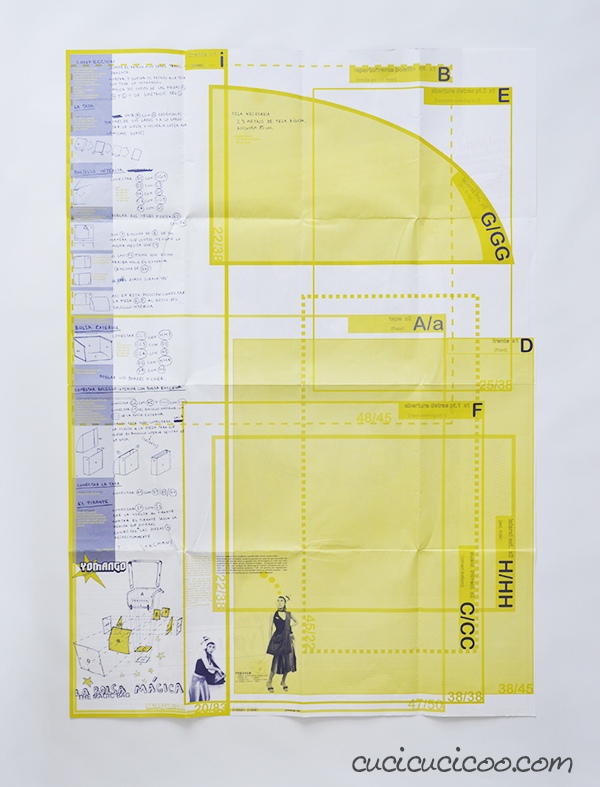 The pattern itself is a basically a series of rectangles and a couple of pieces with one curved edge, so I thought that it would be a pretty easy sew. 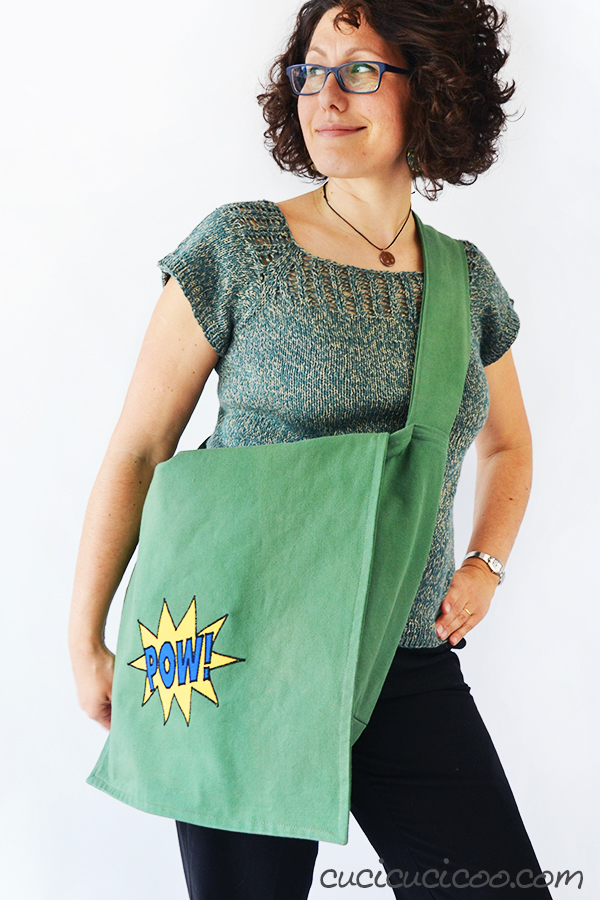 I had a remnant of green canvas fabric that a friend had given me that was the perfect size for the pattern pieces (and also nicely matches my knit Gemini spring sweater). I spent an afternoon sewing, picking out my stitches, and resewing as I tried to figure out the very enigmatic sewing instructions, added the “POW!” appliqué that is part of my appliqué packs (that I am slowly but surely putting together), and there I had my new over-the-shoulder bag, a sort of oversized messenger bag! 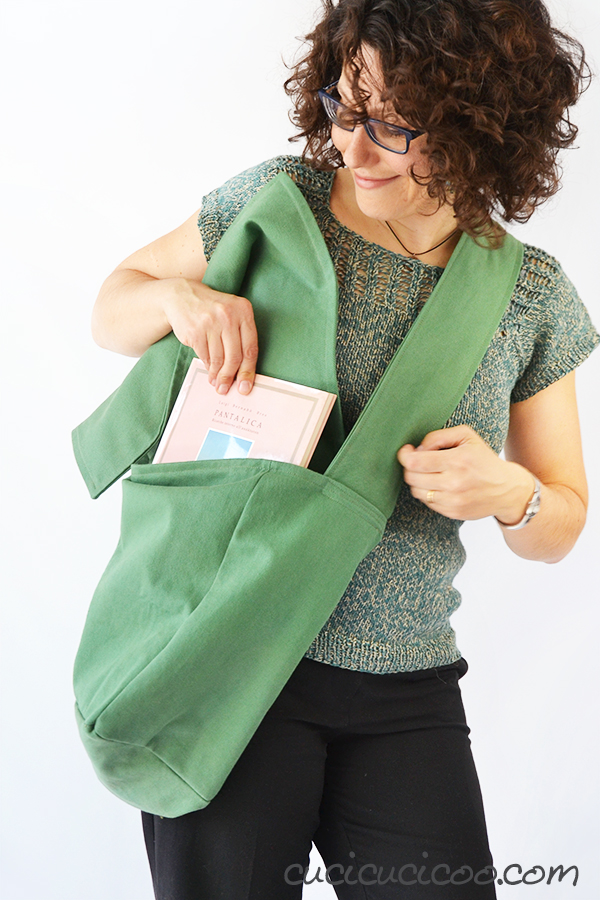 This is one big bag. I’d imagined it as a bag I could use every day, but it’s too big to use like that. However it’s great for when you have to carry around a lot of stuff, such as for an overnight trip. The strap is quite wide and short, but in the end I have to admit that it’s actually pretty comfortable when the bag is full and heavy. 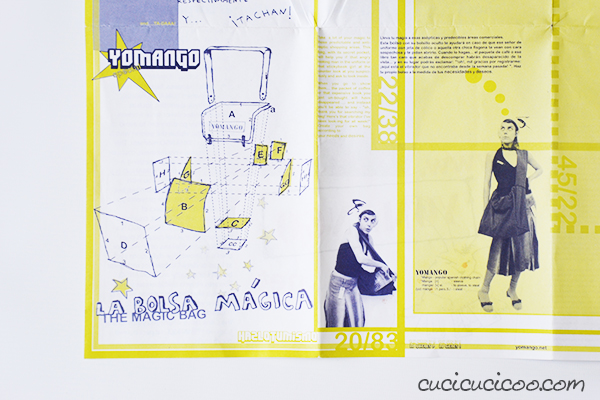 But what is it that makes this bag contemporary art? “Yo mango” means “I steal” in Spanish and also plays on the the name of the famous fast fashion chain store “Mango.” As is explained in the pattern/brochure, this bag is a sort of protest against fast fashion and huge international chain stores, which I have banned from my family’s shopping because they tend to take advantage of human labor, take work away from smaller businesses and pollute on a large scale. 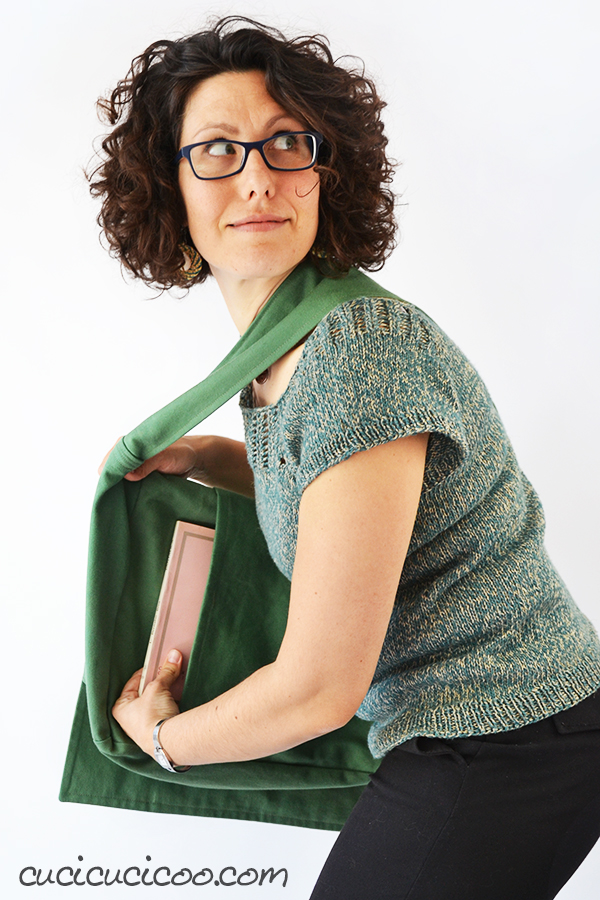 The idea is that, by making your own handmade magic bag for shoplifting, you can protest against the power behind these massive companies by stealing goods from their stores. You see, the back of the bag which rests against the side of your body has a secret flap that opens to a hidden compartment that can’t be seen when looking inside the bag. 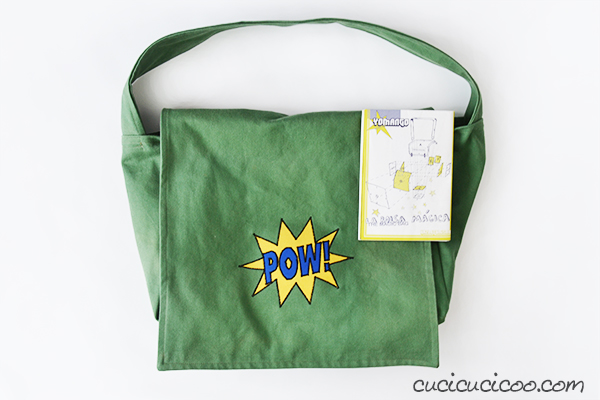 On the outside it looks like a more or less normal bag. 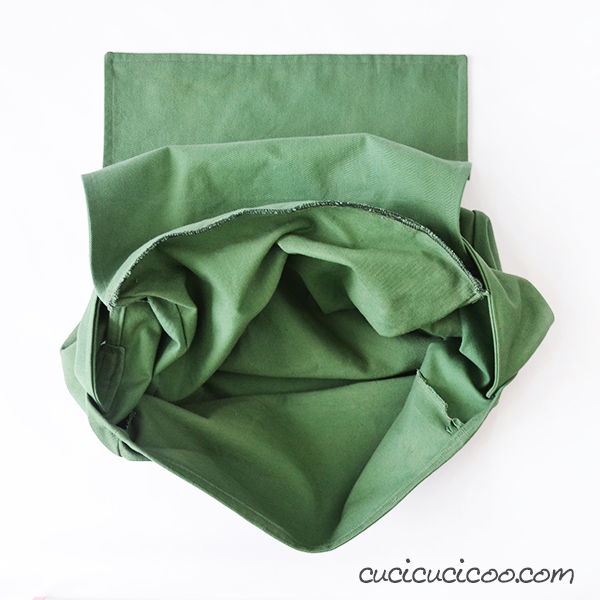 And on the inside you can’t see anything that’s been hidden. (You can see the ugly unfinished seams, which I will talk about in a minute.) 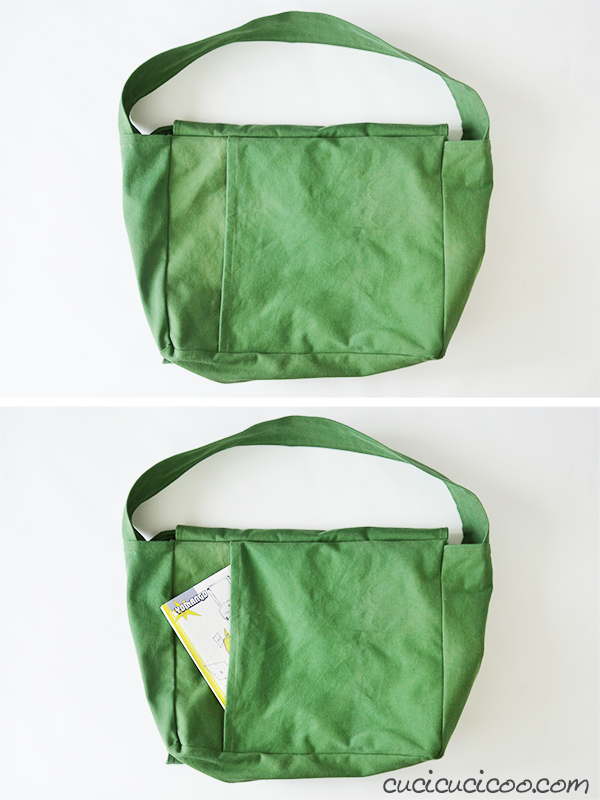 Just from the back can you get into that hidden space in the back of the bag and discover what items have been lifted from the store. 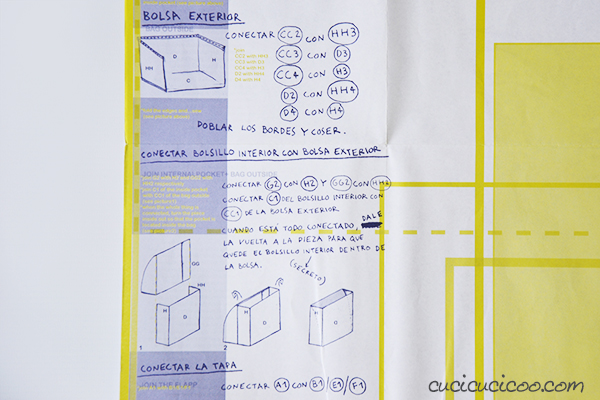 Like I mentioned before, this pattern is clearly made as an art form, not as a professional-quality sewing pattern. The sewing instructions and illustrations were very vague and made no mention whatsoever of right and wrong sides of the fabric, which meant that I had to frequently tear out the stitches and sew the pieces the right way around. It was also difficult because I didn’t have a clear idea of how exactly the finished bag would look. 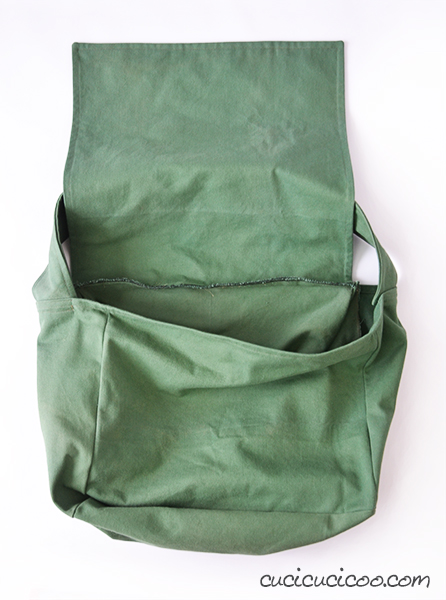 I did eventually work it out, however there were also a lot of exposed raw fabric edges which would unravel if they weren’t somehow finished off. Alas, most of those had already been sewn before I realized that they would be exposed, so I had to do the best I could by overlocking the visible fabric edges after the fact. So the inside of the bag isn’t as pretty and nicely-finished off as it could have been, but I’ll just deal with it.

Ok, before I start getting a bunch of nasty messages and comments, let me state very clearly: I DO NOT CONDONE SHOPLIFTING OR STEALING OF ANY TYPE! I will NOT ever use this bag in that way. Remember, this pattern was part of a conceptual contemporary art exhibit. It is the CONCEPT that is important, not that you actually go out and steal.

I have said over and over again that I am very much against the power that huge international chain stores have, and in particular ones dealing with fast fashion. Over and over, and with few exceptions, they disregard human rights and massively pollute the environment.

So, while I do not suggest that you create a handmade magic bag for shoplifting for actually stealing from your most despised stores (though feel free to make one if you want it for normal use and then just to show to your friends for a laugh, like I do), I DO suggest writing to these companies to voice your opinion regarding their policies, signing petitions to help those being overworked in dangerous conditions, talking to people you know about what happens behind the scenes of the products they’re buying (tell them to watch “The True Cost,” which is incredibly eye-opening), and/or simply refraining from purchasing from companies whose ideals you don’t share. 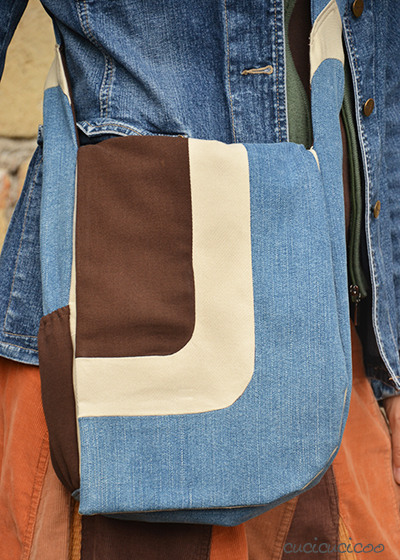 Unfortunately, I have no idea where you could procure this sewing pattern if you’re interested in it. As I said, I got it at a temporary art exhibit over a decade ago and I haven’t been able to find anything online about it. What I can suggest is the wonderful Hands-Free Asymmetrical Bag pattern by Serger Pepper. I sewed this bag from repurposed jeans and trousers and used it constantly until it fell apart. But I miss it, so I think I need to make myself a new one! 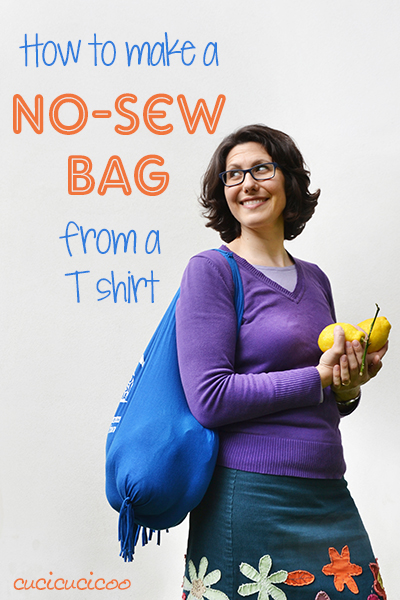 Or, if you want a quick shopping bag without having to sew, grab a T-shirt and scissors and turn it into this super easy, no-sew T-shirt tote bag in just 5 minutes!

Love this post? Pin it so you can come back to it later!

5 thoughts on “Yo Mango handmade magic bag for shoplifting”