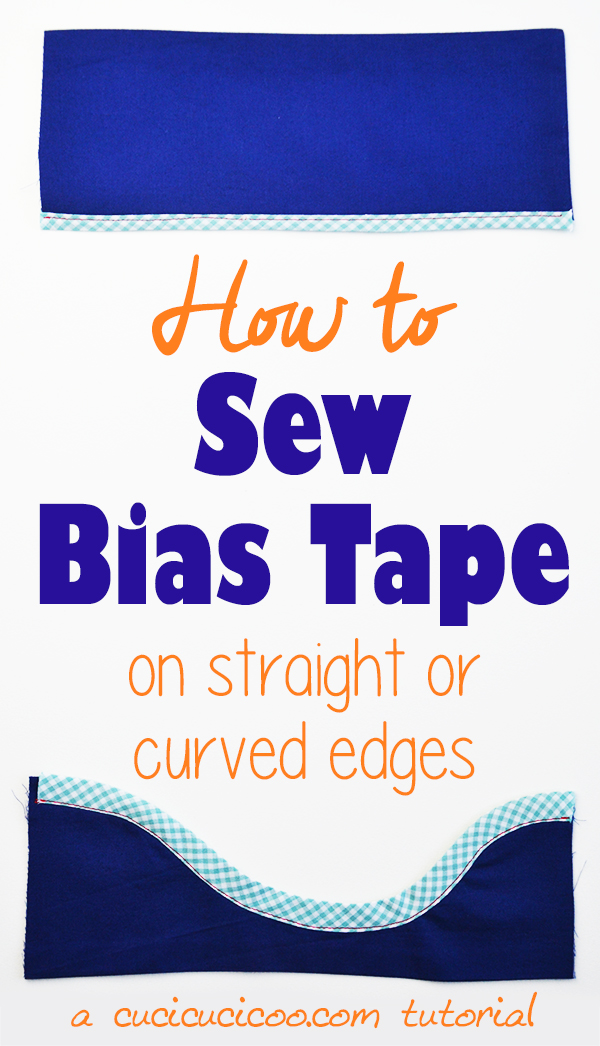 Welcome back to Bias Month here on Cucicucicoo! This month I’m writing a bunch of lessons and tutorials on how to use bias for better sewing. Here is the full list of the Bias Month technical lessons and practical tutorials to practice the techniques on. Just click on any of the links to check them out! 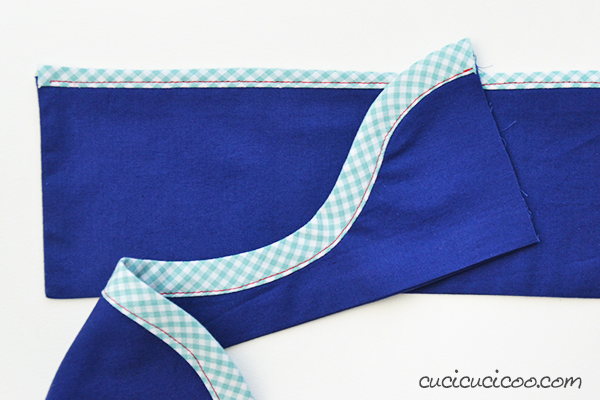 Today I am showing you the most common way that bias tape is used: to bind fabric edges.

This technique is used in virtually all types of sewing and is super useful for protecting the cut fabric edges from fraying, but also as a great decorative element. The width and fabric of bias tape can completely change the feeling of the sewn item, so it can be lots of fun to choose!

And because bias tape is cut on the flexible bias of the woven fabric, it can be modelled around convex and concave curves.

Are you ready to learn how to sew bias tape on curves and straight edges? Well, then let’s get started! 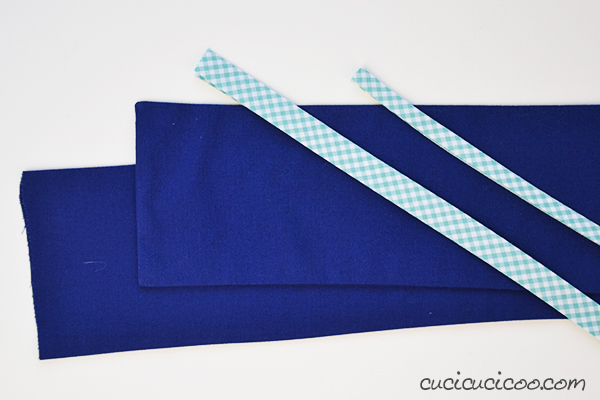 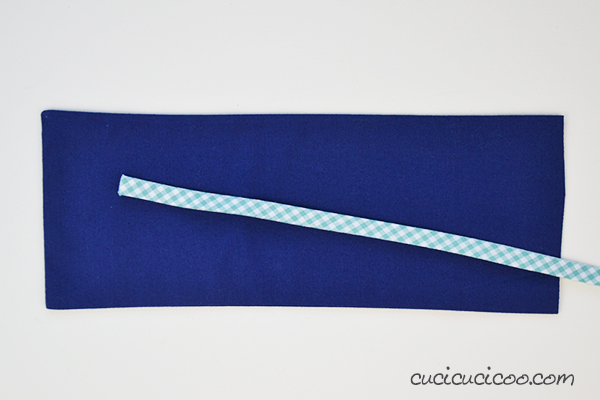 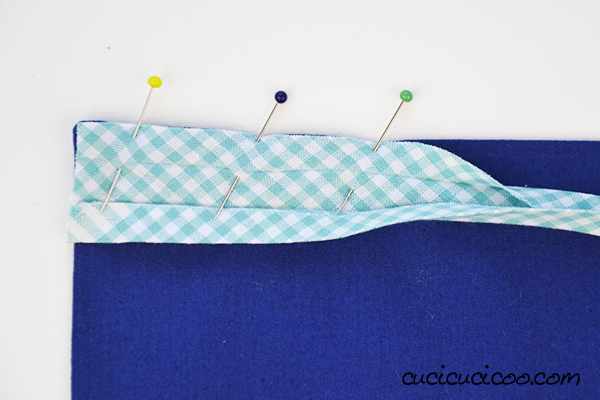 Remember in my posts on making bias tape when I said that it’s better if one side is ever so slightly longer than the other? Now you’ll find out why!

1. Unfold one of the folds at the end of the bias tape. If you made the tape with one side shorter than the other, make sure you use that one.

2. Position the open edge of the bias tape along the edge of the fabric, right sides facing, and pin in place as seen above. 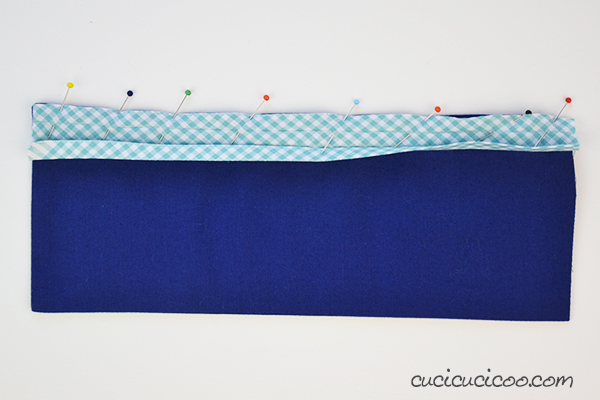 3. Work your way all the way down the edge, pinning in place. 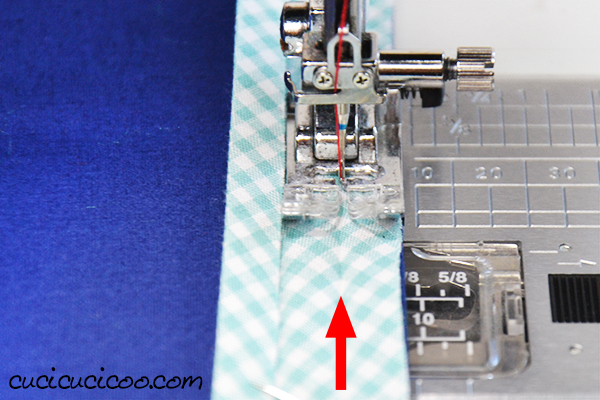 4. Sew down that edge exactly along the fold. I find that the easiest way to do this accurately is to not even consider seam allowance, but simply line up the fold with the center opening in the zig zag presser foot, as seen above.

I used thread of a contrasting color so that it would show up in the pictures, but you’ll obviously want to use a matching color in your future sewing projects. 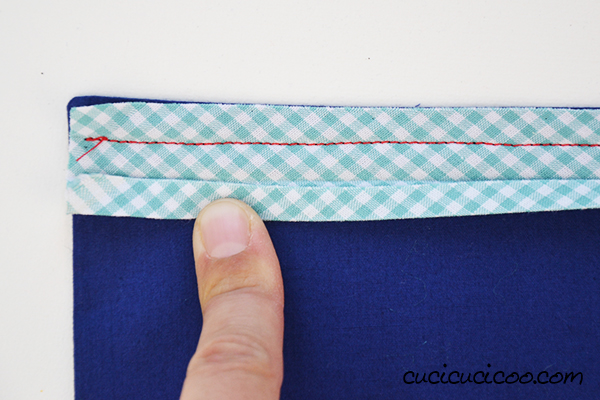 There’s the stitching from step 4. 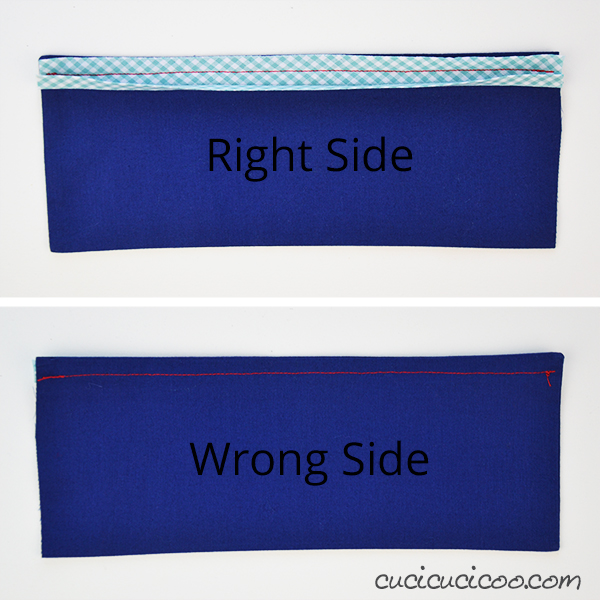 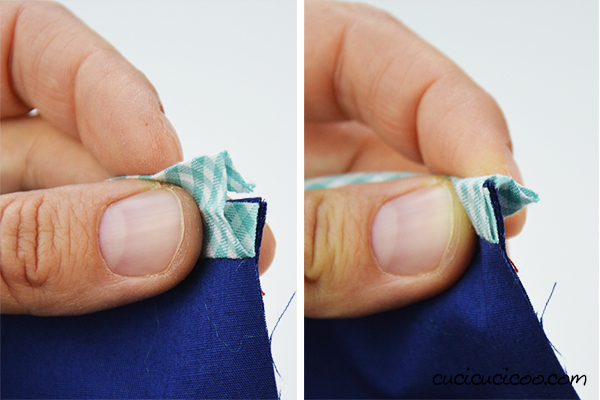 5. Pull the bias tape up along the stitched fold (left) and flip it over to the wrong side (right).

Notice that the center fold of the bias tape will now be right at the top along the main fabric edge. 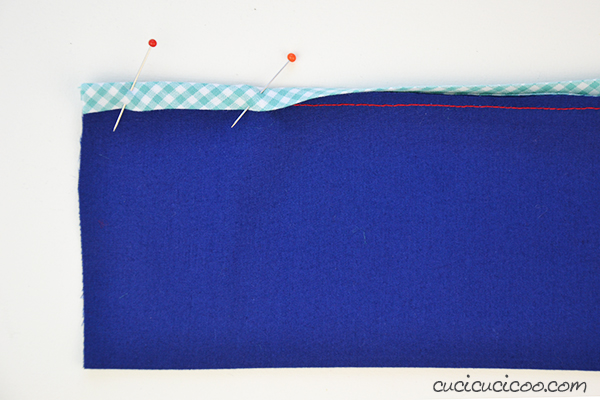 6. Adjust the bias tape on the wrong side so that it covers the stitching from step 4 and pin in place.

If you made your double fold bias tape with both sides exactly the same, you might have trouble covering up the stitching. If you made one side slightly longer, it will be enough to easily cover up that stitching. 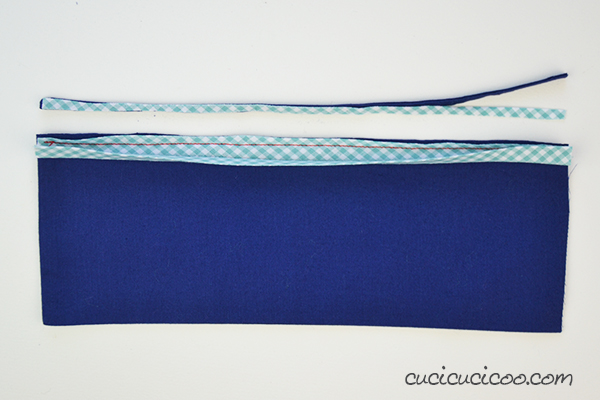 If you find that the bias tape doesn’t reach far enough over to cover the stitching, position the bias tape back the way it was after stitching in step 4 and trim the seam allowance a little bit, but not too much. 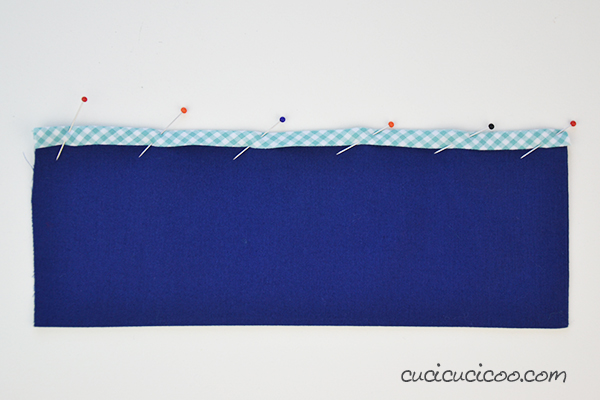 7. Continue flipping the tape over to the wrong side and pinning in place all the way down the edge. 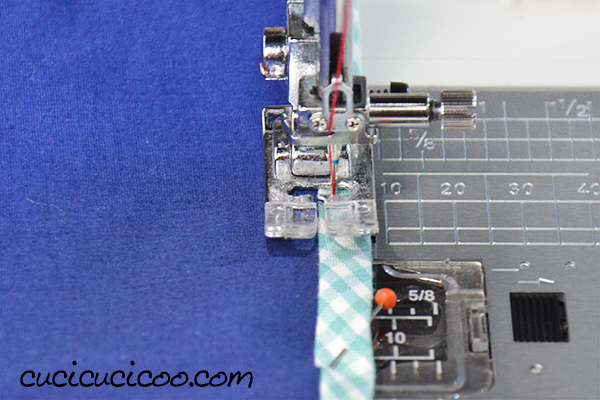 8. Sew down the edge from the right side of the fabric just 1-2 mm from the edge of the bias tape (on the left, as seen above). I like to use a slightly longer stitch for this topstitching.

My favorite way to do this evenly is to line up the bias tape edge with the center opening in the zig zag presser foot and then move the needle over to the right just a little bit, as seen above. (Note that not all sewing machines let you move the needle to the left or right.) 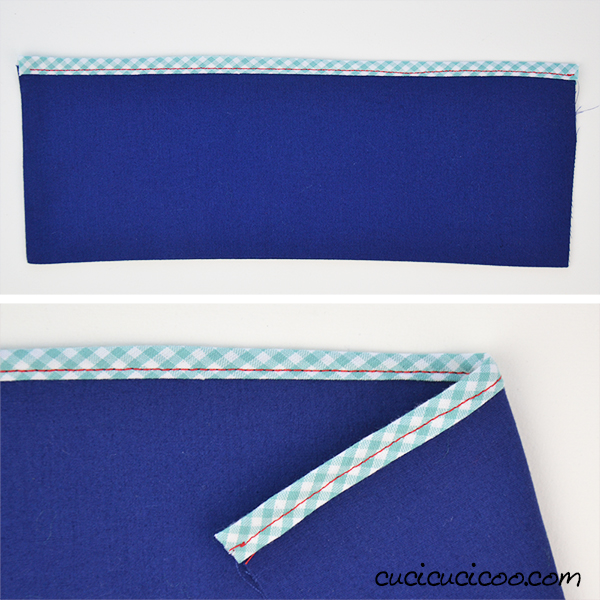 9. Press and steam the bias tape binding with a hot iron, and you’re done! Your fabric edge is perfectly bound in a nice decorative way! (I love the way gingham bias tape looks as binding!)

Notice how the topstitching is slightly closer to the binding edge on the right side than it is to the edge on the wrong side. This is because the bias tape was slightly longer on that back side in order to cover the first line of stitching. 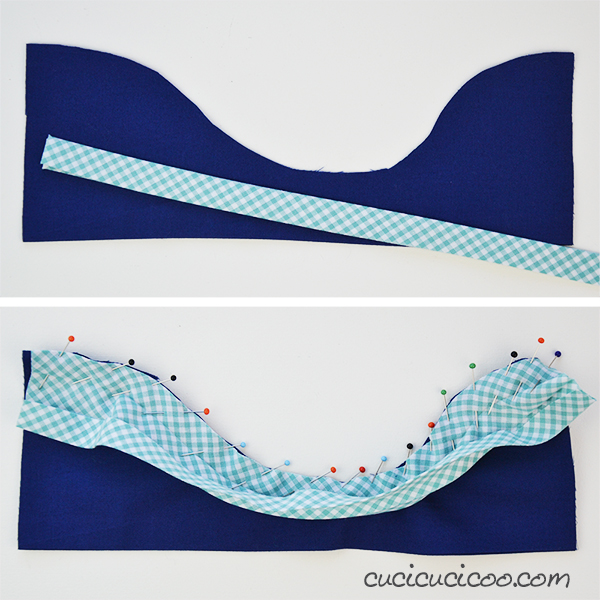 Binding curved edges with bias tape is the same as binding straight edges, but you just need to work a bit more slowly and carefully.

Cut a scrap of fabric with both concave and convex curves, get some double fold bias tape, and I’ll take you quickly through the same steps as before:

Steps 1-3: Unfold the shorter side of the bias tape, line up the edge with the fabric edge, right sides facing, and pin all down the edge. 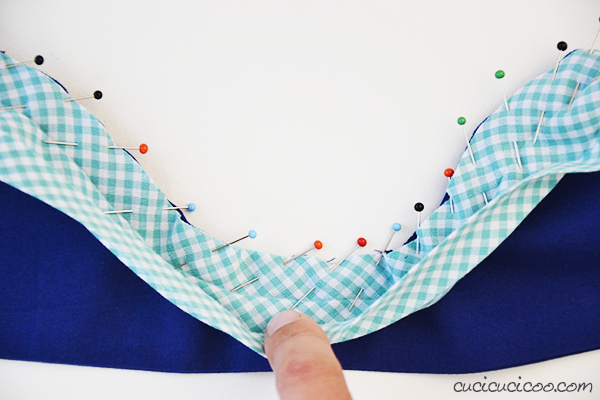 You will get some puckering and/or folding, depending on how tight your curves are. That’s fine. Just go slowly, making sure that the first fold (the one closest to the fabric edge) is flat, and use lots of pins. 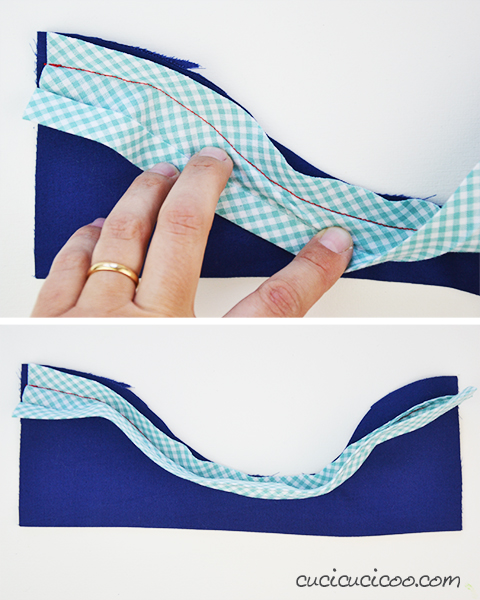 Step 4: Sew along the fold. Again, go slowly and adjust the fabric and bias tape as you go to avoid bunching. It will not look pretty, but don’t worry, we’ll fix that in a moment. 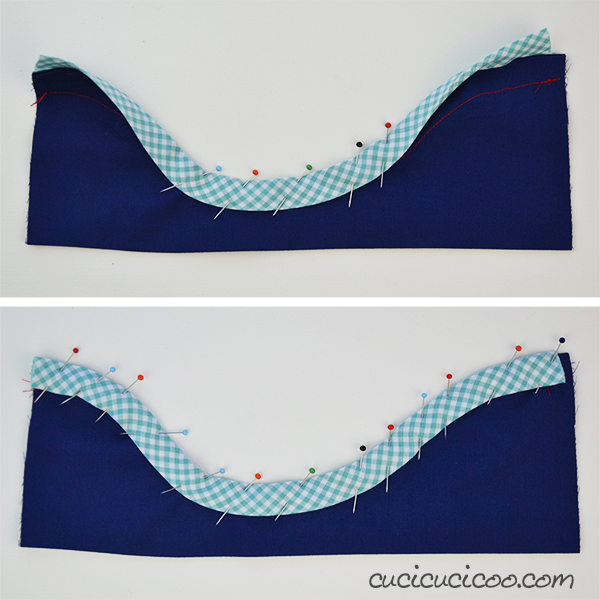 Steps 5-7: Flip the bias tape over to the wrong side and pin in place so that it covers the stitching from step 4. If necessary, trim the seam allowances so that it can reach over enough.

I suggest pinning first in the center parts of the curves (as seen on top) and then working your way outwards (as seen on the bottom). This will help you model the bias tape around the curves better. 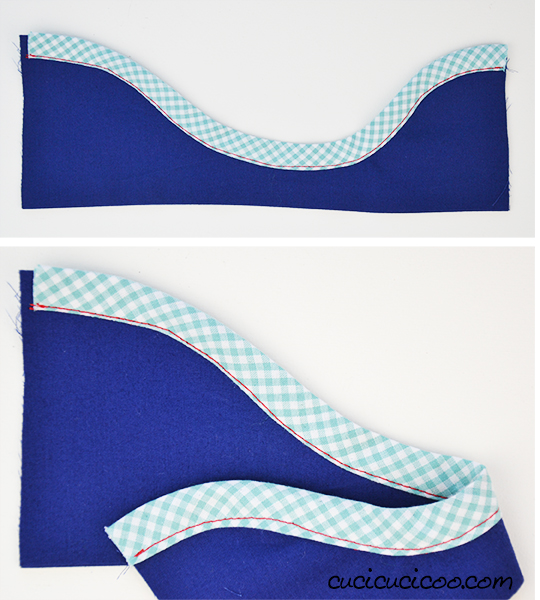 Steps 8-9: Topstitch down the edge of the binding, press and steam it, and you’re done!

You may be wondering why we didn’t clip and notch the curves for this technique. Some people do do this, but I don’t because the fabric edges don’t get folded at all, and the bias tape is flexible enough to stretch or compress around most curves. If you find that the bias tape’s seam allowances are bunching up or not stretching enough, feel free to clip or notch them as needed.

Wasn’t that easy? This type of binding may look difficult, but it really isn’t at all once you get the hang of it, and you will find it incredibly useful for so many types of projects!

Speaking of which, don’t forget to come back next week so that we can start making some real projects with bias tape!

This lesson on how to sew bias tape on curves and straight edges is part of the Cucicucicoo Learn to Machine Sew beginner’s sewing course! Don’t forget to share pictures of your work on Facebook or the Cucicucicoo Creations Flickr Group!