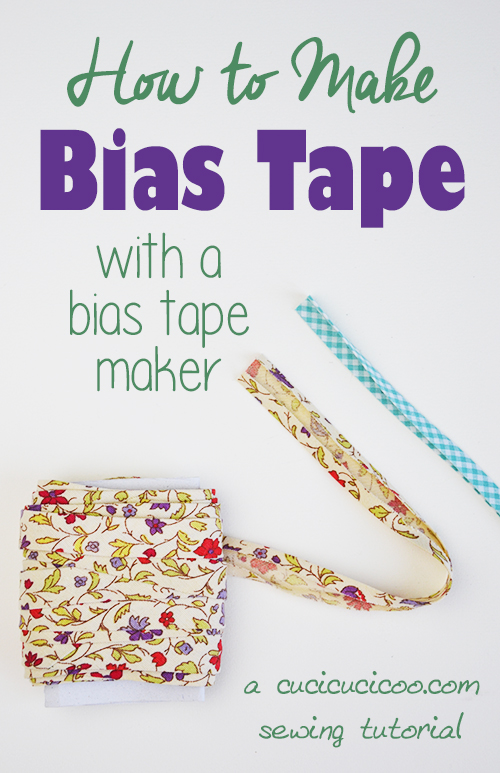 Welcome back to Bias Month here on Cucicucicoo! This month I’m writing a bunch of lessons and tutorials on how to use bias for better sewing. Last time I showed you what bias is and how to make short bias strips and bias tape. This week I’m going to show you how to make longer strips of bias tape with a bias tape maker. 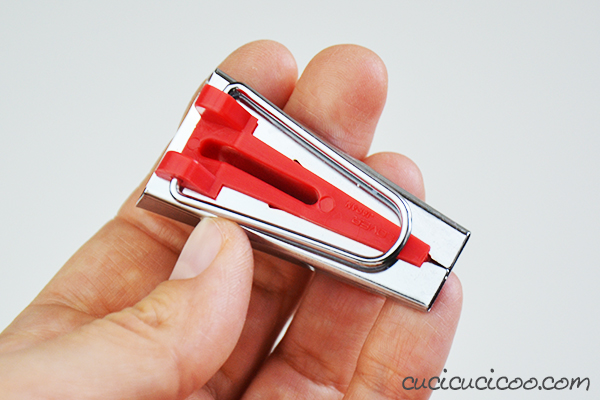 But before we get started, remember to click here to see the full list of lessons and tutorials in the Bias Month directory! 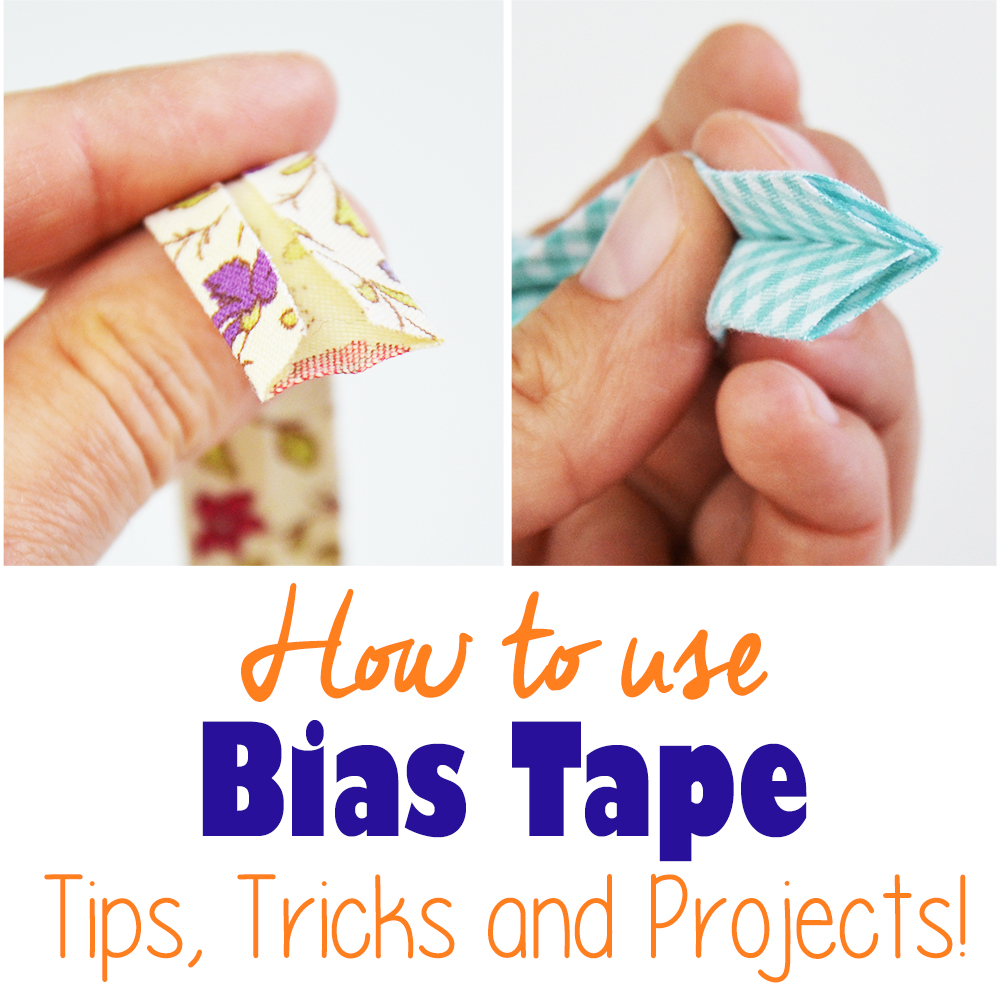 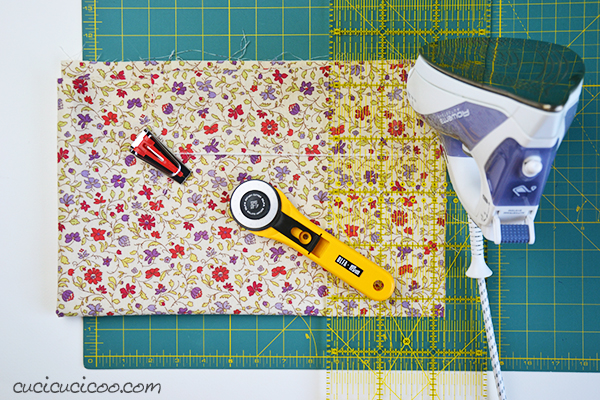 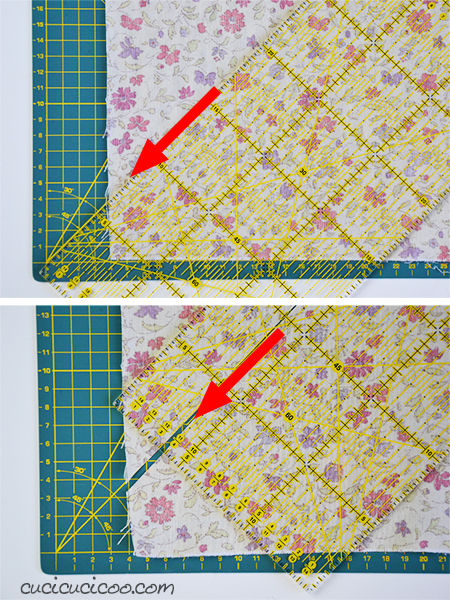 1. Position the fabric on the cutting mat* so that you can make cuts at 45°. In this post I’m showing one way to position the fabric (lining up the fabric with the grid and cutting along the 45° line), but I personally find the way I showed last time to be easier. I suggest trying both to find which you prefer. Make the first cut with the rotary cutter* (top).

3. Continue to move the quilting ruler over so that the previous cut lines up with the 36 mm line, and make another cut. 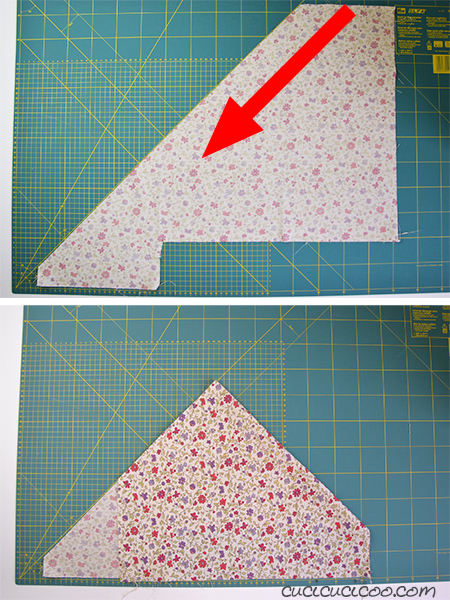 If your cut of fabric is relatively large (longer than the quilting ruler), you can fold it once you’ve made the first 45° cut. Just fold one edge down to the other along the 45° angle line… 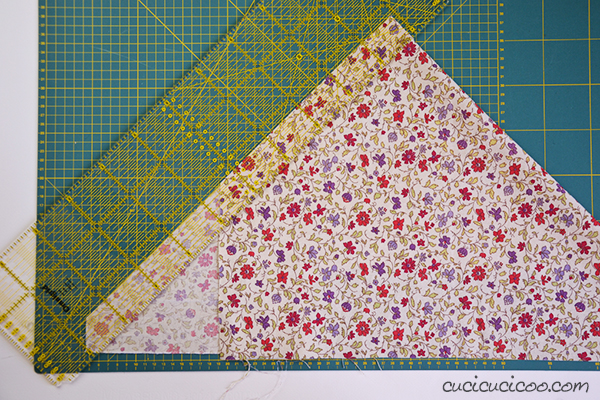 … and contine to make cuts at the necessary width.

Cut as many strips as you want. 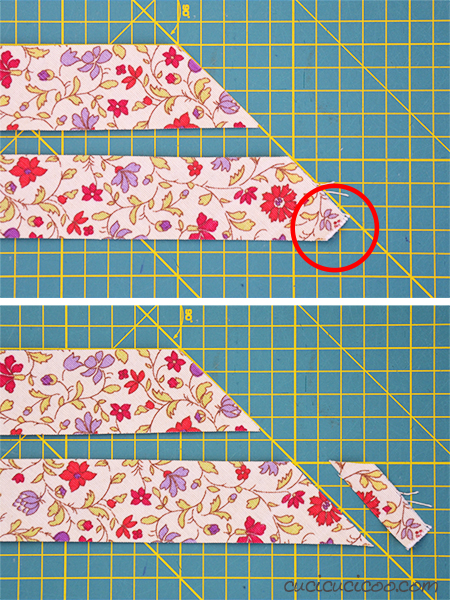 If you cut the strips from a rectangle, the strip ends will be at 45° angles. If any of them have an end that is not a perfect 45° angle (such as the one circled above), just line it up on the cutting mat and trim it off (as seen on the bottom). 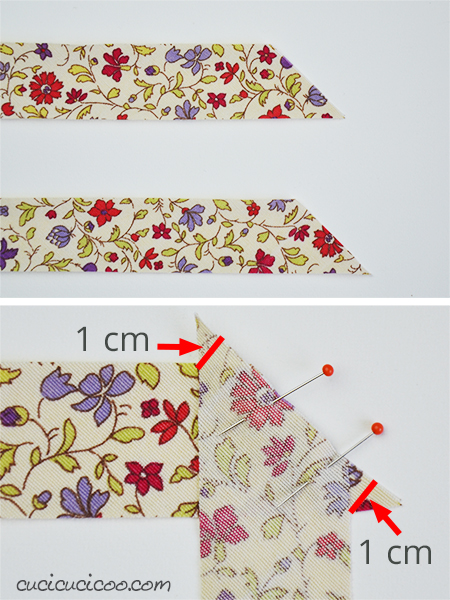 1. Start with two strips with ends that are angled in the same direction (top). Flip one wrong side up and line up the angled edges as seen at the bottom. Do NOT line up the very tips! They need to stick out so that there is 1 cm (or whatever seam allowance you are using) between the angled edge and the point where the other strip meets the straight edge (shown above by the red lines).

Pin the strips together. 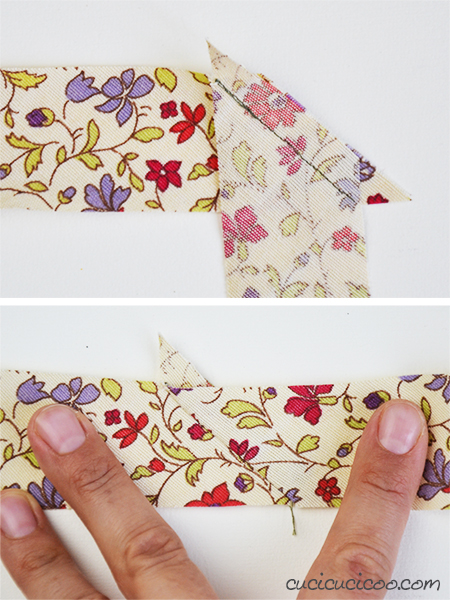 2. Sew the strips together at the chosen seam allowance, so in my case 1 cm. Notice how the stitching goes from one corner formed by the two strips across to the other corner.

This method may not make much sense to you, but when you flip the strips right side up, you’ll see that they match up perfectly! 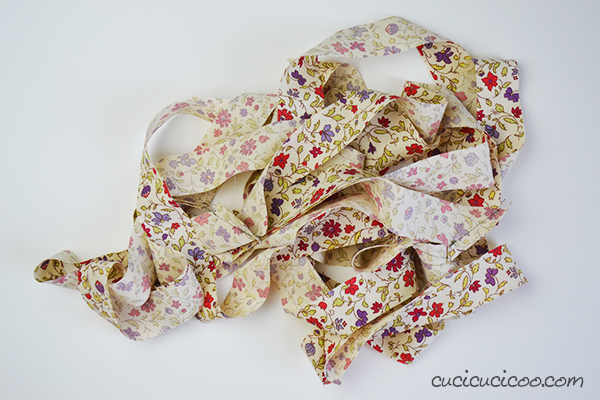 3. Continue joining each strip to each other until you have one long strip. 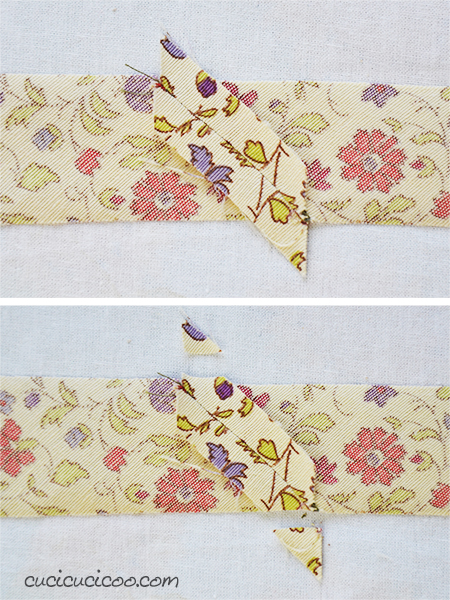 First prepare your long fabric strip. Heat up your iron at the highest heat and steam setting possible. Iron open each seam on the wrong side of the fabric (top), then trim off the little tips that stick out over the edge (bottom). 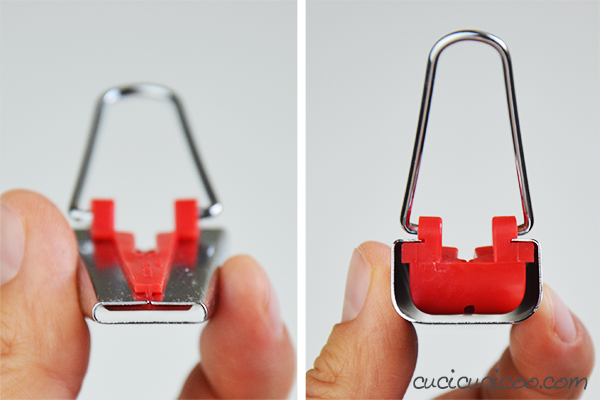 Let’s take a look at the bias tape maker. On the left above you can see the end where the tape comes out, nice and flat. On the right, you see the wider end where you feed the fabric in. The little handle is to hold on to so that you don’t burn your fingers with the iron. 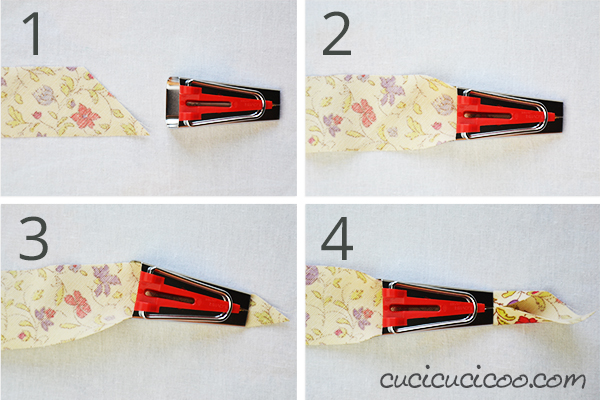 1. Find the angled end of the bias strip and lay it flat on the ironing board, wrong side up.

2. Slide the end into the bias strip maker as far as it’ll go.

3. Stick a pin through the long slit at the top of the maker to push the fabric through enough so that the very tip is sticking out.

4. Pull the end of the strip out enough that you can straighten it out and hold onto it. 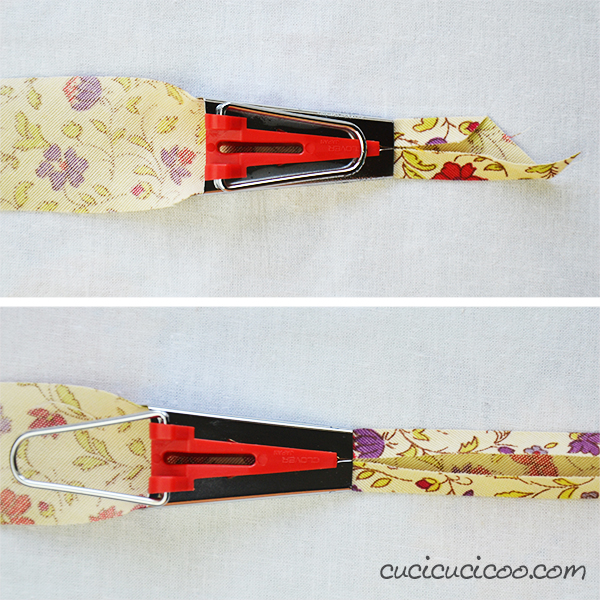 5. Iron the strip as you pull it out of the maker to heat press the folds over.

6. Use the handle to pull the bias strip maker to the left, ironing as you go.

I highly suggest NOT dragging the iron, but picking it up and placing it back down. Dragging it can stretch the bias tape out of shape or create deformed folds.

This is how I iron the bias tape: I place the iron on the first bit of bias tape, right up to the maker. With the iron still down, I pull the handle a little bit to expose more bias tape. I pick up the iron and put it immediately back down on top of the newly exposed tape. Continue this way until you have at least 15 cm (6″) of pressed tape. 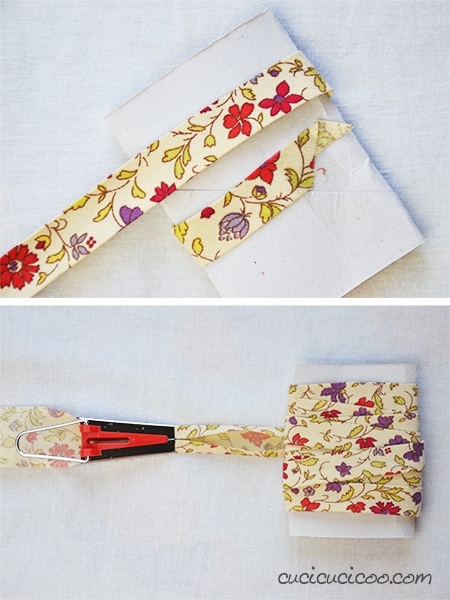 At this point I tape the end to a flattened toilet paper tube and start winding the bias tape around it. As I iron more bias tape, I continue to wrap it around the tube. This not only keeps the bias tape orderly and ready to be stored, but also keeps the newly ironed tape flattened so that the fabric can cool down with the folds in place, helping them set. 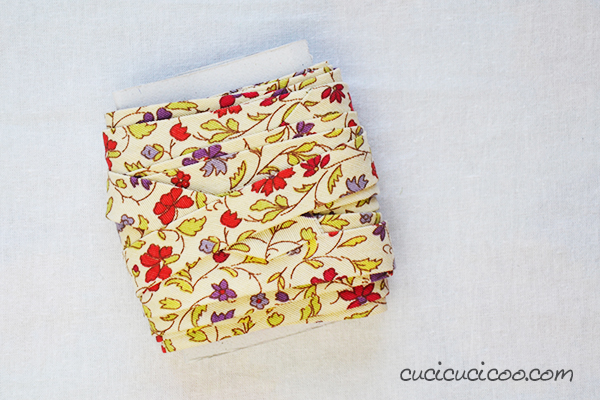 Continue this way until you’ve ironed the entire strip of fabric. Tuck the end under the other layers to hold it in place.

Isn’t that pretty? This was a fabric that I never liked that much, but I much prefer it as bias tape! 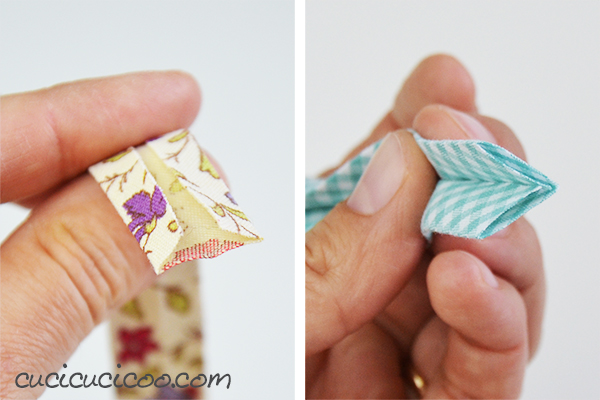 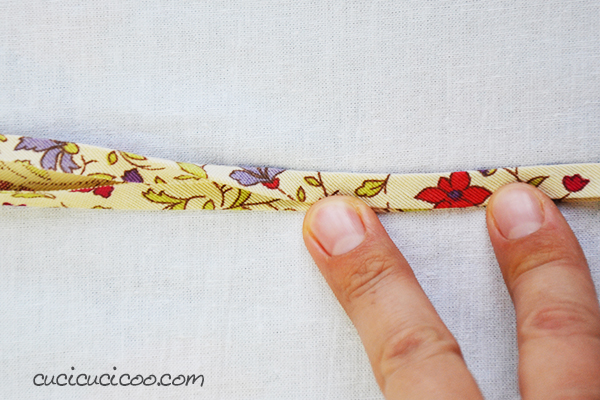 To make double fold bias tape, fold the single fold bias tape in half lengthwise and iron it flat. If possible, fold it so that one side is slightly longer than the other, even just 1 mm. This makes it easier to sew clean bindings. 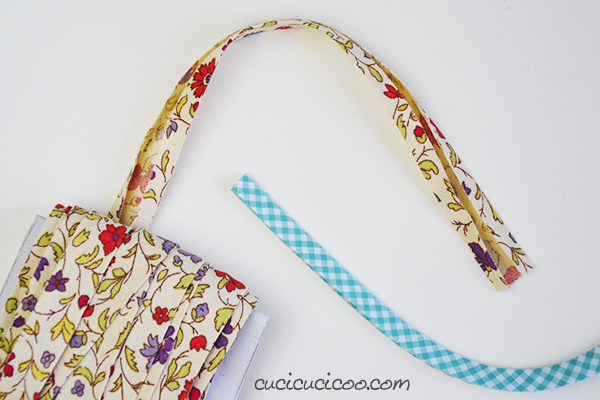 Ta da! Now you have bias tape all ready for your next project!

I will show you a trick in another tutorial for turning a square or rectangle of fabric into a TON of bias tape without having to keep matching up the angled ends. But the technique that I’ve showed you today is great when you’re making bias tape out of odd-shaped or smaller pieces of fabric.

Come back in another few days and I’ll show you how to start sewing with double fold bias tape! Yah!

In the meantime, click here to see everything in the Bias Month directory!

This lesson on how to make bias tape with a bias tape maker is part of the Cucicucicoo Learn to Machine Sew beginner’s sewing course! Don’t forget to share pictures of your work on Facebook, Instagram or any other social media with the hashtags #cucicucicoo and #cucicucicoopatterns!