Home » Tutorial (tutti) » Corso Impara a Cucire a Macchina » How to hem with bias tape – Easy and fast! 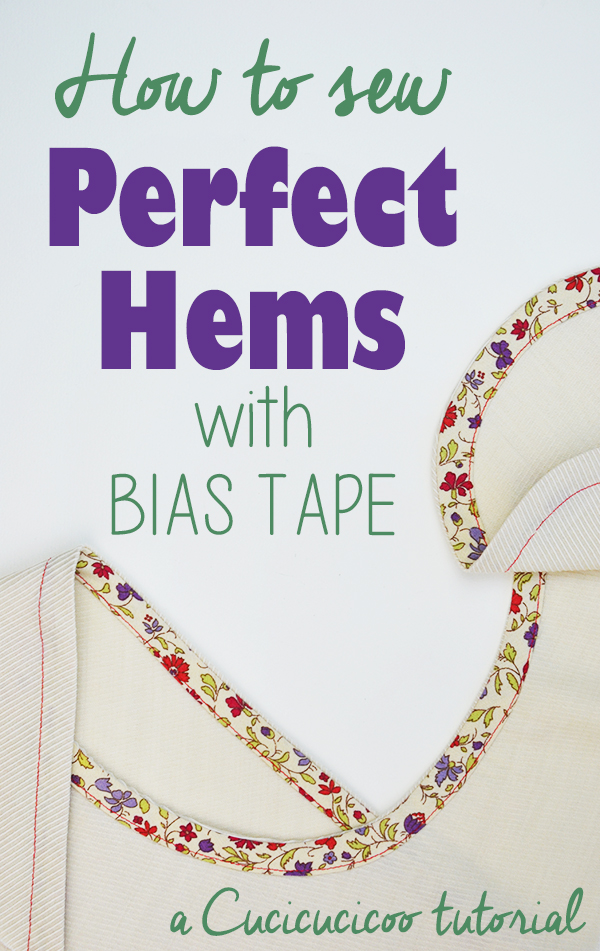 I don’t know about you, but my least favorite part of a sewing project is usually hemming.

I’m not sure why, because it’s really not difficult (and I even shared a great trick for sewing perfect hems here). But I know that I’m not alone here because I’ve heard lots of other sewists say the same thing.

Luckily, there’s a way that you can sew perfect hems, even on curves, without all the measuring, ironing and pinning and I can sum it up in two words: 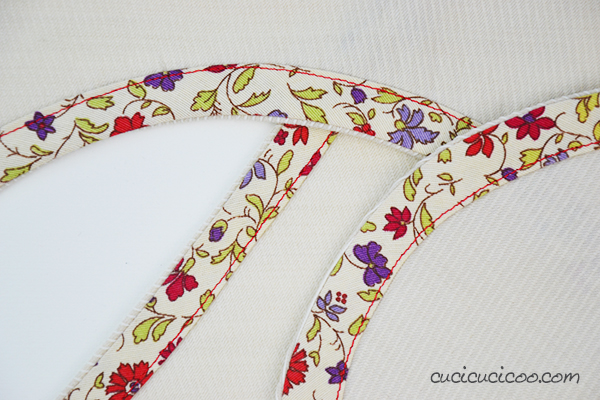 Yes! This is one of the easiest ways immaginable to sew a hem and as a bonus you get a cool decorative element hidden on the inside of your project. (That is, if you use a contrasting bias tape. If you don’t want it to be easily noticeable, just use a matching bias tape.)

Just look at how perfectly those curved edges are hemmed in the picture above. That’s pretty much impossible to do with classic hemming, but a cinch when you hem with bias tape. You don’t need any fancy tools or know-how to do this and it’s so quick and simple to do.

So of course I had to include this technique in my Bias Month series! Here is the full list of the Bias Month technical lessons and practical tutorials to practice the techniques on. Just click on any of the links to check them out!

Want to find out how to hem with bias tape in just a few minutes? Well then, let’s get started! 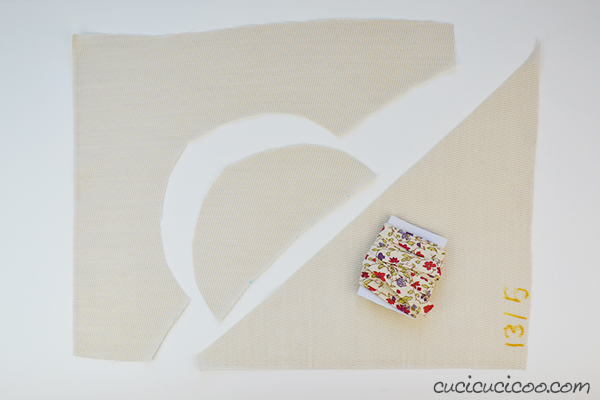 Don’t know what bias tape is? Read this post to find out what the bias is, why it’s so useful and what the difference between single fold and double fold bias tape is.

You can use store-bought single fold bias tape or read this post to find out how to easily make your own bias tape! 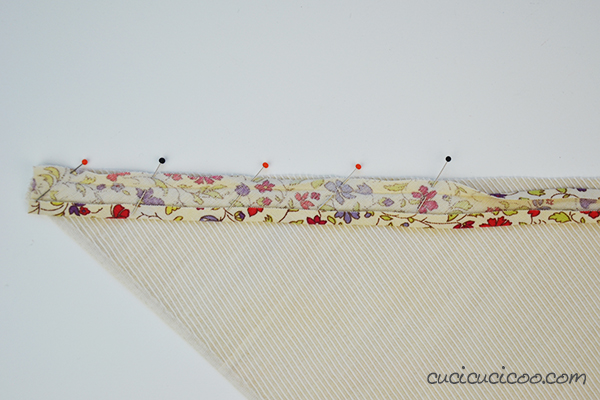 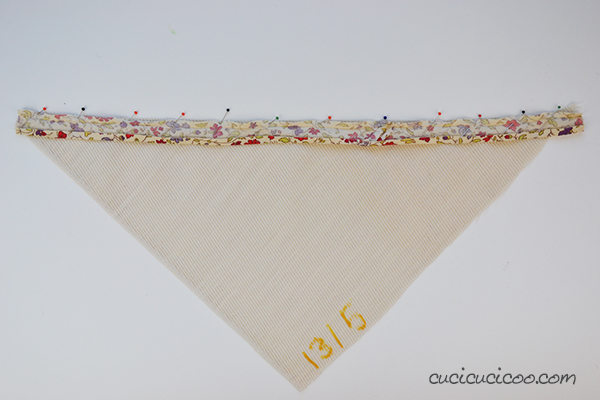 2. Continue lining up the bias tape edge with the fabric edge, pinning in place. When you get to the end of the edge to be hemmed, trim off the bias tape. 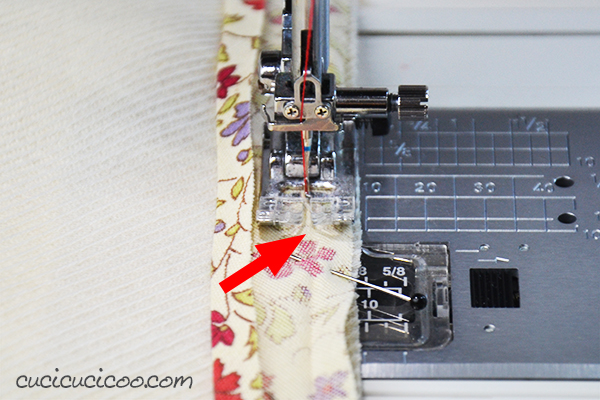 3. Sew the bias tape in place right along the fold.

Don’t pay attention to the seam allowance grid on your machine. Feed the fabric under the presser foot so that the fold goes right into the center slit on the foot and therefore right under the needle.

(You will obviously want to choose a matching thread color. I chose a bright contrasting color so that it would show up better in the pictures.) 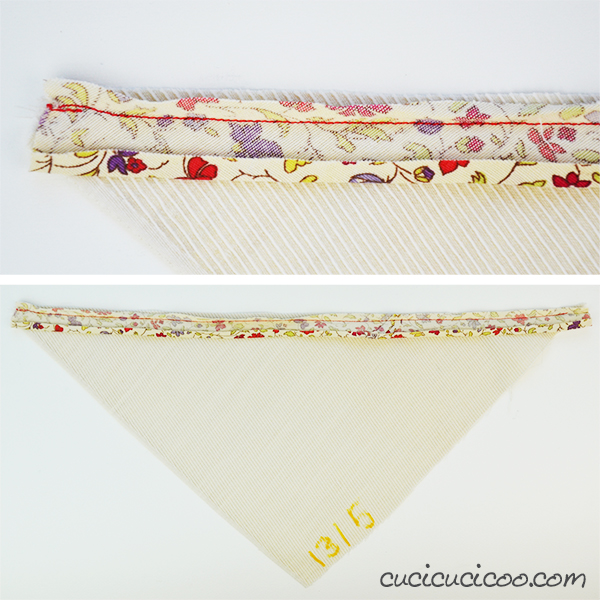 This is what your piece will look like now from the right side of the fabric. 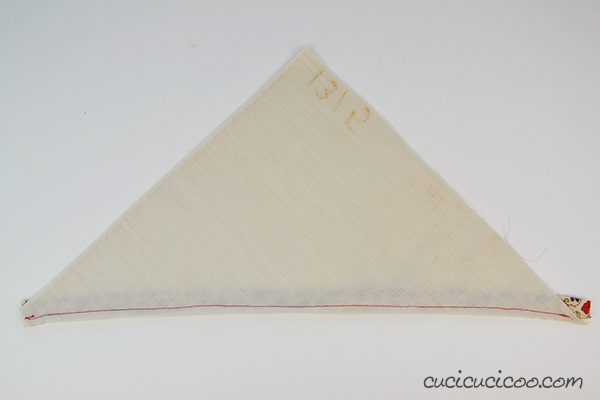 4. Flip the fabric wrong side up. 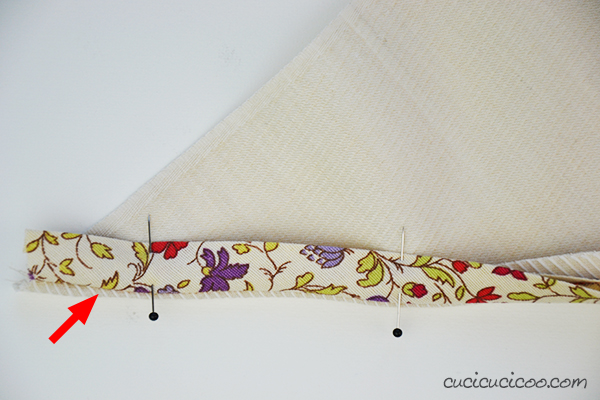 5. Starting at one end, flip the bias tape up to the wrong side of the fabric and pin in place.

You can fold the fabric right on the seam from step 3, and like this the bias tape will go right to the edge of the fold. I prefer to leave a little bit of fabric as a margin at the edge, as the arrow shows in the picture above. Just 1-2 mm is fine. It’s up to you. 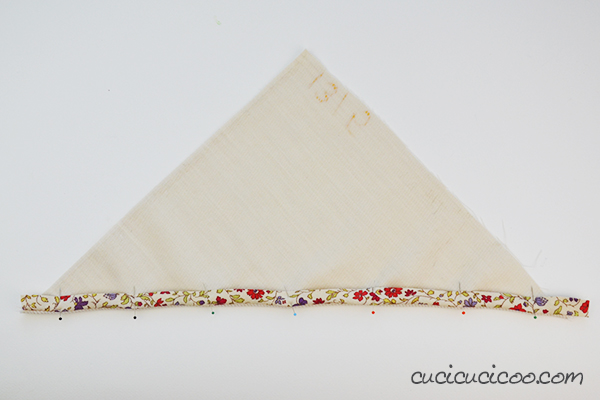 6. Continue flipping the bias tape up and pinning in place.

It’s probably best to give the fabric a quick pressing now, but I’ll be totally honest… I rarely do at this point. What can I say? I’m lazy and like shortcuts! 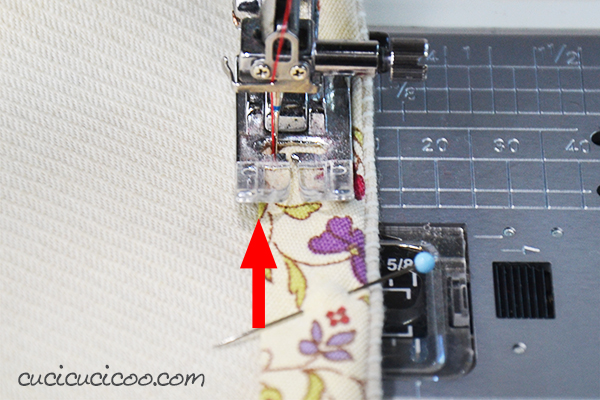 My usual way of doing this is feeding the fabric under the presser foot so that the left edge of the bias tape hits the mark on the presser foot shown by the arrow above. I then move the needle to the left so that it’s super close to the edge of the bias tape. Do note that not all sewing machines allow you to move the needle, so find a way that works for you! 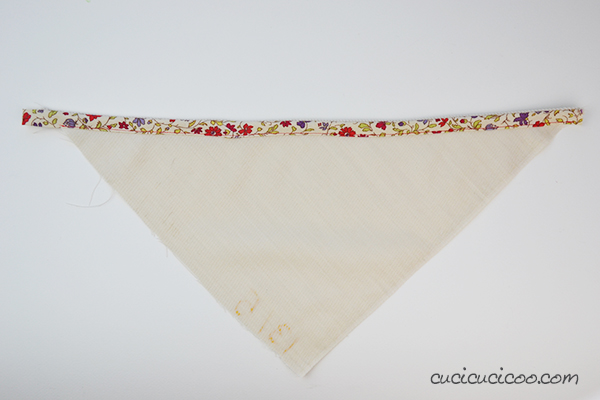 Give your hem a good pressing with as hot and steamy an iron as the fabric allows, using a pressing cloth if necessary, and you’re done! See? Wasn’t that fast and easy? And I love that you don’t have to measure even once! 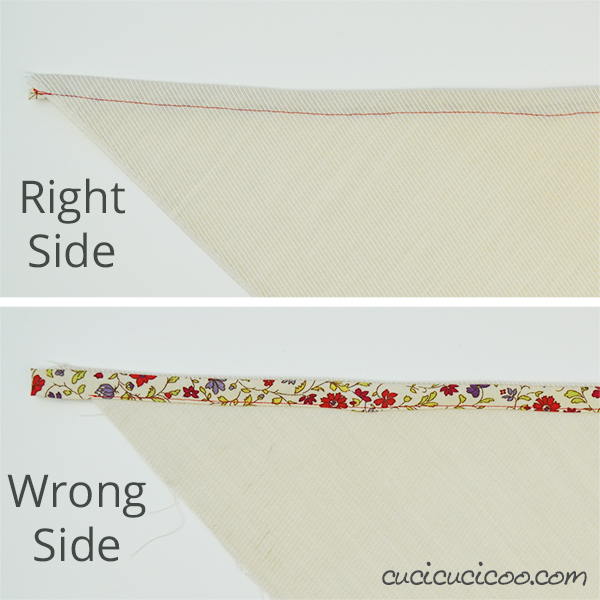 On the right side you just see one line of stitching, and if you used a matching thread color it likely won’t be very noticeable. On the wrong side, you see the strip of bias tape, which I think makes a wonderful decorative finish.

Notice that the distance of the visible stitching from the fabric edge depends on the bias tape width. So if you want the stitching to be close to the edge (such as in more delicate garments and fabrics), use a narrow bias tape. And vice versa, if you prefer a wider hem, use a wider bias tape. 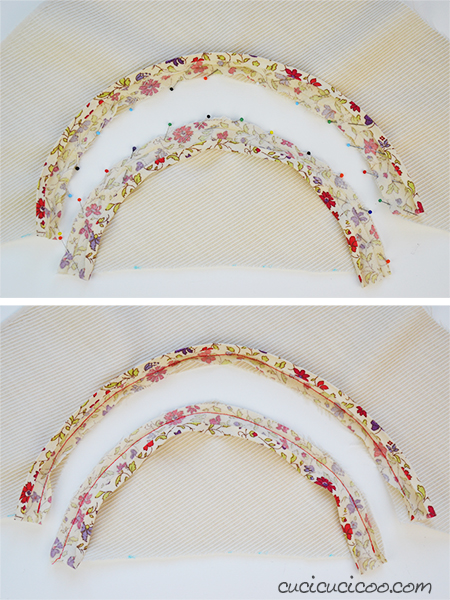 Hemming a curved edge with bias tape is exactly the same as hemming a straight edge, though it may feel a bit trickier because the fabric doesn’t lay nice and flat. However this is hands down one of my favorite ways to finish off a curved edge because you can work around the curve without weird points forming in your seams.

As we did before, first pin the bias tape on the fabric edge, right sides facing, working your way from one end to the other. Then sew down the inside of the bias tape fold. 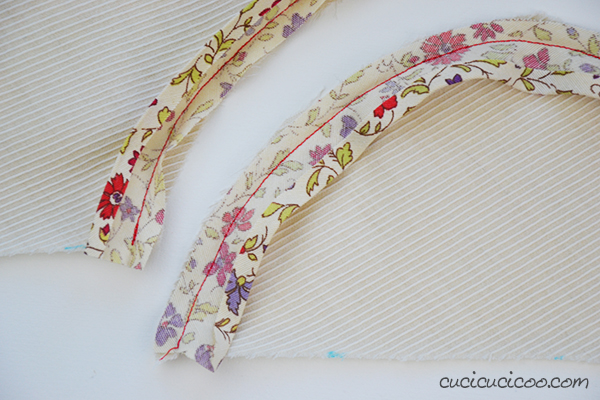 As you can see, the bias tape is flexible to get molded around the curved edges, but you will definitely see some buckling and bunching. Don’t worry about it. Just work slowly and adjust the fabric as necessary as you pin and sew.

Do note that the tighter the curve, the more work it will take to ease the bias tape around it. Depending on how tight the curve is, you might also want to clip and notch the curves of the bias tape’s seam allowance to make the next step easier. 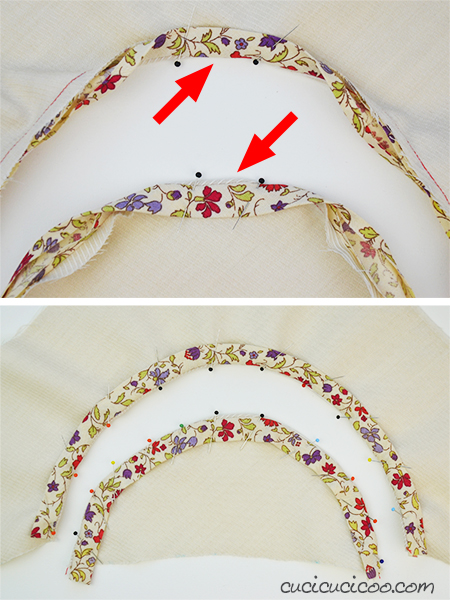 Start folding the bias tape up to the wrong side of the fabric from the center of the curve, then work your way out. 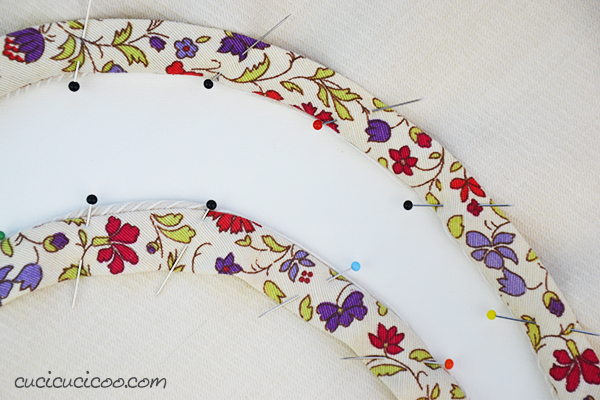 See how the bias tape buckles between the pins along the convex curve? Use as many pins as necessary to make it as flat as possible. 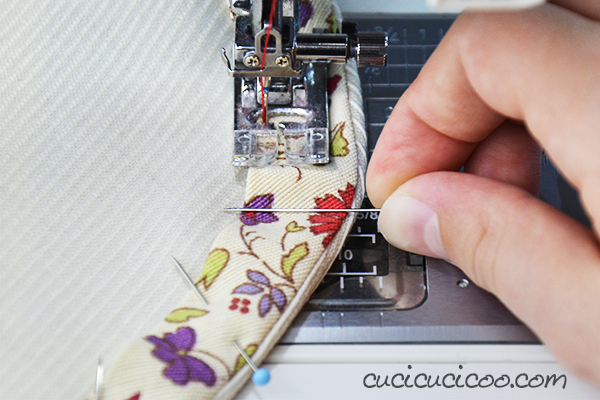 When you sew the bias tape down to the wrong side, use a pin to press down the parts that buckle up and sew over them slowly. If you work carefully and slowly, pushing down parts that stick up little by little, you’ll be able to sew the curved bias tape without any ugly fabric folds. 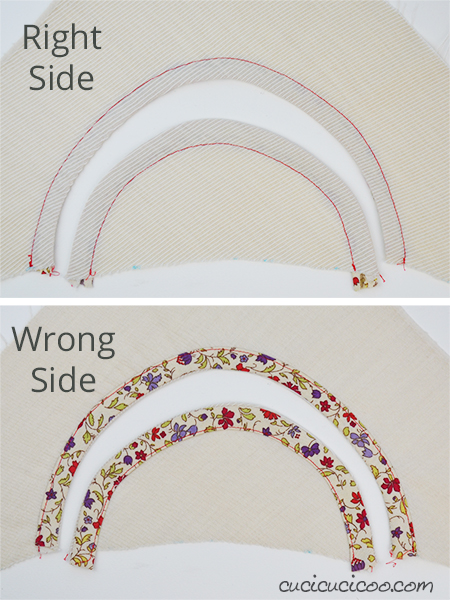 When you’re done, give the hem a good hot pressing with as much steam as the fabric can handle, and you’re done!

(By the way, my curves are a little wonky because I cut the fabric curves wonky in the first place! After all, these were just practice pieces!) 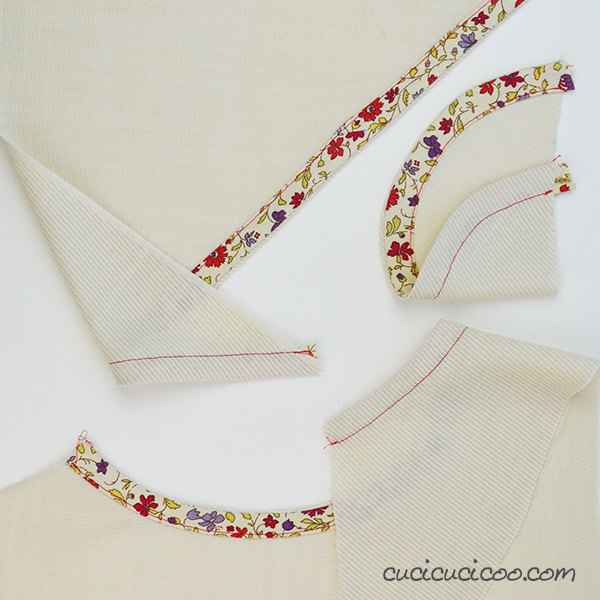 I love this technique because it’s so quick and easy, and I don’t have to stand there at my ironing board for ages measuring and pressing. This is especially good in the hot summer months! But it’s also an incredibly easy way to hem those more complicated curved edges perfectly. And I also really love the effect of a colorful contrasting strip of fabric on the inside of a garment’s hem! It’s like a little hidden treasure! 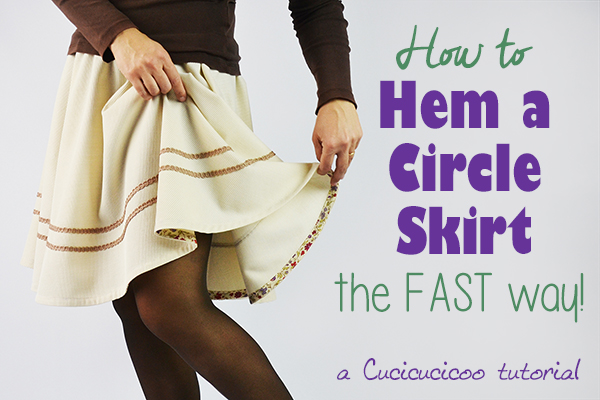 Now that you know how to hem with bias tape, put the technique to use finishing off what I consider the most annoying garment ever to hem: the circle skirt! Click here to find out how! Trust me, once you learn this technique, you’ll start sewing dozens of circle skirts!

This lesson on how to hem with bias tape is also part of the Cucicucicoo Learn to Machine Sew beginner’s sewing course! Don’t forget to share pictures of your work on Facebook or the Cucicucicoo Creations Flickr Group!