I love Pinterest. I think most anyone could spend hours and hours on it every day. So many amazing ideas, techniques, inspiration and help for DIY and life in general. But sometimes there is a slight problem with Pinterest: your version doesn’t look anything like the Pin. Which is why I created “Pintastic!”, a series of tested Pinterest tutorials, reviewed by me.

Some of those absolutely fantastic ideas are not so easy to actually re-create yourself. I’m willing to bet that you have had at least one well-intentioned Pinterest fail.

A couple of years ago I totally bombed the string balloon art project like the one below, among many other projects. In fact, it’s so common that there are loads of websites, like CraftFail, and random articles full of images of Pinterest DIY fails.

Seriously, if you need a good laugh, check out those links. Whenever I look at one of those sites, I laugh until my stomach hurts and tears are running out of my eyes. Mostly because the fails are just so hilarious (as well as the captions), but also because I’ve made so many of those Pinterest fails, myself!

But a lot of the times these Pinterest fails have nothing to do with the person’s ability, but with incorrect instructions. How frustrating is it to try to recreate some awesome project, only to be baffled by the instructions, or to find that it just isn’t working as described?

This is exactly why I decided to create this new series here on Cucicucicoo, “Pintastic!” I will take it upon myself to try out cool-looking projects that I’ve found on Pinterest and give my verdict as to how do-able it is.

That way, you can find a bunch of great tested Pinterest tutorials right in one place, and you can start work on them knowing if you can trust the tutorial’s instructions or if you have to keep something in mind when creating it.

Update 2019: Originally this post showed the “Tried it!” feature. However this feature has been discontinued by Pinterest, so I have deleted those parts of this post.

So, without further ado, here are the Cucicucicoo-tested Pinterest tutorials! Just click on any of the images or “Continue Reading” buttons to read the review post! 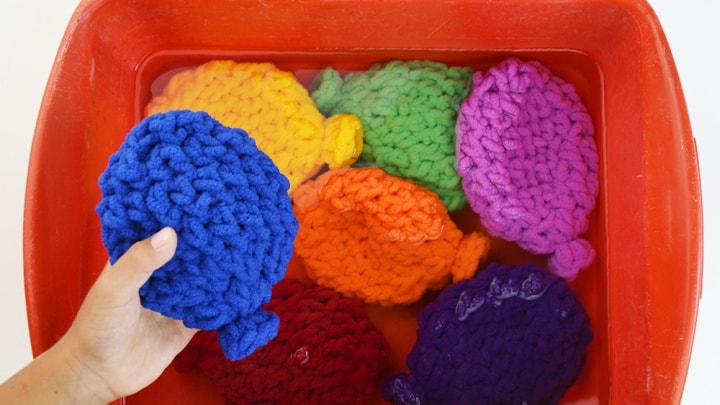 Can crochet reusable water balloons REALLY work?! And how?? I tested it and found out that these balloons are easy and fast to create, are lots of fun, are ecological, and make for fabulous DIY gifts! 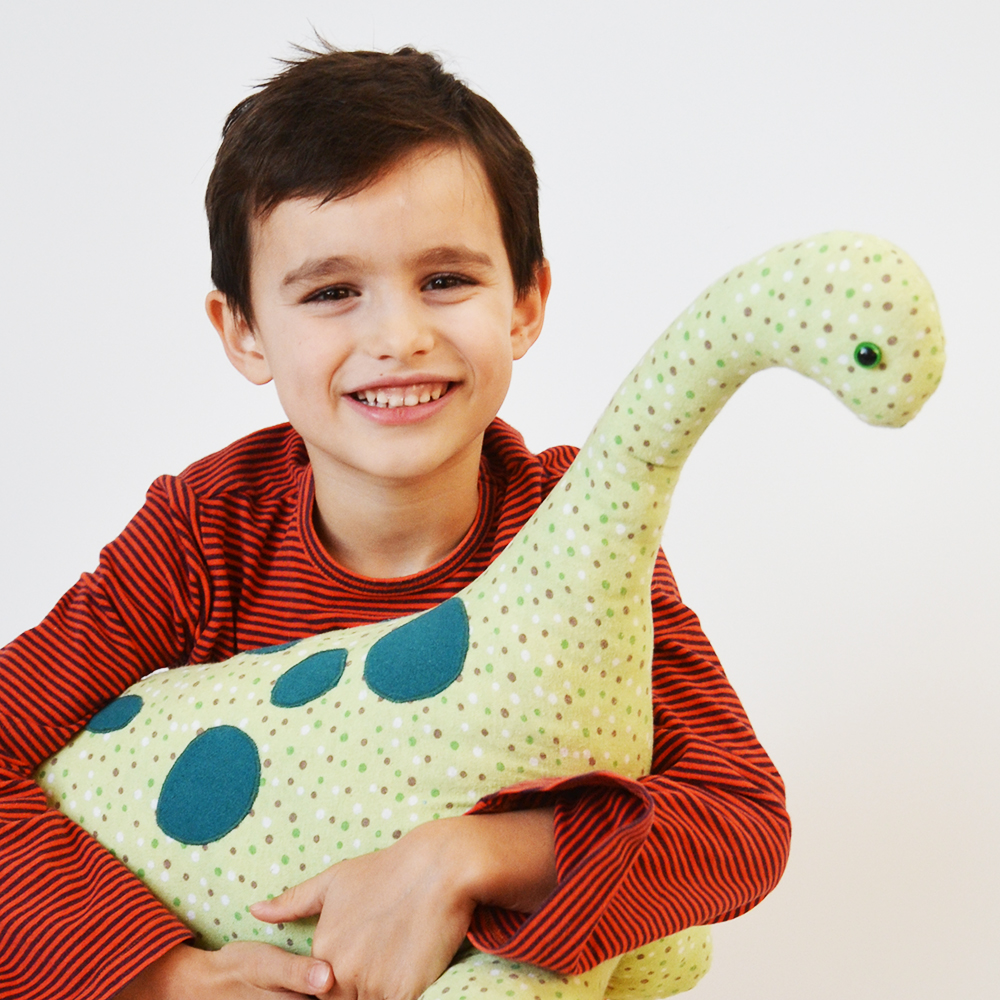 If you've got a dino-lover in your family, this massive stuffed dinosaur pattern is the best! The pattern is a free download and works fine, however there were a few glitches in putting it together. Read to find out how to navigate them! 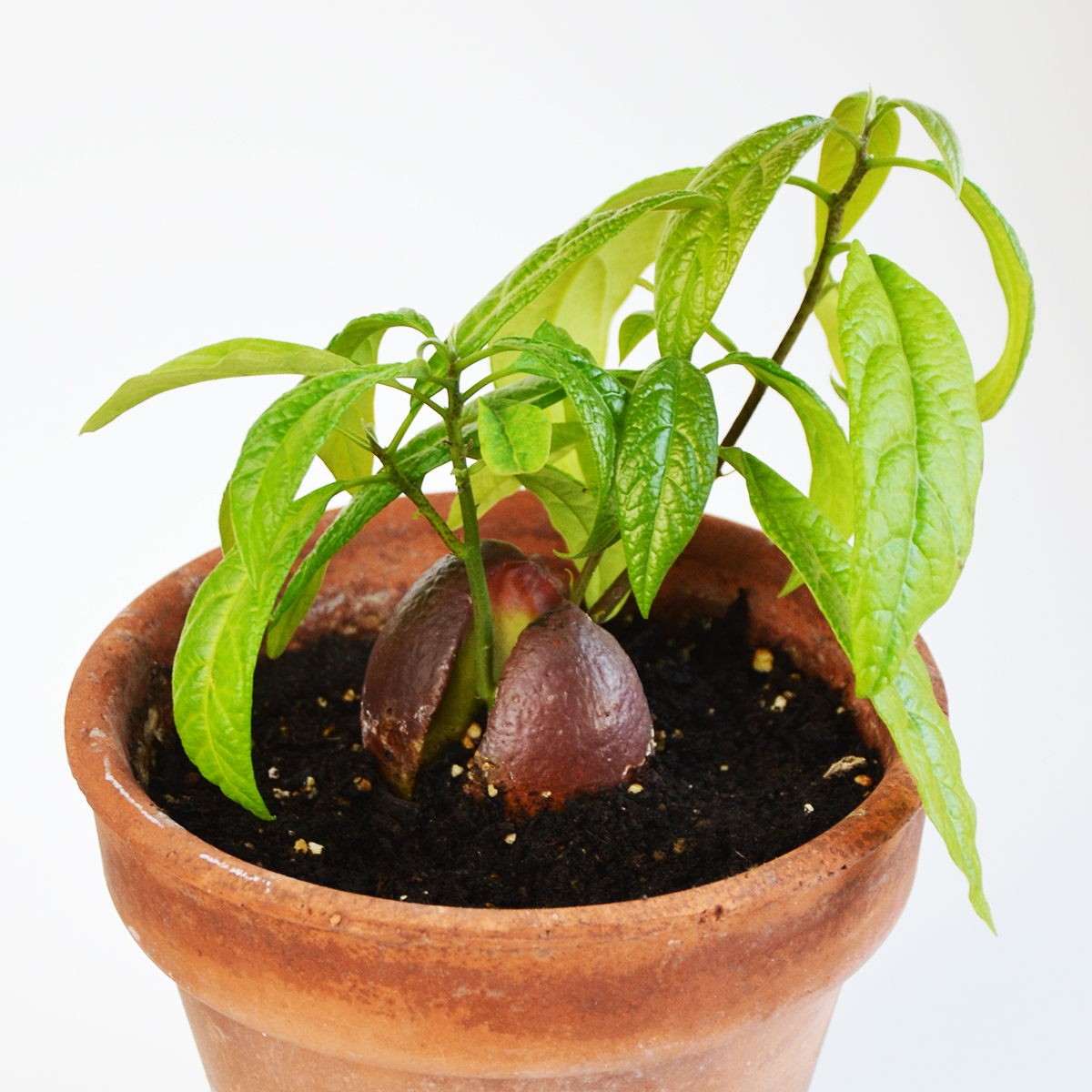 How to grow an avocado plant from a pit

Raise your hand if you've ever tried to grow an avocado plant from a pit. But, did it actually grow? I never managed to grow a plant from the pit until I read this post and followed its advice. And after sharing this post with my readers, dozens have reported to me that they, too, were finally able to, too! 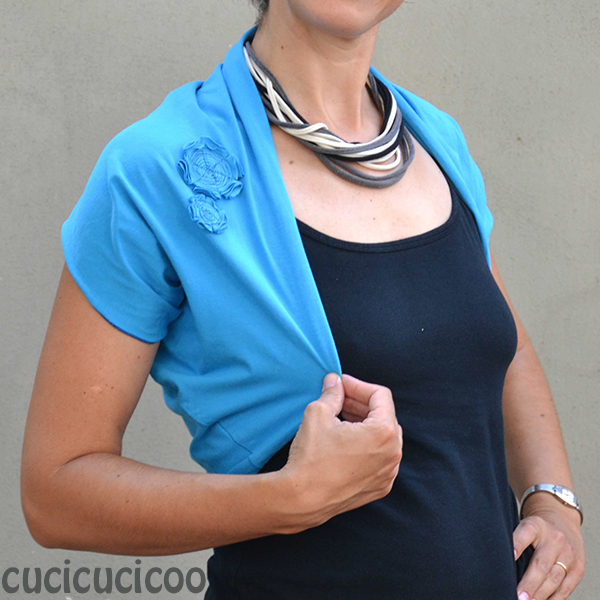 This shrug free pattern was described as being very easy to sew. And it was! I sewed this years ago and continue to use it frequently. I also added some cool folded circle flowers that I found elsewhere online. 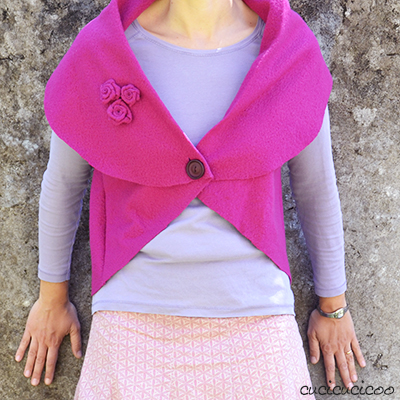 Yet another supposedly simple one-piece-of-fabric-with-two-slits project. I don't know if I messed up the positioning or it just wasn't good for my body shape. After years of it sitting in my closet, I cut it up to reuse the fabric. 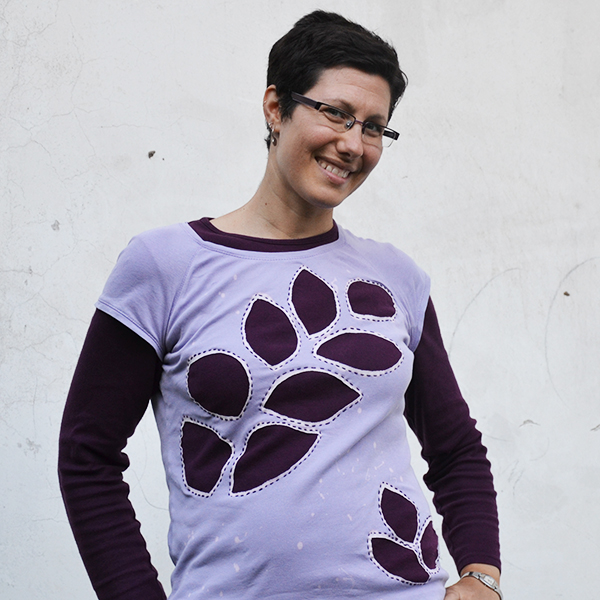 I looked at this pin over and over again before trying it. And it turned out just how I wanted, as well as letting me salvage a shirt with stains on it! It continues to be one of my favorite fall shirts! 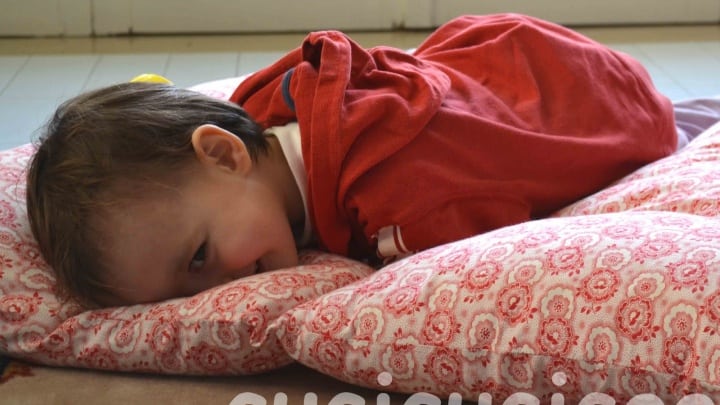 This is another project that you can find in about a gazillion pins on Pinterest. And you know why? Because it's easy and so. Much. Fun. Years later, we use this pillow bed every day, as do many of the people that I made these for. 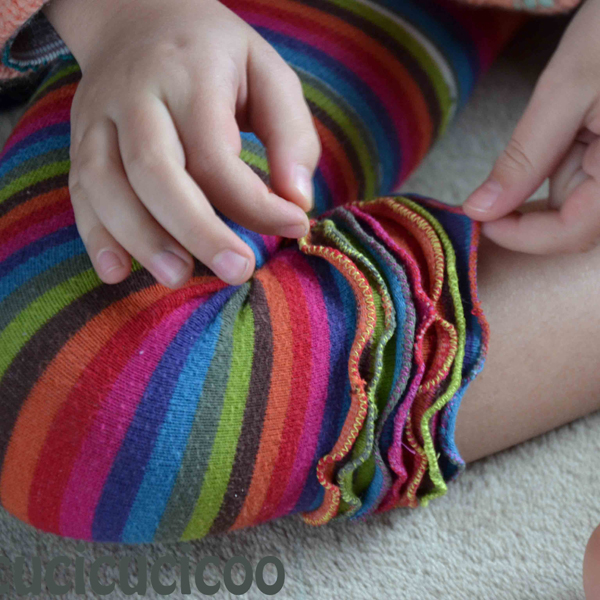 I have a soft spot in my heart for colorful leggings, as does my daughter. When she outgrew some favorite thick tights, I used this tutorial to turn them into leggings with ruffles. And how she loved wearing them! 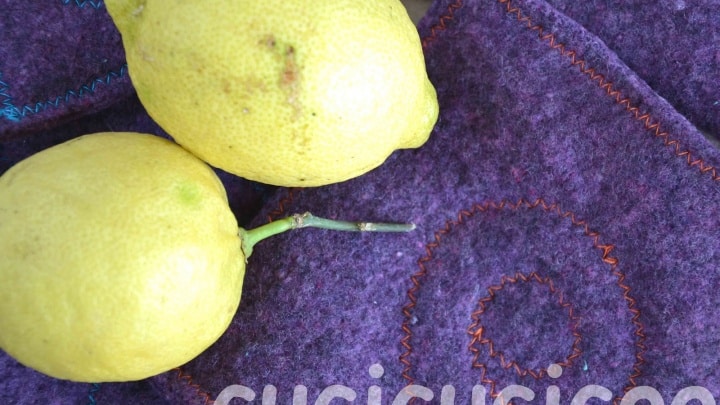 This was an Italian project and spoke to me as a) I love anything reusable that replaces disposables, and b) I'm obsessed with using felted wool sweaters. I made a bunch of these sponges and they do work well up to a point, but do not absorb. My verdict? Use them along with other, more absorbent, washable sponges. 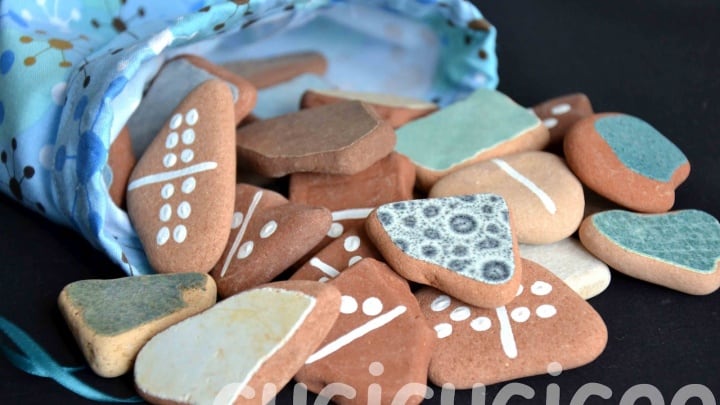 I think that making dominos out of rocks was one of the very first Pins that I fell in love with. I put my own southern Italian spin on it and made beach-washed tile dominos. I gave away quite a few of these sets, and they were always a hit! 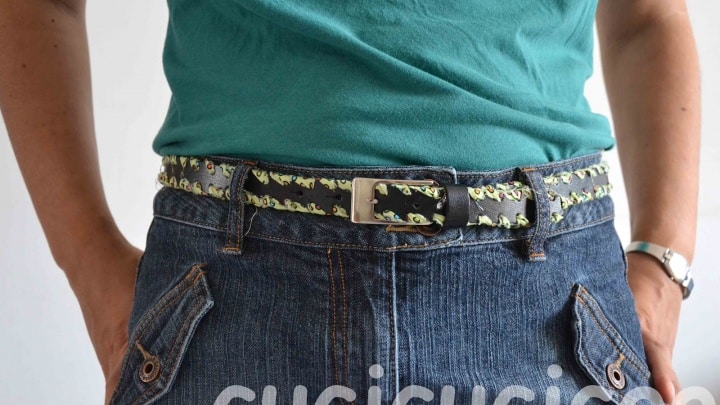 How pretty is this belt! Holes are punched around the edges and fabric woven through. I would've worn this belt for years except that the belt itself was crap quality and smudged gunk onto my clothes. Ew! Someday I will repeat this project. 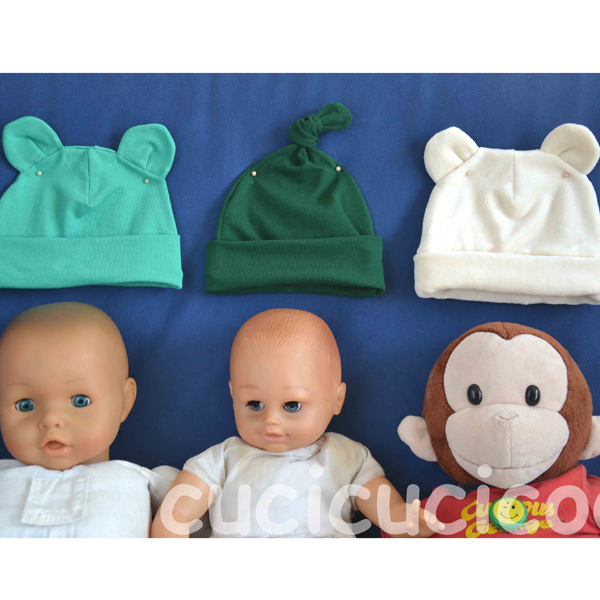 A friend asked me to make a gift for her friend's new baby. I found this free pattern and tutorial for cute newborn hats, and they were so easy to sew and absolutely adorble! 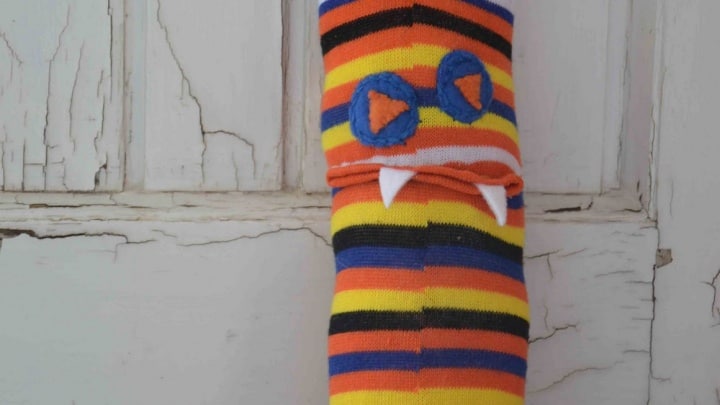 If you've got loads of extra socks hanging around, or perhaps socks missing their pair, then these sock monster toys are perfect! I added my own homemade rattler inside to make the perfect baby toy! 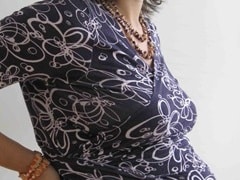 I found this free pattern for a wrap around maternity top when I was pregnant with my son. Unfortunately it isn't free anymore, but you can purchase it. This was great, though I would suggest using a solid-colored fabric because, no matter how perfectly you wrap it around you, the wrong side of the fabric will still show in some spots. 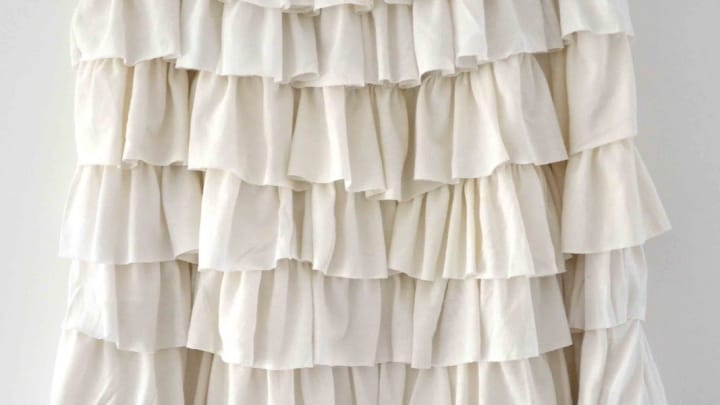 Four big white T-shirts because this pretty ruffly petticoat that I loved wearing layered under other skirts. 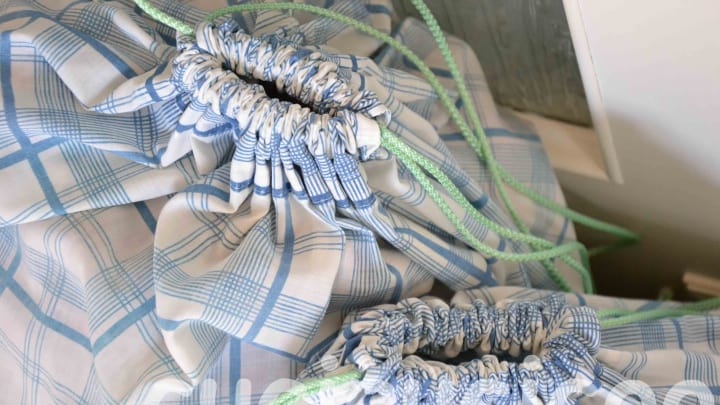 This project for making laundry bags from pillowcases is really easy and helps you keep laundry sorted. I am still using these same laundry bags to this day! I've had to change the cord and repair the casings which ripped a bit, but they've been a lifesaver! 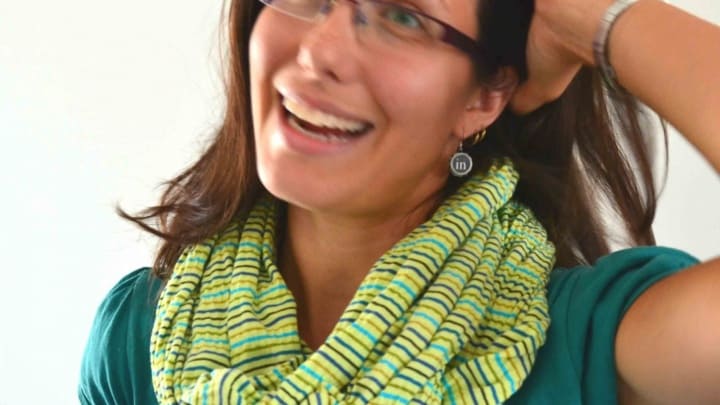 I found this project long before my obsession with infinity scarves began. Yeah, it works, but I never wore it wrapped around my shoulders or any of the other ways mentioned, and eventually I just put it back into my fabric stash to use for something else. 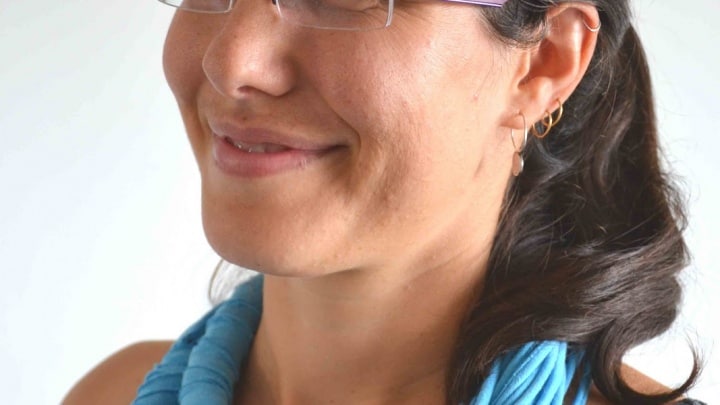 These projects have now become very commonplace, but at the time I didn't see as many T-shirt necklaces around. But that doesn't mean I don't love them! In addition to this classic t-shirt strip necklace, there were some other projects that didn't turn out quite so well. 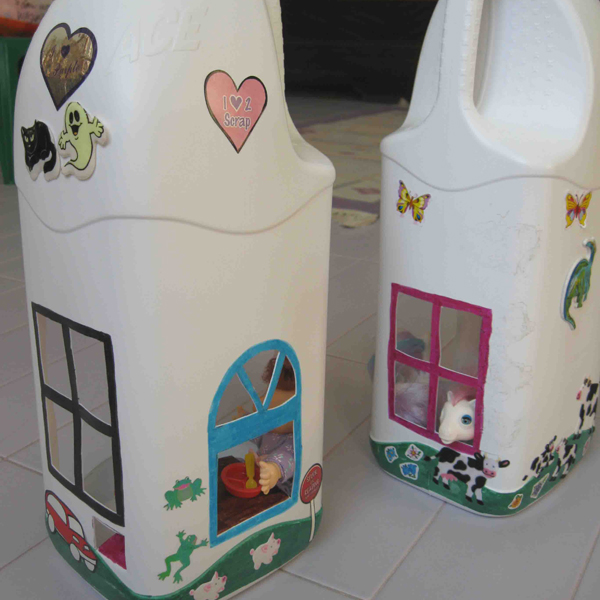 This idea is soooo much fun and my kids used these little bottle houses for quite a long time. And when they didn't use them anymore, I just threw them in with the recycling! 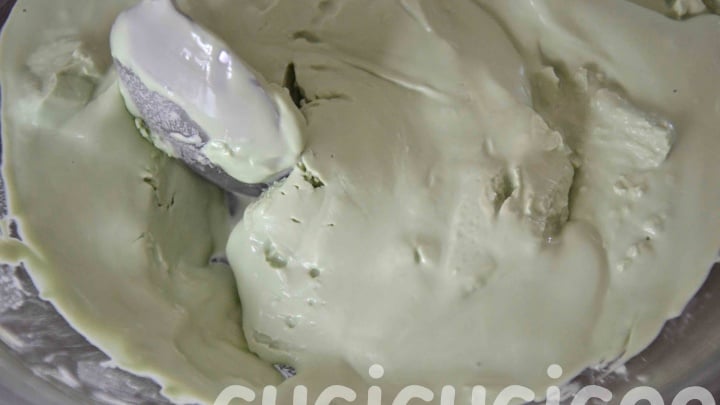 One summer I went through Pinterest looking for fun projects and activities to do with my kids. Oobleck was absolutely fascinating to make! 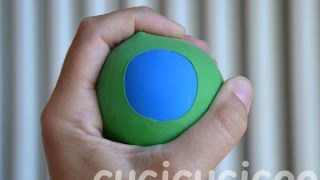 That same summer I wanted to try making flour-filled balloon stress balls. Except it was total disaster and I got flour all over my dining room. A trick I found on Pinterest totally saved this project! There was also a great project for making rice balls with two colors. 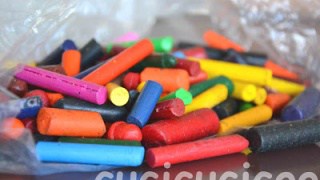 "new" crayons from old ones

Who has not seen some variation on this project? Take old crayon bits and melt them down to make new crayons! Sounds great, right? And it is... as long as you have decent quality crayons to begin with. If your crayons are those crappy high-wax content ones, the wax will separate and float to the top, and you'll just have to throw them away anyway. 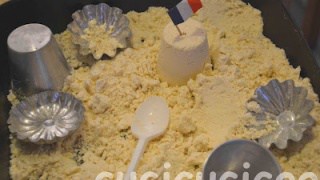 Here we have two kid activity projects. DIY moonsand was a HUGE success. And, if you can believe it, we have the same batch that we made about 7 years ago and it still works fine! The bubble bath paint was also lots of fun. 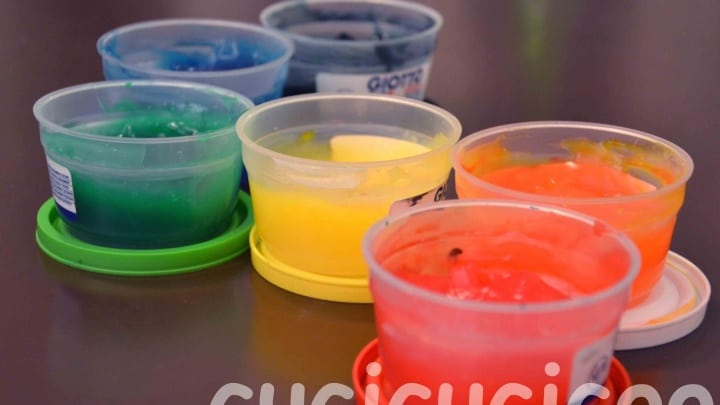 Ok, this homemade finger paint did work. But the consistency was pretty gross and did not really color that much. We didn't bother with this project again. 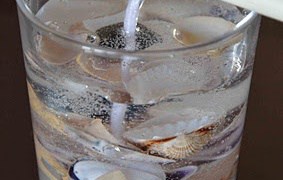 One year my daughter and I made this homemade shell candles with shells that she'd collected on the beach and pour-out candle wax. They are quite cute and the people she gave them to enjoyed them. None of us ever actually lit them though!