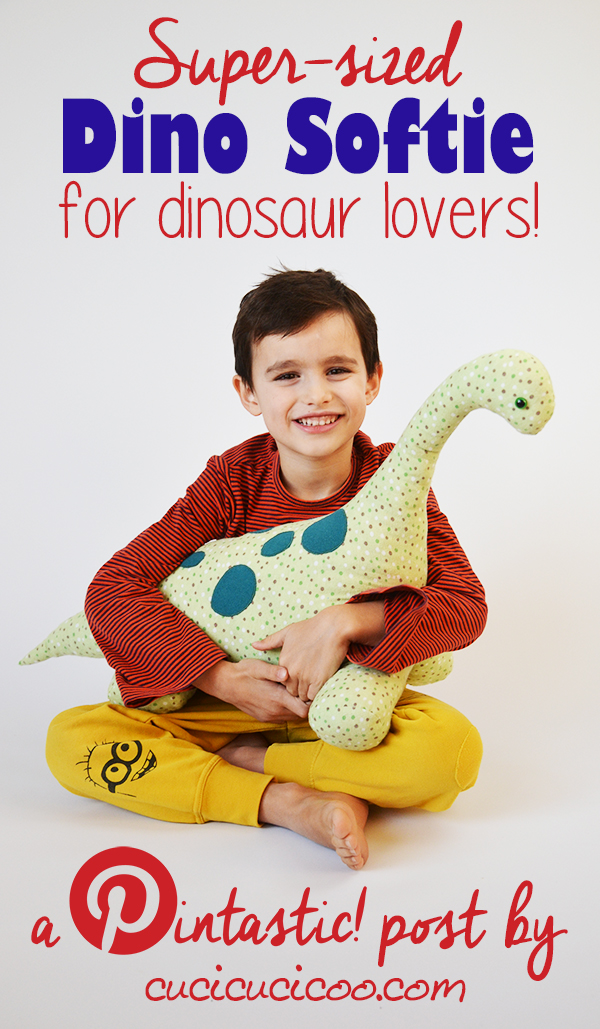 Last week I unveiled my latest project, “Pintastic!” In this series I test out cool-looking tutorials found on Pinterest and give a Pass or Fail verdict.

The first project that I just had to try out was this fantastic, yet simple, huge dinosaur softie pattern by We Lived Happily Ever After, which I saved on Pinterest here.

My kids are totally in love with all things dinosaur-related, and I knew that my little boy would love getting this big guy on his birthday last month. 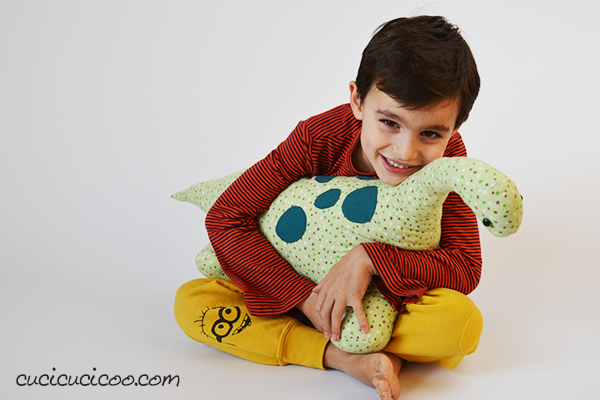 And so it was! Now let me tell you about this free stuffed dinosaur pattern and tutorial, and then I’ll give you my verdict! 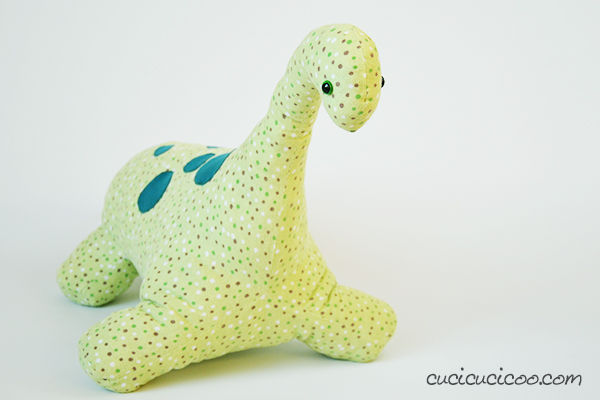 I could tell from the photos in the tutorial that this guy was absolutely gargantuan, so I printed the pattern pages sized at only 75%, but you can see that it still came out pretty huge. Beware that it takes a LOT of stuffing to fill him, which is the main reason why I made mine smaller.

The one issue I had with the pattern was that it wasn’t marked exactly where to attach the leg pieces to the body and belly pieces. This was a bit of a problem because the legs are cut out in the same piece of fabric as the body and belly, so they need to be in the right position to line up after they’re cut out. I had to fiddle around a bit and put the pattern pieces on top of each other various times to try to figure out where the legs should attach. This was harder than it sounds also because there is no specific point indicated for where the belly should attach to the body under the neck. But eventually I figured it out and the pieces fit together.

I would also suggest leaving the turning space between two of the legs, not at the tail, to be able to leave a wider opening and to stuff the dino better. It was not easy to push stuffing all the way up inside this guy’s noggin from all the way over at his tail! I ended up not stuffing the neck enough and after a couple of days it started… wilting. So I had to cut open the poor guy’s neck with my awesomely sharp new seam ripper* and stuff it more to keep it firmer. 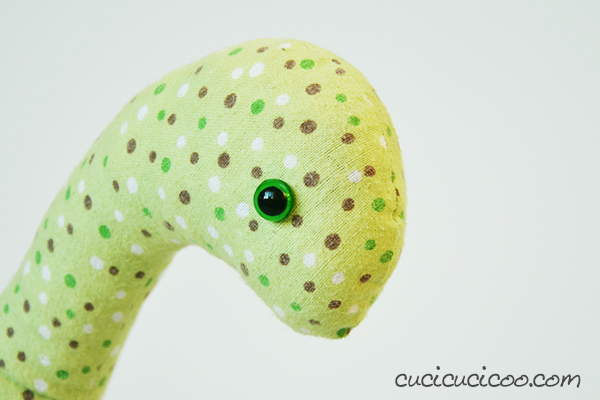 Hannah made her dinosaur from upholstry fabric, but I decided to use up some of my massive collection of cotton flannel. I made random-shaped spots from the soft turquoise fabric left over from my daughter’s Lucy Wilde coat. The tutorial says to glue the spots and eyes on at the end, but I preferred a more durable method and so I appliqued the spots on (here’s how to appliqué) before sewing the belly to the body and used these plastic safety eyes*.

How sweet is that little face?! 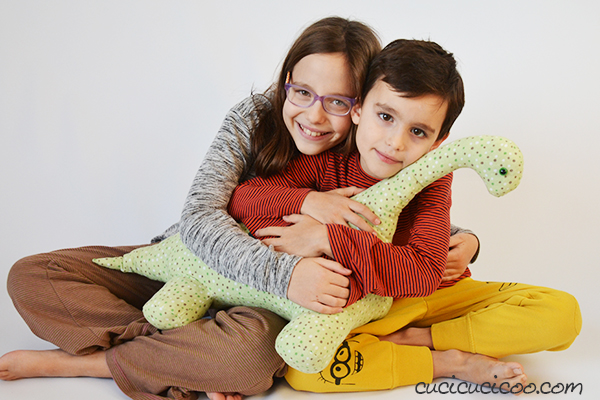 Even my older gal was absolutely smitten with this squeezable Brontosaurus! 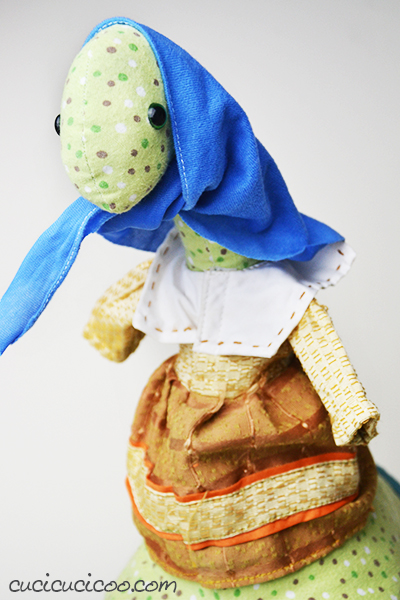 It’s a good thing I stuffed him more afterwards, because on Christmas the kids and their cousin decided to dress up the dinosaur’s neck. I nearly peed my pants laughing when I saw this!

In the end, this tutorial got a big fat “Loved it“. While it’s true that the lack of pattern markings made it slightly harder to assemble, you need to remember that this is a free pattern. While I expect a paid sewing pattern to have a whole series of features, including clear markings, a free one doesn’t have to be quite so detailed.

This pattern is really very simple to sew and decorate, and you could really go all out in embellishing this little guy if you wanted. My kids love it and I had fun making it. So two thumbs up from me! 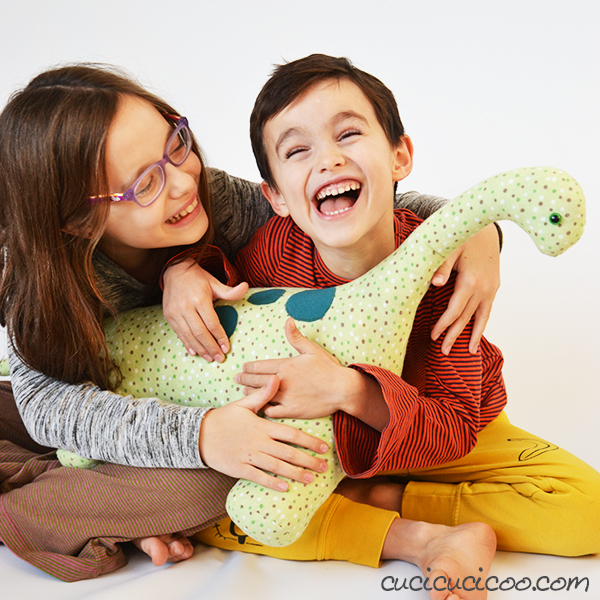 Seriously, I wish that all sewing projects could be this much fun! Thanks for the free stuffed dinosaur pattern, Hannah!

Don’t forget to bookmark the Pintastic! home page to keep updated on all the Pinterest tutorial reviews!