Home » Crafting (all) » Knit / Crochet » Lessons from a hat: 5 reasons why making mistakes is ok

Imagine this: you’re poking around Pinterest, Ravely or an online forum somewhere and you find a DIY project that you fall in love with immediately. You procure the materials and get to work. Except at some point you realize that something somewhere along the way has gone horribly wrong because your creation looks nothing like the perfect work of art in the pictures you’d seen.

You probably don’t need to stretch your imagination too much to imagine this situation, because it happens pretty often with creative work. We’ve all seen those Pinterest “Nailed It” pictures, like this one (a Pinterest fail that I’ve committed myself), and chances are it’s happened to you at least once, too.

Sure, it’s frustrating to spent lots of time, energy and money on something that comes out awful. But, as our mothers always told us when we were little, there’s always something to learn from our mistakes. In the case of DIYing, it’s generally of a technical nature, in the sense that you get a better understanding of how to do a specific technique so that next time it’ll come out better. In this sort of situation, it’s understandable how making mistakes is ok. But what about when you cannot for the life of you figure out why the mistake happened? What is there to learn then? 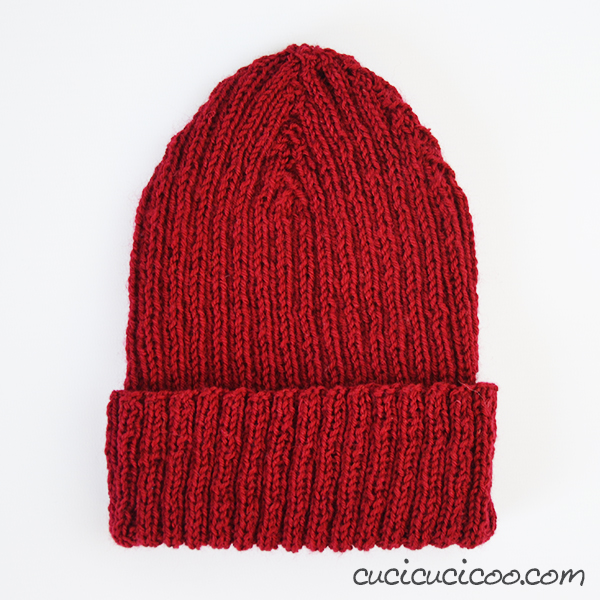 Which brings me to a recent project of mine, the knit ribbed hat Exeter. At first glance, the hat and the accompanying scarf I knit look just fine. At second glance, especially after seeing what the hat should’ve looked like, they definitely look wrong. But the worst part of it was that I couldn’t understand why it came out wrong. But after a little thought, I realized that there are many reasons why making mistakes is ok. 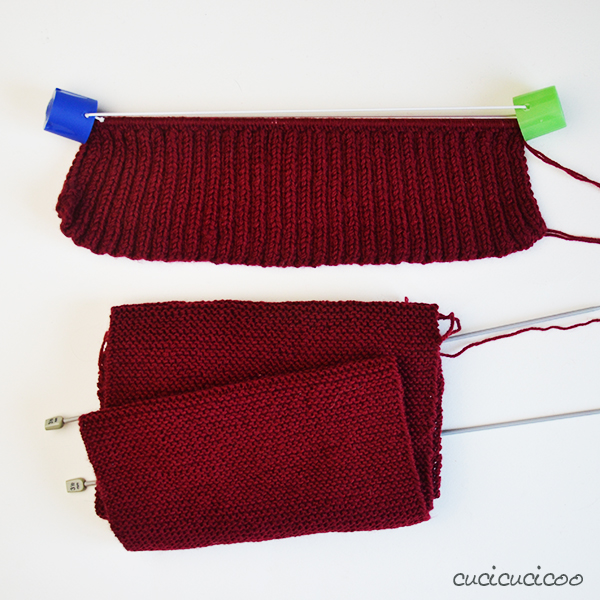 But first, let me tell you the long story behind this project. About 11 or 12 years ago, I decided to knit my husband a matching scarf and hat. I started making a very simple garter stitch scarf in a lovely burgundy virgin wool yarn. I wasn’t sure how much yarn I’d need to make the hat, so I put the scarf on hold to avoid using too much of what I’d bought. The only problem was, I had no idea how to knit a hat.

I asked a woman at the yarn shop, and she quickly gave me instructions which I didn’t understand at all. Then I got pregnant with my first child and the project got stuffed away in a bag somewhere because I had other things to think about.

Years later, I started knitting again and found a knitting group in Naples, near where I live. The ladies in the group helped me plan out a ribbed hat based on one my husband had and I started working on it. But then life got in the way and I wasn’t able to continue going to the group and I had no idea how to continue the project. I only got as far as you can see in the picture above. (I made those knitting needle protectors from two glue stick caps.) The project got shelved once again. 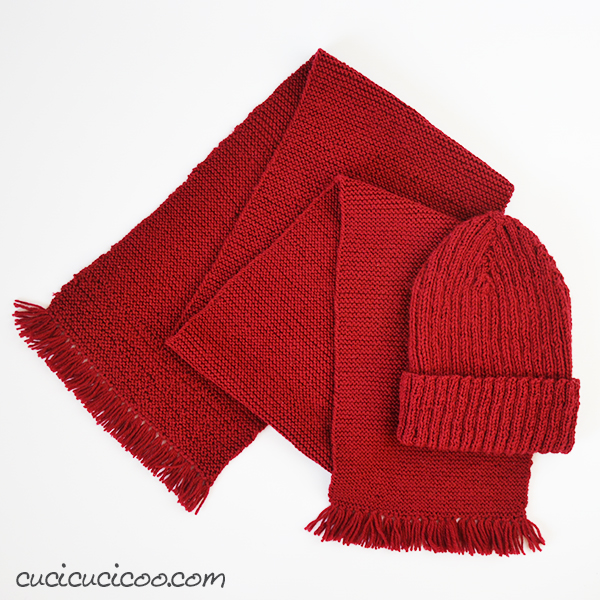 I continued to learn more knitting techniques and started branching out into non-rectangular shapes and using circular needles. Last December, exactly one year ago, I decided to unravel the hat and start anew with the Exeter pattern. I knit gauge swatch after gauge swatch and had issues figuring out the right gauge for the yarn. Frustrated, I stuffed the project in a bag AGAIN, and tried to forget about it.

This past summer we spent an entire month cleaning out our home, getting rid of things, and finishing up old projects. I wanted to finally finish this project for nothing other than the principle of finishing it. Again, I knit gauge swatch after gauge swatch and started the Exeter pattern about four times with different gauges and number of stitches before coming to the conclusion that I just needed to follow the pattern exactly as it was written. It looked great until I got to the crown decreases and things started looking all wrong. 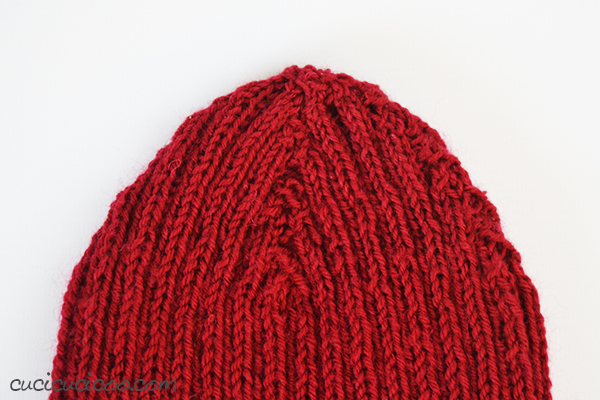 I still have no idea what I did wrong and plan to ask the designer if he can tell from the pictures. The decreases were supposed to merge smoothly to create straight lines joining at the top. My stitches just look like a tangled mess. I tried to figure it out, but then just wanted to get the project over with because I couldn’t stand it anymore, so I just continued until it was done. 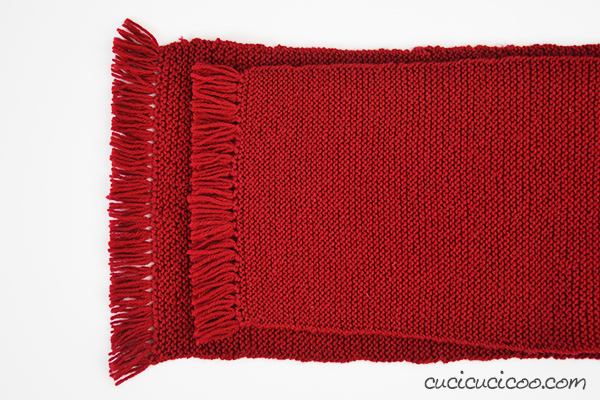 I then finished off the scarf only to realize that I’d apparently made quite a few increases along the way when I’d knitted it years ago, because the two ends were totally different widths. Sigh. Luckily you can’t see these mistakes too much when the scarf and hat are worn. 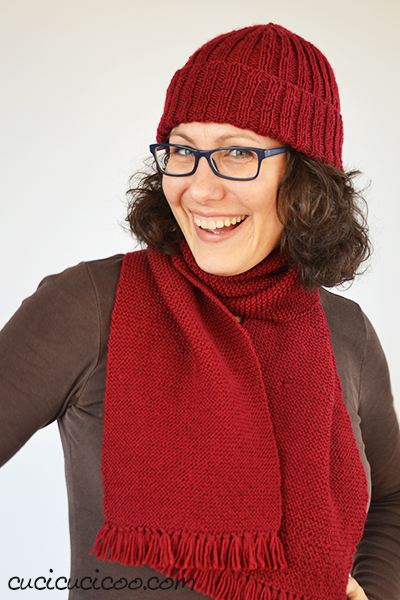 This never-ending project didn’t come out as I’d envisioned, but I’m still happy because I learned quite a few things from it.

When I started this project 12 years ago, I knew how to knit and purl to create rectangles, and nothing more. While I’m by no means an exceptionally good knitter now, I’ve learned so much since then.

2. It’s about the journey, not the destination.

I was so sick of this project. I abandoned it many times because I didn’t know how to continue, but I delayed picking it back up again because it just wasn’t pleasurable. But knitting should be pleasurable. It would be so much easier to just go to a store and buy a hat and scarf, but that defeats the purpose.

I often have trouble with this. I want things to be perfect, and usually that’s just not possible. So why stress out over it? Does it really matter? Will anyone else even notice the imperfections? Probably not, so relax and have fun!

It felt so good to give this set to my husband on Christmas. In part because I’d finally finished it, but also because it’s a wonderful feeling to share something you spent so much time on with someone you love.

When I was a full-time EFL teacher, my boss told my colleagues and me that it’s a good idea for language teachers to take up a new language every so often just to remember what it’s like to be on the other side of the teacher’s desk. I took her advice at the time and started taking a German course and I was shocked to feel what it’s like to be the student learning. It taught me a lot about what type of teacher I wanted to be.

Now I teach sewing to my blog readers, many of whom are beginners with little experience. I generally do a pretty good job explaining all the details with those readers in mind, but sometimes I forget what it’s like to be sitting in front of a sewing machine without any clue as to how to even thread it. It can be really daunting.

This experience knitting my husband’s hat reminded me how it feels for a beginner to tackle a project that she isn’t quite ready for, and how much guidance it takes. So I will keep this in mind as I create my future tutorials and lessons. 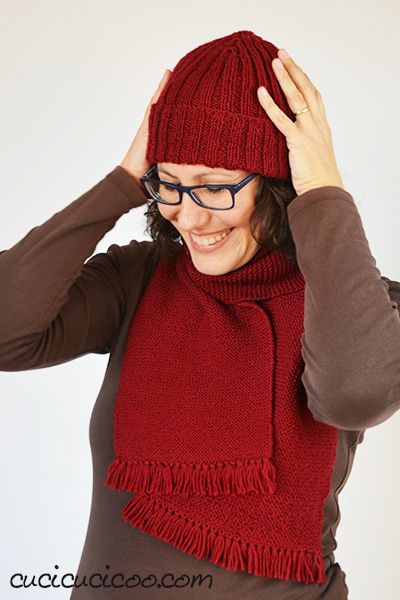 So, in the end, even if the hat and scarf set came out pretty far from perfect, I’d say that they were a success anyway because they reminded me why making mistakes is ok!

You can read the technical details about this hat and get the free pattern here on Ravelry.