Today I’m so happy to back with my Cucicucicoo’s Eco Crafters and Sewing series with the one and only Allison from Sweater Doll! Allison is a US expat, like me, living in Australia and creates the best fabric dolls and softies ever. Seriously, next time you’re considering buying a Barbie or other doll, check out Allison’s patterns for fashion dolls. They are simple, customizable dolls with all sorts of clothing items to sew for them. So cool!

I also love Allison’s philosophy on environmental friendliness and using non-toxic materials. She is a big fan of upcycling fabrics and has written about the dangers of using polyfill stuffing in softies and other stuffed sewn items. Her article on natural fiberfills really made an impression on me, and I am now vetoing all sythetic fills in my work and sourcing local wool stuffing instead. 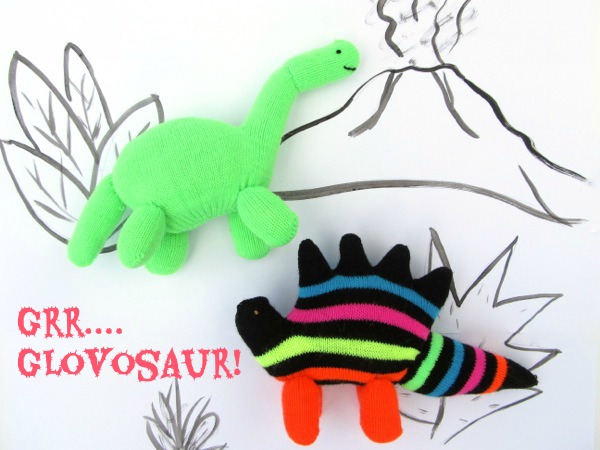 I asked Allison months ago to contribute a tutorial for this series, and she came up with this amazing project repurposing gloves. My kids nearly went bezerk when they saw the pictures! Alas, it was mid-July and I was sweltering. (Remember, July is full-on winter in Australia and full-on summer in Italy!) Here I was publishing posts on how to stay cool in the summer, and the mere idea of gloves made me suffer.

So Allison waited patiently for me to get my act together and stop feeling so hot, until I finally felt ready to publish her tutorial. In the end, the timing is probably better this way, because in these in-between seasons in either hemisphere, people are either putting gloves into storage or taking them out from storage. And so, without further ado, here’s Allison with her “Jumping with Jurassic Joy!” upcycled glovosaur tutorial!

When visiting family and friends, I quickly resort to my worst guest behavior: going through the rag bag – that treasure house of cast off, lost bits, and old clothing. Because, who doesn’t bring a sewing kit when they visit other people?

My latest foray into another person’s trash/treasure – Eureka! Gloves! I once made a little mouse from a lone glove. I saw the instructions on Pinterest. I had never thought to use a glove to make a little animal. There were gloves meant for girls and there are only boys in this house. Dinosaurs are always a hit with kids. Doesn’t every kid dream of being an archeologist at least once?

There was also a pair of striped fingerless gloves. Eek! Right away I’m thinking: stegosaurus! He was my favorite dinosaur when I was little. Of course, he’s going to need another vegetarian friend to roam the backyard with, so I made an apatosaurus also.

Each glov-o-saur requires two gloves or cannibalized bits of several gloves. I tried to make each from one glove, but it wasn’t quite right. I have hand sewn these little dinos. Some of the parts can be machine sewn, if desired, but the dolls will need some hand finishing, such as attaching the legs.

** If you are not confident that your hand sewn stitches are small enough, just sew a second line of stitches to add strength to the seam.

** Toys with buttons and beads can be choking hazards for children 3 years and under. Please use thread embellishments if small children will be playing with these toys. Ribbons can also be a choking hazard. If using a ribbon bow, make sure to stitch the ribbon on the toy securely. 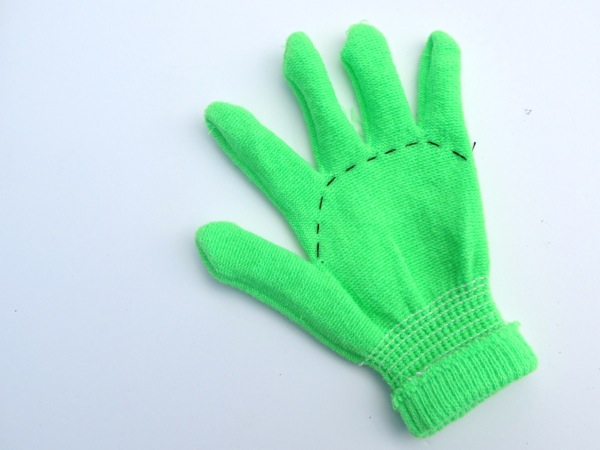 1) Turn one glove inside out and sew a curve of small stitches across the base of the fingers and cut the fingers off about 5mm above stitching. Turn right side out. 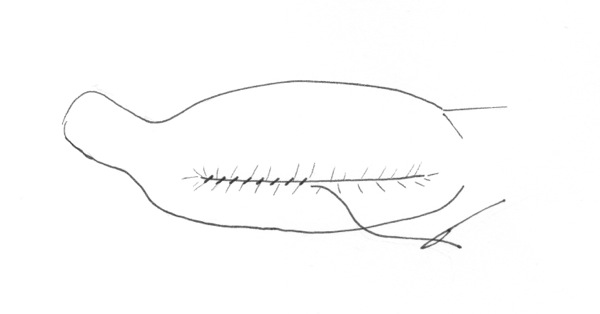 2) Stuff this hand and thumb and stuff the cuff inside of the glove. Stitch across the bottom using a ladder or whipstitch.

3) Use the longest cut-off fingers for the head and the tail. Stuff each one. For the tail, turn the raw edges inward and simply stitch the tail to the back end of the dinosaur. Stitch in a circle around the base of the tail attaching it to the back of the dinosaur. The stitching may gather a little and that’s fine. 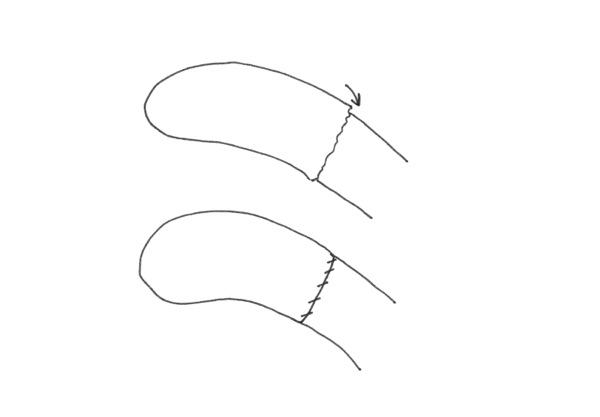 4) The head is stuffed not quite to the very end and stretched over the neck like a sock over a leg. Angle the head slightly to make a nice curve of the neck and head and pin in place. Turn the raw edges under and stitch around using a ladder stitch, connecting the head to the neck. Try not to pull the stitching so tightly that it starts to pucker around the neck. 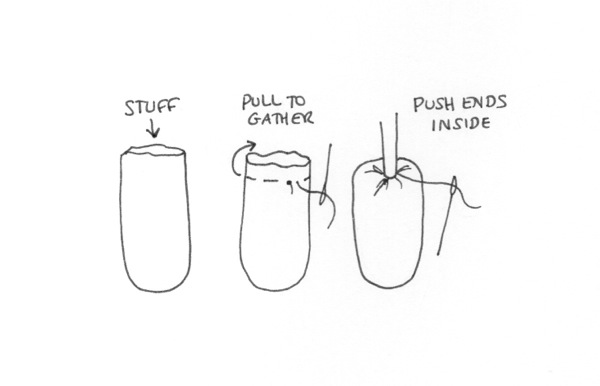 5) Using a matching or contrasting glove, cut the four fingers off. Stuff them, sew a large running stitch around the opening to gather, and pull tight. Using a chopstick or your finger, poke the raw edges inside the leg so all you see is the puckered gather. 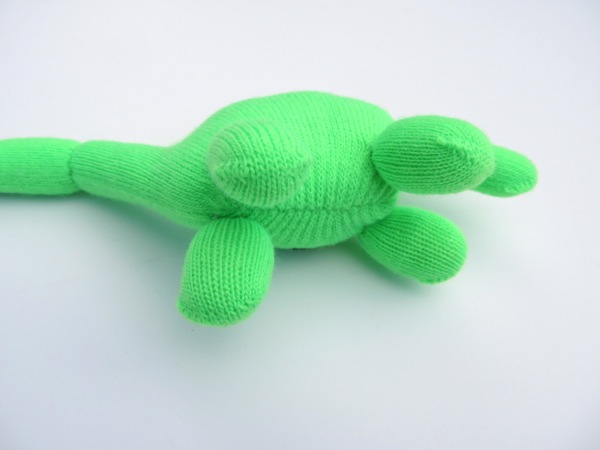 6) Stitch each in its proper place slightly to the side of the center belly seam. If the legs are stuffed well and the stitching secure, the dinosaur will be able to stand up well and not sink. 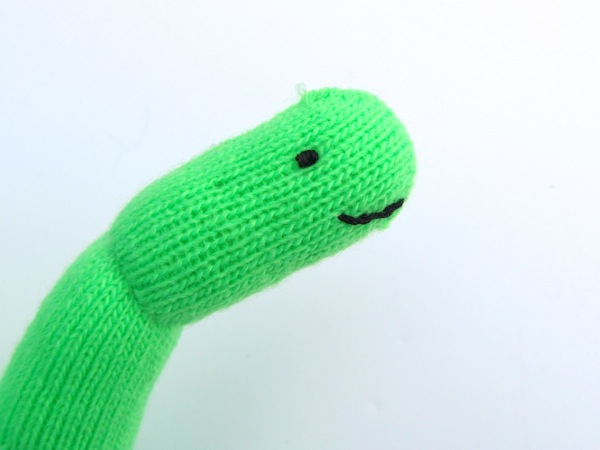 7) Add eyes by making a couple of french knots using embroidery thread, or sew on small buttons or beads.

8) If the neck seam appears to prominent to you, tie a ribbon around the dinosaur’s neck or embroider a fancy stitch around the seam to lessen its appearance. 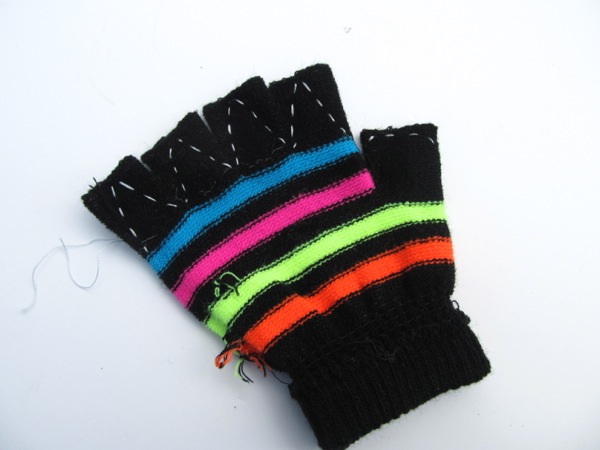 1) Turn the glove inside out. Sew scales only a third to halfway up the finger. If you use fingerless gloves, sew each stubby finger so that you make a point for each back scale. The threads here simply show you the area involved; your actual stitches will need to be smaller. Trim the corner bits off carefully so you don’t cut through the stitching.

2) Cut the tip of the thumb off to make the head shorter. Stitch across the opening. If you use a fingerless glove, just stitch the opening shut. Turn this glove right side out and carefully push out the back scales and head.

3) Stuff the head, scales, and body of the dinosaur. Turn the cuff to the inside of the glove and shaping a nice belly, pin in place. Stitch across the belly using a ladder or whipstitch. 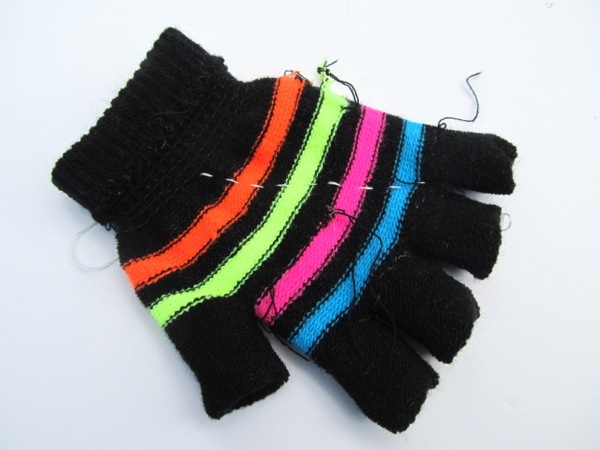 4) For the tail, use a matching or complimentary glove. Stitch from between the third and pinky finger across the palm to a point at the bottom of the palm directly below the center of the second finger. The stitching here illustrates the area. Your stitches will need to be smaller.

5) Trim away excess fabric about 5mm from stitching, and cut off the cuff. Turn this cone-shape right side out. Stuff the tail. 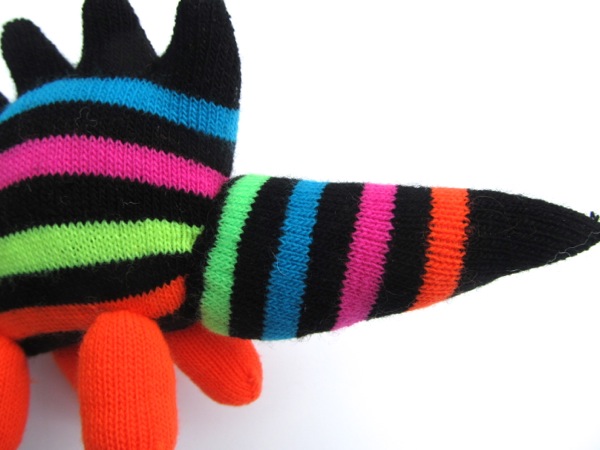 6) Turn the open raw edges to the inside of the tail and pin to the back of the body. Stitch in place securely but don’t pull the tread so tightly that you gather the tail too much.

7) If you used a glove, you can use the fingers for the legs. If you used fingerless gloves, you will need to cut 4 fingers off another glove for the legs. Stuff them, sew a large running stitch around the opening to gather, and pull tight. Using a chopstick or your finger, poke the raw edges inside the leg so all you see is the puckered gather.

8) Stitch each in its proper place slightly to the side of the center belly seam. If the legs are stuffed well and the stitching secure, the dinosaur will be able to stand up well and not sink.

9) Add eyes by making a couple of french knots using embroidery thread, or sew on small buttons or beads.

Here’s a guide to two stitches I use a lot in my hand sewn creatures. 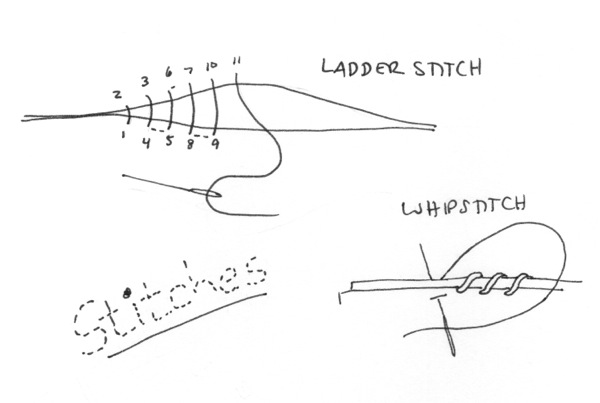 I’m hooked! I can barely keep myself from assaulting the neighbors. Visions of gloves lost under beds and in the backs of closets are taking over my brain. I’m already trying to figure out a T Rex and a pterodactyl made from gloves. (Update: here they are!)

What I love most about these is that (besides being lovingly handmade) they are not made of plastic, they are 3D softies and not flat, and they are just right for little hands to play with. 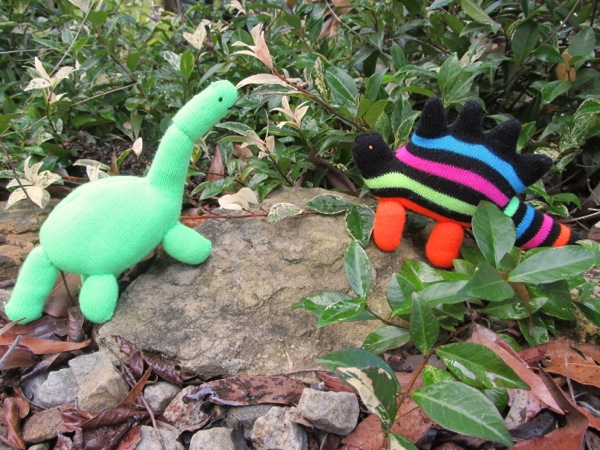 My toy stuffing diatribe: When you work for U.S. government agencies, you find out a lot of stuff you almost wish you never knew. Polyester (plastic) fiberfill is a petroleum waste product that is listed in the US Toxic Substances Control Act because of its toxicity when it comes into contact with digestive and respiratory tissue (esophagus, lungs, stomach, intestines).

The documentation states even a few fibers is considered toxic and potentially carcinogenic. If you’ve ever seen a chewed up pet bed, or seen a split seam on a teddy bear, you know how easy it is for children and animals to ingest and inhale these plastic fibers. This is why I never use polyester fiberfill, even in my test products when I design a new toy sewing pattern.

So what else is there? Plastics are the alternatives to traditional toy stuffing: cotton, wool, kapok, and fabric scraps. These days there are other fibers being used to make luscious and washable toy stuffing, such as eucalyptus (tercel) and corn. Non-GMO corn stuffing is the most like polyester fiberfill. It is bouncy, fills well and fully, and is completely machine washable.

My favorite stuffing is wool fleece. It is also bouncy and filling, and it naturally warms up when placed next to the body or in the hands which makes it a very comforting materials for children’s toys. A wool stuffed toy can be washed by hand.

Seriously, aren’t those dinosaurs the best?! I love them, and now that I’ll soon be breaking out our winter gloves, I’ll be looking for some candidates to make some of these! My kids are dino-crazy, and so they’re always thrilled about more dinosaur toys, softies, stickers, figurines or anything else they can get their hands on!

Are your kids dinosaur fanatics, too? Well then, you need to check out two of Allison’s softie patterns: this set of three dinosaur plush toys and this set of four Glovosaurs! Yes! Because it took me such a long time to publish this tutorial, Allison had ample time to design two more upcycled glove animals in dinosaur form. That Pteradactyl is just killing me! Thank you so much for this glove animal tutorial, Allison!

Here’s more about this talented lady: 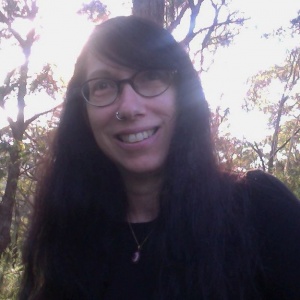 A thrift store stalker and tinker of textiles, Allison Dey Malacaria grew up sewing from the rag bag in the kitchens of Southern and farm women in the 1960s in the U.S. Four years ago, she met Mr. True Love and moved to Australia where she is living happily ever after teaching fibre arts crafts and designing sewing and stitchery patterns.

This tutorial on how to sew an upcycled glove dinosaur is part of the “Cucicucicoo’s Eco Crafters and Sewers” series! Want to see how other sewing and crafting experts upcycle materials? Then check out the other tutorials in the series!