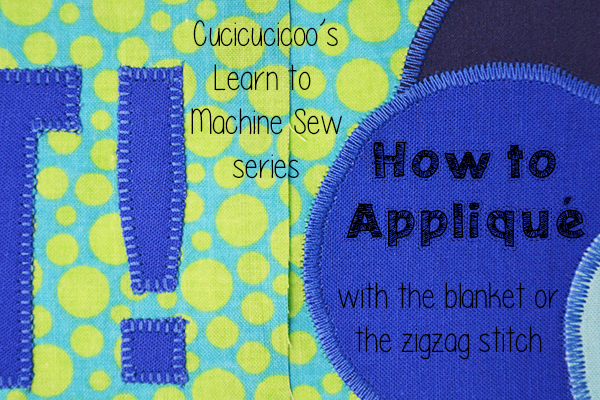 Today, as part of the Learn to Machine Sew series, I’m going to finally show you all how to do one of my very favorite sewing techniques: appliqué! This is so fun and easy to do, you will soon be embellishing everything you can get your hands on!

There is a LOT to learn about appliqué, but I’ll just get into the basics here, with just the two most common stitches and how to appliqué both symmetrical and non-symmetrical shapes with a sewing machine, not by hand. However, if you want to learn more, The Crafty Quilter has an excellent three-part series on appliqué that I highly recommend. Let’s get started! 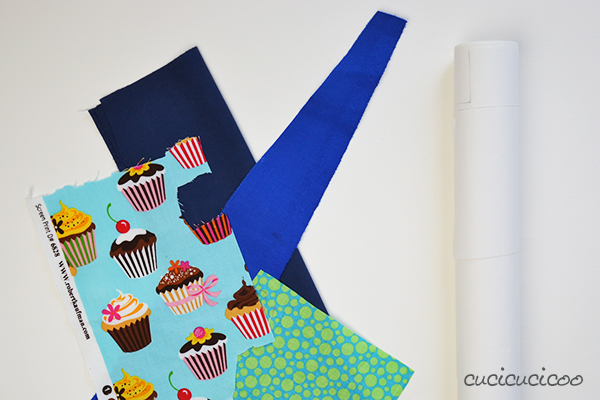 You will need some woven fabric scraps and a larger woven fabric base and some sort of heat-fusible web adhesive. I have used various types of fusible web for appliqué, but my favorite is definitely Heat’n Bond Lite

* and, after a few random disasters with other brands, I now use ONLY that type. (You can do applique with non-woven fabrics, such as knit, but there are a few things you need to be careful about, so we’ll talk about that another day. [edit: read about appliqué on knit here!])

I decided to use this practice piece to make a potholder with this tutorial, so I cut out two base pieces with that square potholder pattern. You could also make a pillow with your practice pieces. 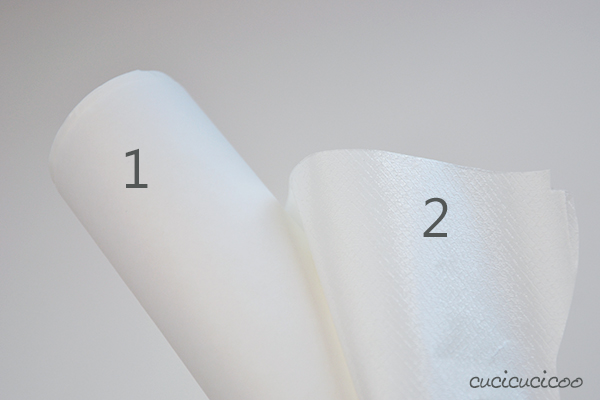 This type of fusible web has a paper side (1) and a slightly sticky side (2). Make sure you always follow the manufacturer’s instructions for your particular product, even though the process will be pretty much the same no matter what type you use.

Now, let me take you through a few different ways to prepare your appliqué. 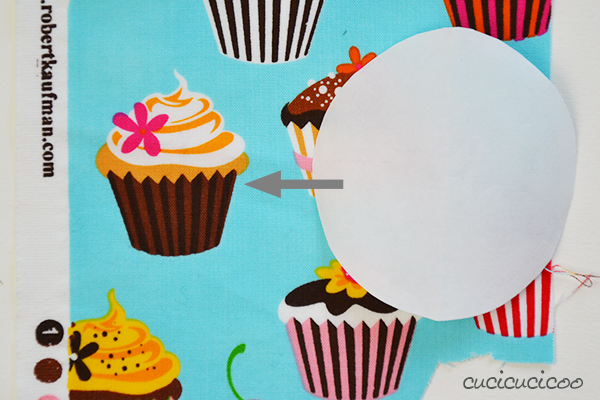 In the first situation, you want to use a printed element from a patterned fabric, in this case a cupcake. Cut out a piece of Heat’n Bond (or other fusible web) that is bigger than the printed element. 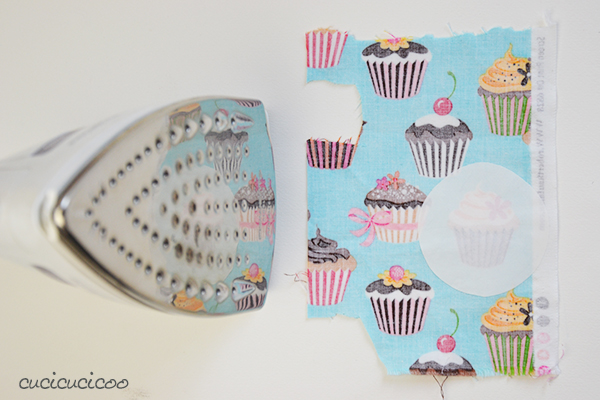 Flip the fabric over, wrong side up, position the fusible web over the pattern element PAPER side up, and iron it, following the instructions. If you’re using Heat n Bond Lite, you should use medium heat without steam, and iron it for two seconds at a time until bonded. 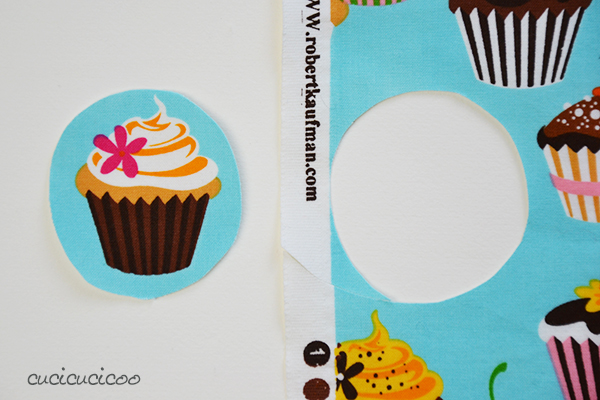 Cut out the fabric element, and you’re ready to attach it to your fabric base. But first let’s look at another two situations. 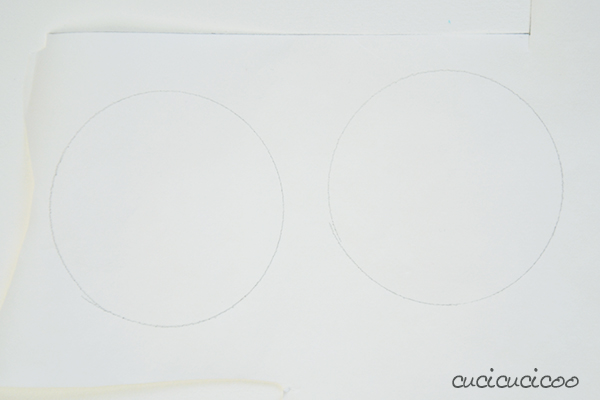 Situation #2: You want to cut a very specific shape out of solid-colored fabric. If the shape is symmetrical, just draw the shape on the paper side of the fusible web, leaving a bit of space between shapes. 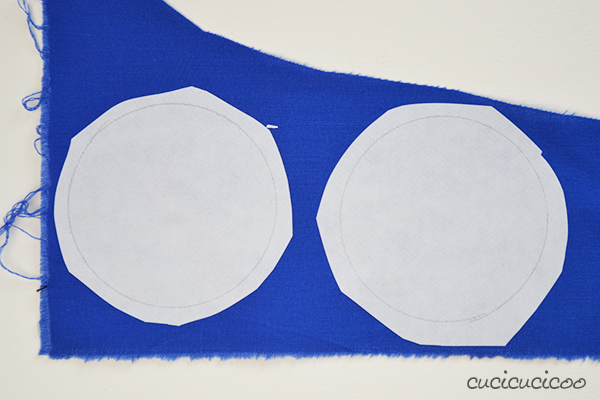 Cut around each shape and iron on to the wrong side of the fabric, as described before. 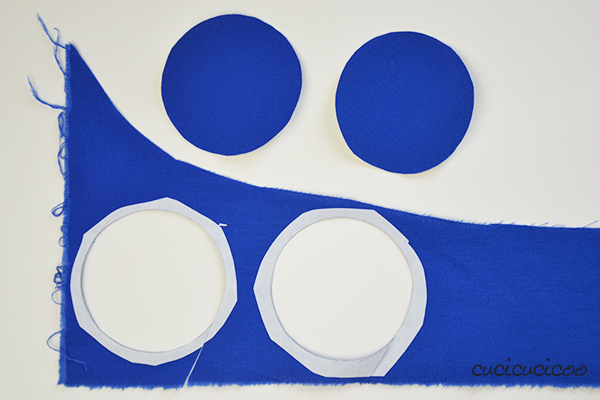 Cut along the drawn line, and you’re all set!

Situation #3: You want to cut a very specific shape out of solid-colored fabric, but shape is asymmetrical.

In situation #2, we drew the design on the BACK of the web. However the appliqué piece then gets flipped around, so if you have an asymmetric design, it will end up backwards. Therefore you need to prepare the appliqué piece backwards in the first place, so that it will go in the right direction after flipping it over. 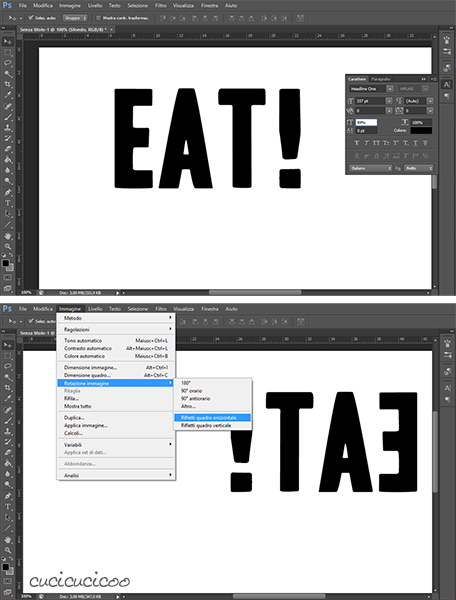 Letters are a good example of a direction-specific design, so I just wrote my text in Photoshop and modified it in the character panel (image on top) until it looked the way I wanted it. (Font: Headline One, 89% vertical scale, 100% horizontal scale, then enlarged.)

I then go to Image, Rotation, Reflect Horizontally to get the mirror image. (bottom image. I’m not totally sure that that’s what those commands are called in the English version of Photoshop. As you can see in the images above, mine is in Italian!) If you want to use an image instead of letters, just open it up in Photoshop and reflect it the same way. 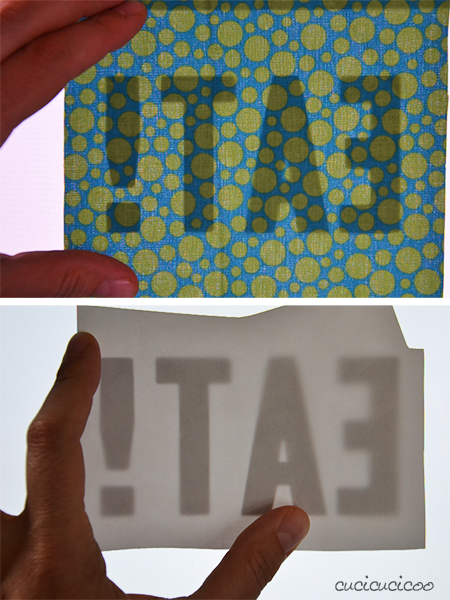 If you want, you can print out your image and trace it onto the Heat n Bond, however I prefer just using the same exact trick that I use for freezer paper stencils and that I also used for my play doh picture mats: tracing directly from the computer screen. 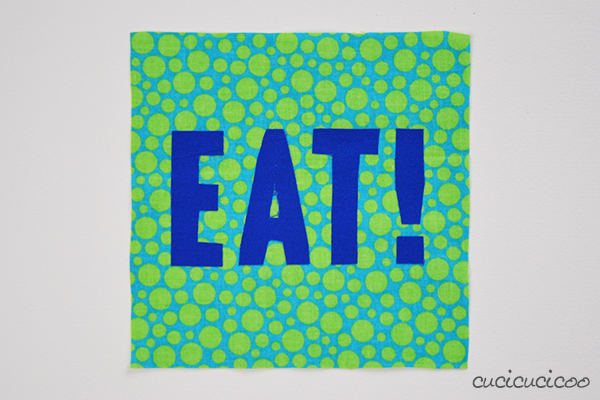 Iron the adhesive to the wrong side of the fabric and cut out as described in situation #2, and you’ll see that the letters are going the right way. Yah! 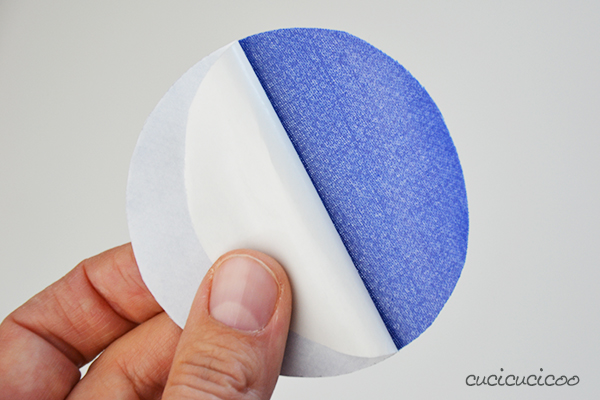 Now let’s attach the appliqué pieces to the base fabric. First peel the paper backing off.

Position the appliqué piece, shiny side down, on the right side of the base fabric and iron it according to the manufacturer’s instructions. For Heat’n Bond Lite, you iron for six seconds at a time until it is completely bonded. If you have overlapping pieces, start with the piece/s on the bottom, and work your way up. 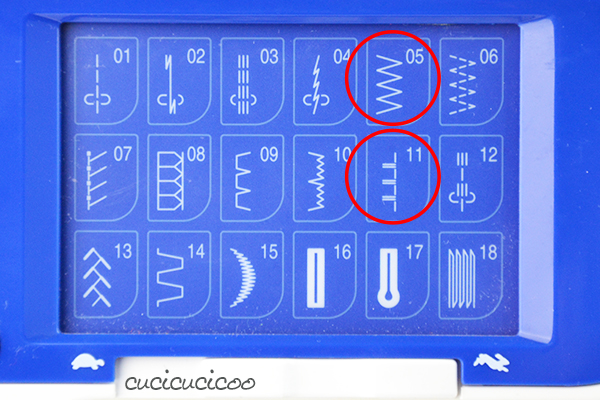 Now let’s sew down your appliqué patch to hold it down better. (In theory you could use just the iron-on adhesive, but after a few washings, it could start to come off.) You really could use pretty much any stitch you want, and it’s really just a question of aethetic preference. The two most common machine stitches used for appliqué are the zig zag stitch (#5 on my machine) and the blanket stitch (#11 on my machine). 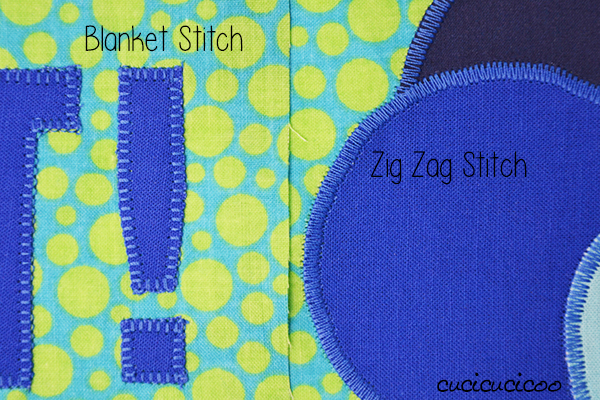 The blanket stitch is sometimes also called the appliqué stitch because it is very often used for this technique.

You already know about the zig-zag stitch from the lesson on that stitch, so you already know that you can change the width and length of it to make all sorts of variations. Let’s start with that first. 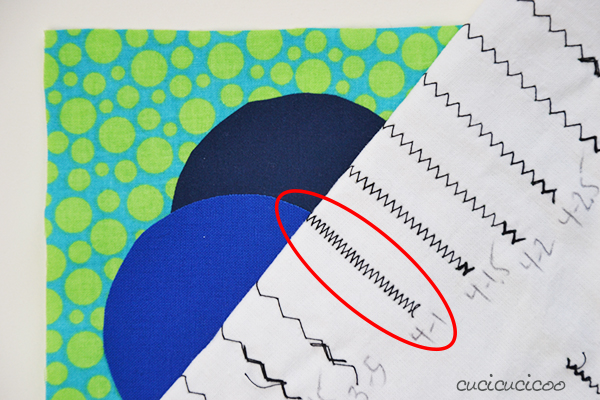 If you still have the zig-zag sampler you made in the zig-zag lesson, hold it up to your appliqué pieces. I prefered the 4 mm width for my particular shapes. If your shapes are smaller, you’ll probably prefer a smaller stitch width to be more proportional, and the opposite for larger shapes. I only sewed down to a 1 mm stitch length on my sampler. If you like that look, that’s fine and you can just use that stitch width/length. 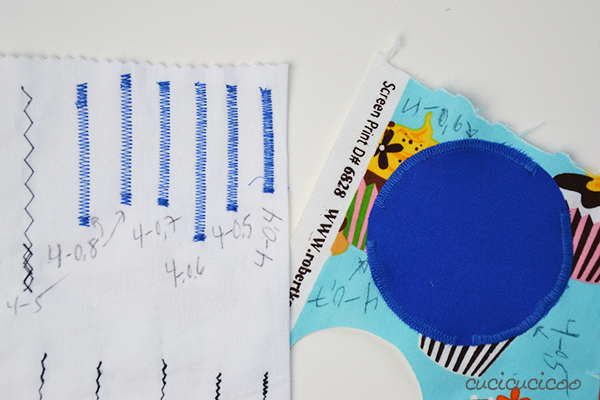 But I wanted a tighter zig zag, which is known as a satin stitch. So I added some shorter stitch lengths to my zig zag sampler, then tried some out on a scrap test piece. 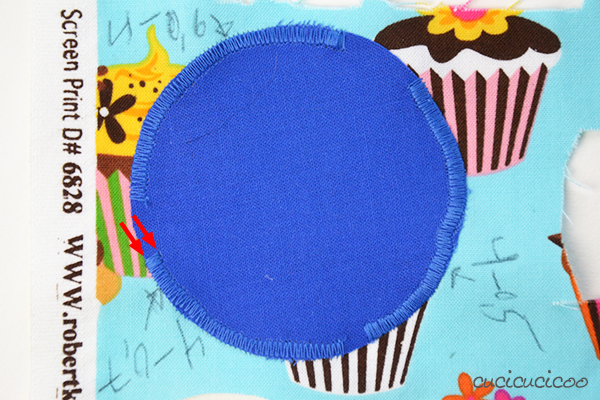 Let’s look closer to see the positioning of the zig-zag/satin stitch when doing appliqué. The right/outer side of the stitch should fall just beyond the edge of the appliqué, so that the rest of the stitch is covering the appliqué edge. The smaller your stitch length, the closer the stitches will be, the more thread you use and the slower it is to sew. Sew around corners and curves as described in the zig-zag lesson and be careful so as to avoid mistakes like I made on the right edge of this test piece.

In the case of overlapping pieces, start sewing the bottom pieces first. You will overlap the ends of the stitching of bottom pieces with subsequent stitching. 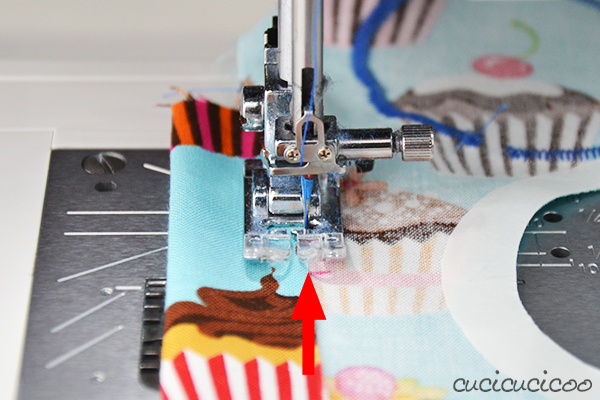 The ladder stitch (a.k.a. applique stitch) is faster to sew, but it can be more complicated to sew around corners with it. (I won’t get into many details here, but basically you always want to pivot around corners with the needle in the right position.) It is a three-step stitch. It starts at the right and moves forward one stitch. It then moves one stitch over to the left, then back to the right. And then it starts over again: forward, left, right. Forward, left, right…

When the needle is at the right, it should pierce the fabric just beyond the applique edge, as you can see above. You can adjust the length and width of this stitch to get it just right for your appliqué. Practice this stitch on scraps before sewing your actual piece. Here I just folded the fabric edge over. 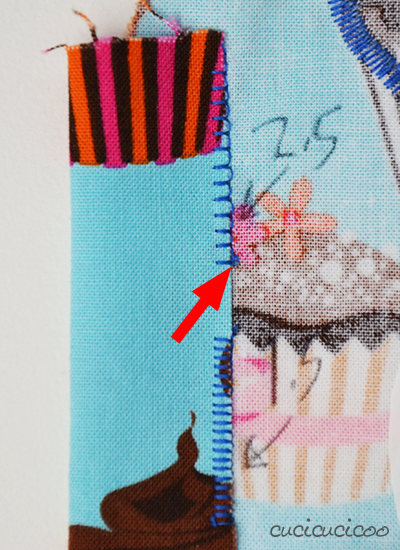 Here are a couple of my tests. See how the right edge of the stitch lines up with the fabric edge so that you can barely even notice it? 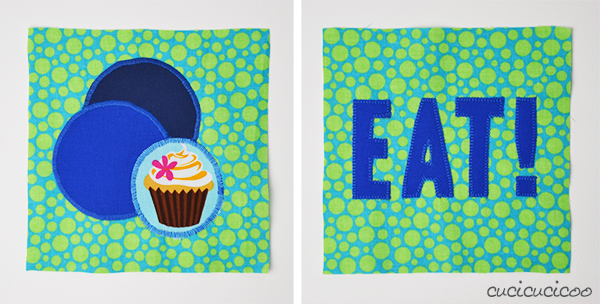 Work slowly, no matter which stitch you decide to use, because a messily-sewn appliqué doesn’t look very nice. 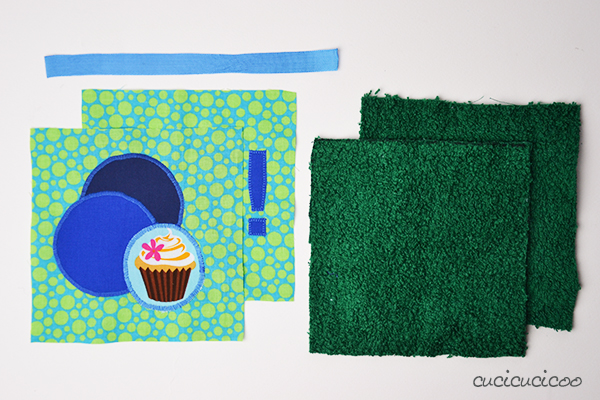 I hate to waste fabric, so I turned these practice pieces into a potholder. So, as per the potholder tutorial, I cut out another two pieces from an old towel and a piece of ribbon, and turned it into… 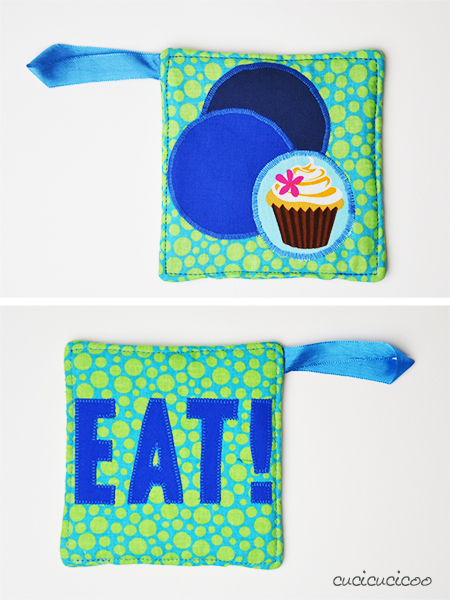 …a cute little potholder, ready for giving! (or using, but the last thing I need is another potholder!)

You can really do all sorts of amazing things with appliqué and it’s addictive and you’ll soon start appliqueing EVERYTHING! (Don’t believe me? I’ve used just this type of appliqué on these tree placemats, these bilingual placemats, underwear, melted pants, this heat pack, and a potty seat carry bag, among other things.)

This is a pretty limited tutorial with just the basics, but if you’re interested in learning more tips and tricks, I really suggest you read the appliqué series that I mentioned before. Coming up next is a practical tutorial on how to appliqué on knits, which is great for covering up ugly logos or stains on t-shirts!

This lesson on how to applique is part of the syllabus of Cucicucicoo’s beginner’s sewing course! Don’t forget to share pictures of your work on the Cucicucicoo Creations Flickr Group or the Cucicucicoo Facebook page!

23 thoughts on “How to Applique (with a sewing machine)”