Home » Natural Living (all) » In The Kitchen » How to peel prickly pears (cactus fruit without pain!) 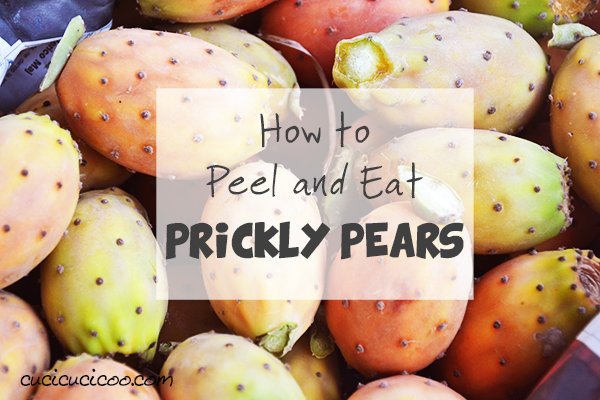 Something I love about living in a different country, language and culture is knowing a food or animal in my second language, years later finally looking it up in the dictionary to find out what to call it in my native language, and discovering that it’s a word I’ve always known without actually knowing what it was. So it made me laugh out loud when I eventually discovered that the Italian fico d’india (Indian fig), the fruit growing from the Opuntia cactus, is none other than a prickly pear! There are certainly no prickly pears in northeastern United States, where I lived until moving to southern Italy, so my knowledge of this fruit was limited to Baloo’s “Bare Necessities” in The Jungle Book. (The same thing has happened to me with mulberries, persimmons and turtledoves, among other things.)

Now, a prickly pear at first glance doesn’t actually look that prickly, in that there aren’t big thorns on it, or anything, and the cactus it grows from isn’t particularly dense in thorns either. The skin of the fruit, however, is covered in tiny needles. They’re so thin that you don’t even feel them when they enter your skin. The problem is that they sting like crazy when you touch that area of the skin and are nearly impossible to find and pick out. They are also invisible if they fall onto the floor, counter or dish towel, so you can uknowingly get stuck even if you’re nowhere near a prickly pear. For this reason, my husband despises them. But I just can’t get enough of these things. I love the taste, the crunchy seeds, the thirst-quenching juice… And they grow all over the place where I live, so I can generally get loads of them for free!

Luckily last year my father-in-law taught me how to peel prickly pears so that you don’t get stuck at all with those awful little needles and they get disposed of properly. So now, when prickly pear season rolls around at the end of August, I’m all ready for it! Would you like to learn how to enjoy this fruit without the pain of the prickles? Well then, read on! 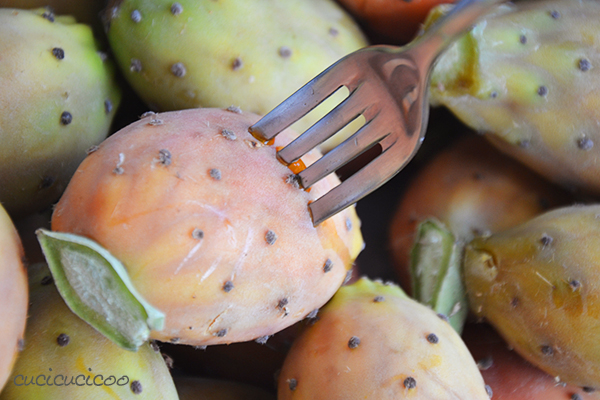 First off, poke one with a fork to pick it up. Prick once and leave the fork where it is. Every time you stick the fork in, the more the inner fruit gets broken up and the harder it is to peel. 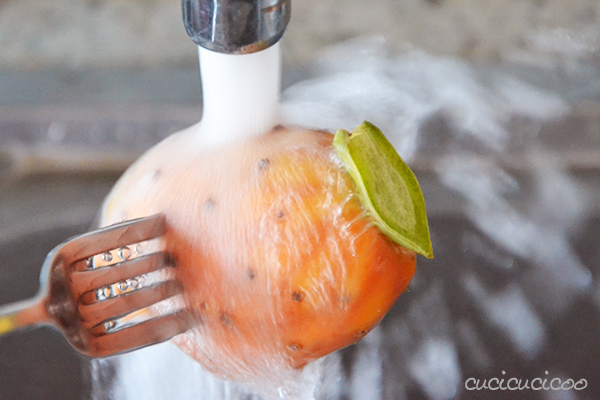 Hold and rotate the fruit under running water a bit. The force of the water knocks off most of the needles. I suggest emptying the sink of all dishes so that all the needles that fall go down the drain, not onto anything anyone will be touching later on. 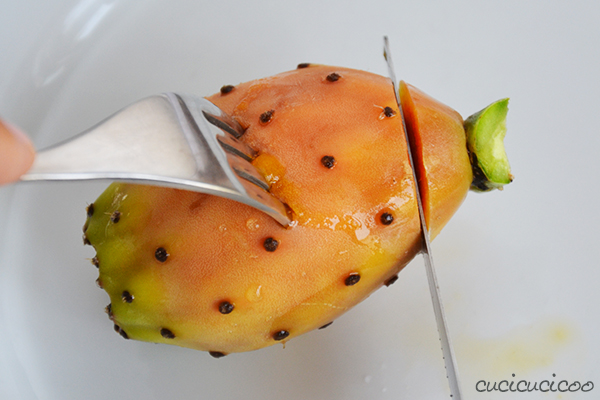 Hold the prickly pear still on a plate with the fork and cut one end off. 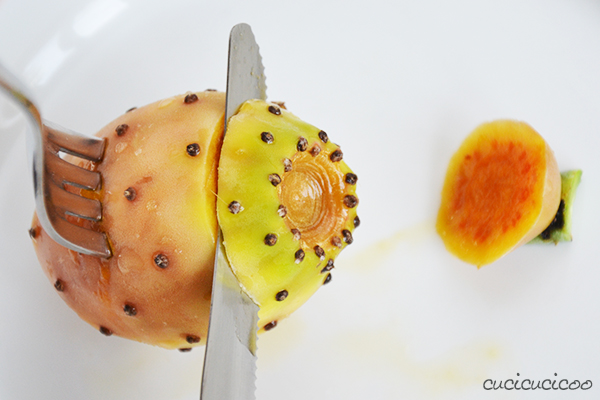 Rotate the fruit around without taking the fork out and cut the other end off too. There is an indentation in the bottom of the fruit, so make sure that you cut it off all the way. 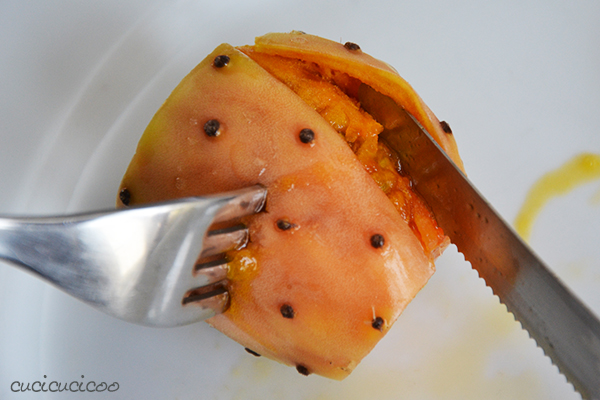 Make a slit down one side of the skin without cutting into the inner pulp. Stick the knife between the skin and pulp on the side opposite the fork to start separating them. 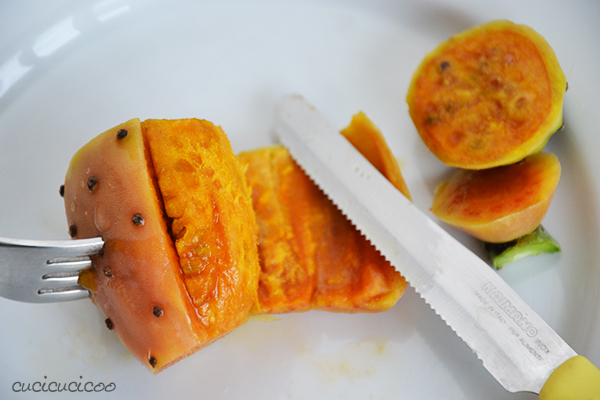 Continue peeling the skin from the pulp on the first side. 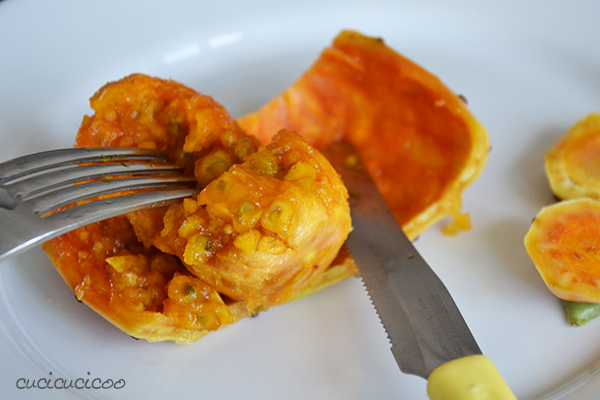 This will be a lot easier if the fruit is perfectly ripe. If it is overripe, the pulp will not hold together very well, making it hard to peel the skin from, as you can see above. 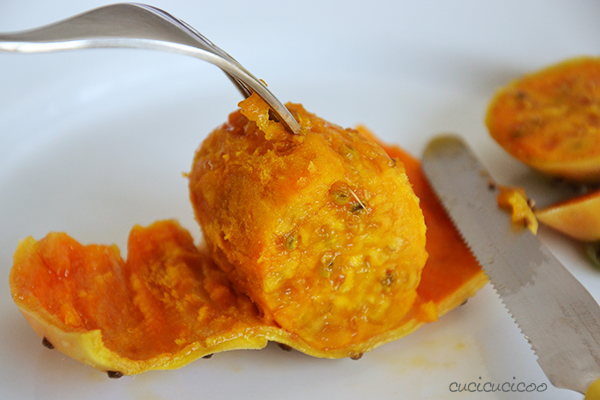 Move the fork over so you can separate the peel from the pulp with the knife on the second side. (That little bit of something on the cut end of this fruit isn’t a needle but a little bit of fibrous fruit.) 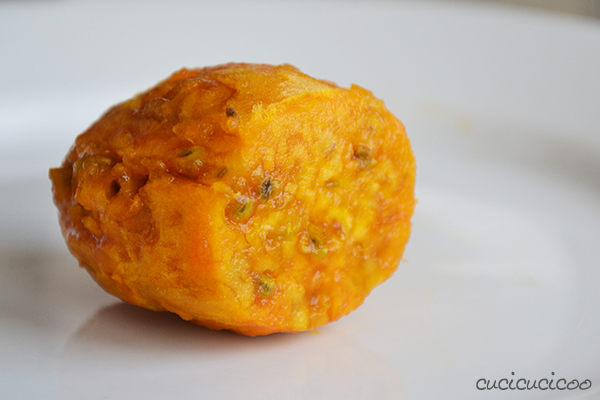 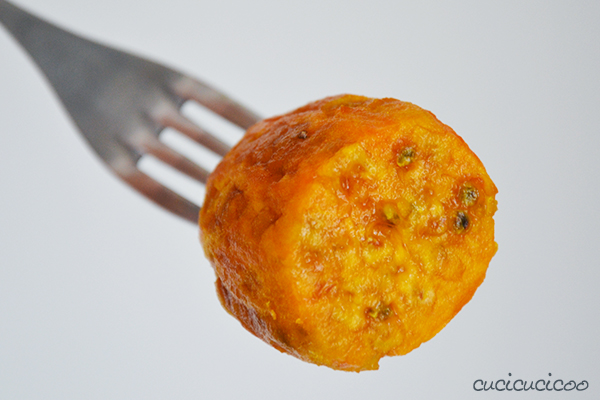 Make sure you Pin this post so you won’t forget how to enjoy eating this refreshing and healthy fruit without the pain! 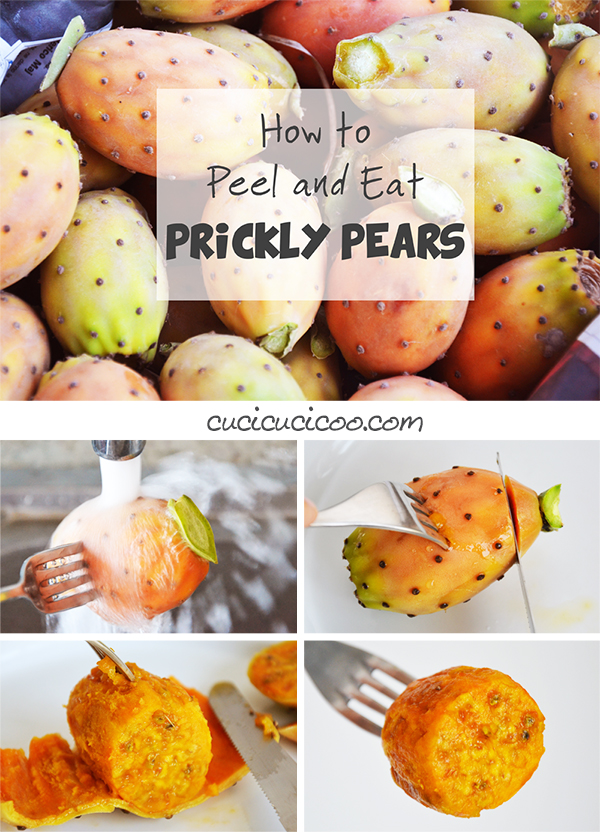 Question of the day: Is there anything you love to eat, even if it’s a big pain in the butt?

I love my prickly pears despite their prickly dangerousness. Another thing that I’ve always loved eating is lobster and, being a true New Englander, I know how to clean every tiny scrap of anything edible from inside a lobster. I actually got complimented on my lobster cleaning skills by a waiter in New Hampshire this past summer. I also used to be a waitress in a seafood restaurant, and it would drive me insane that nearly everyone who ordered lobster would pretty much just eat the claws and leave the rest because they had no idea how to go about it.

12 thoughts on “How to peel prickly pears (cactus fruit without pain!)”