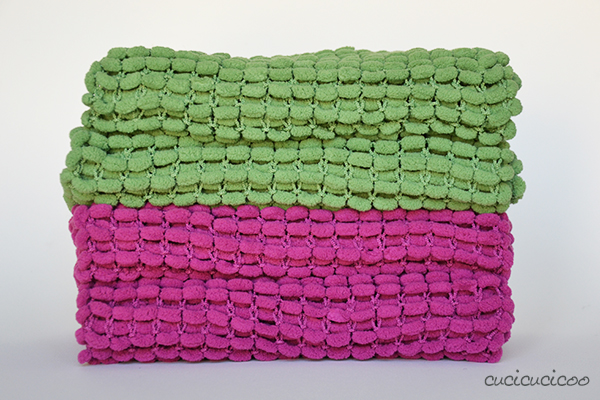 I’ve been working more than usual lately on my knitting technique and also been learning the basics of crochet. From the little that I know of each, I feel like crochet is much more versatile and I’m having fun using it in non-traditional ways. But I’ll write more about that another time. Today I want to write a little about some of my latest knitting. 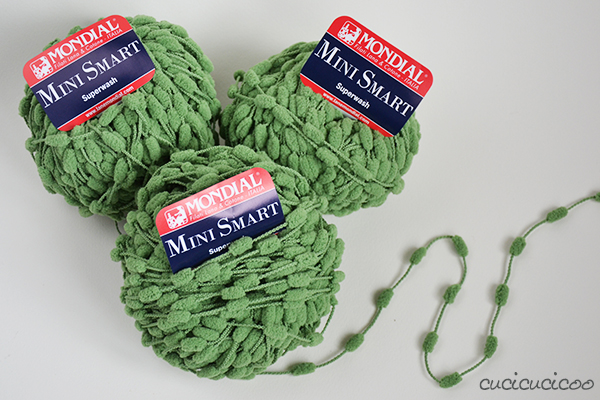 One recent discovery for me was pom pom yarn. My tiny local craft shop had this mini pom pom yarn on sale at €1 per skein, so I bought three skeins each of three colors. 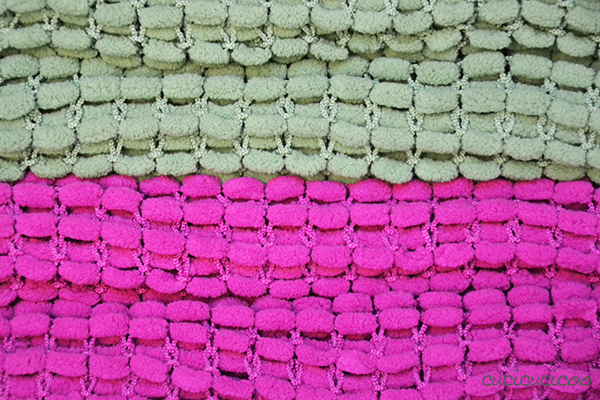 By simply knitting, the pom poms line up like so. I chose to just knit, which created rows of pom poms on each side of the scarf, but by alternating knit and purl rows as you would for a regular stockinette stitch, the rows end up all on one side much closer together. Some people like to make scarves like this, but I prefered making both sides the same, so I just knit the whole thing. 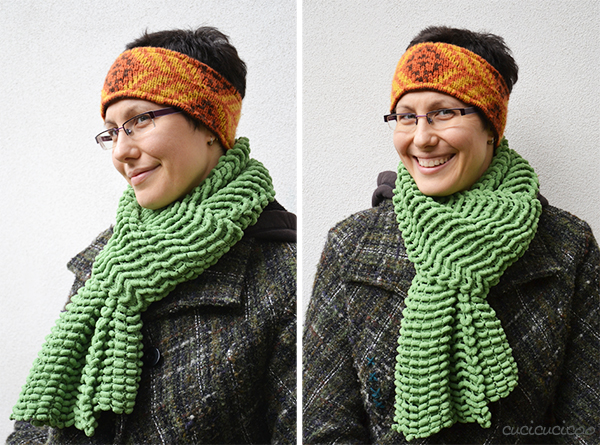 I thought that, having so many spaces between the pom poms would let cold air through, but once I made a scarf with this yarn I was really surprised how warm and cozy it is. I also much prefer the look of the mini pom poms as opposed to the larger ones. 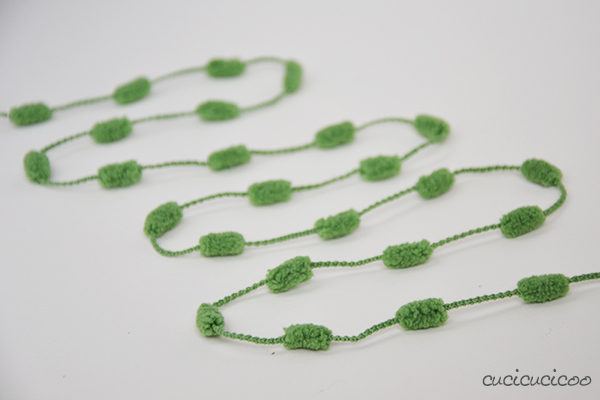 The yarn is basically a thinnish yarn with pom poms even spaced along it. You only work on the thin part, with one stitch per space between pom poms. It takes just a little to get used to holding the yarn so that you can space stitches properly, but then it’s actually really easy. Seeing as the spaces are already set, you don’t have to be too worried about working your stitches evenly and it doesn’t matter if you use slightly larger or smaller needles than indicated on the yarn’s packaging. 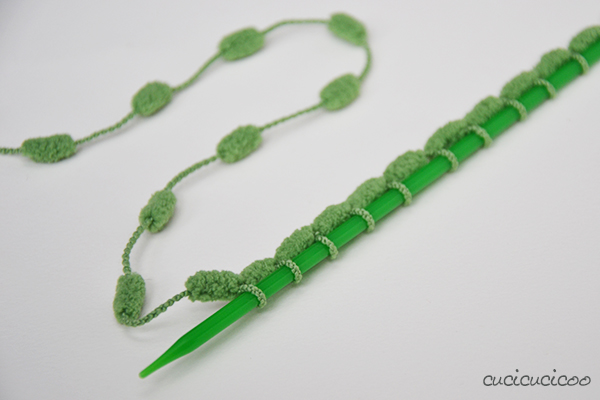 Casting on is a bit different than with regular yarn. I used this method, which is pretty easy although you do have to be careful to line up the pom poms. For my yarn (Mondial Mini Smart) I cast on 18 stitches. Then just continue knitting. When you need to join two strands, you just tie them together as seen here. (Both links are Italian videos, but you can get an idea of how to do these things by just watching.) 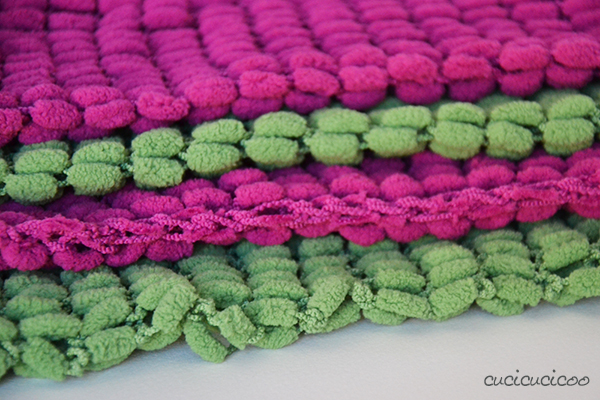 The only real problem I had was with binding off. Using a classic bind off pulls the yarn terribly so that one end of the scarf looks cinched. I used two different bind off methods for the two scarves I’ve finished so far. Looking at the photo above, you’ll see the cast-on ends of the fuchsia and green scarves, which look perfectly nice. Under those you can see the bound off ends of them, which are considerably less nice-looking. For the green scarf I used the method of that first video tutorial I linked to above, but I had some real issues with it, perhaps because I was using mini pom pom yarn, not a larger one, so the spaces between pom poms was smaller. Who knows. So when it came time to bind off the fuchsia scarf, I looked around You Tube and tried the method shown at 7:26 minutes in this tutorial, cutting off the outer part of the pom poms to be able to do a normal bind off. I prefer how this method looks, though it’s far from perfect and it was really a pain in the butt. It took quite a while to trim enough pom poms and I accidentally cut through the yarn twice, meaning I had to join the pieces back together again. Oh well. I am still working on a purple pom pom scarf, so perhaps I’ll try another method then. Have any of you used this type of yarn? How do you like to work with it?

*EDIT* (28/01/14) I just bound off my third mini pom pom scarf and decided to try the first method I’d tried, the one in the first tutorial link above. This time it went considerably better, so let me share a couple of tips. The method says to knit the first stitch. First tip: stick a needle protector or row counter that is tight enough on the left needle to keep the stitches from coming off the needle. Then slip the stitch off the right needle and twist it around clockwise twice. Second tip: Keep that stitch on the needle and twist the needle around clockwise one whole time (so it’s like twisting the stitch twice). Then pull the string of wool through the twisted stitch. Third tip: Keep the needle inside the stitch to help keep it open and to stop it from twisting around. If you’re using larger pom pom yarn, this might not be necessary, but it makes it much easier with the mini pom pom yarn, which has less yarn between pom poms. Help opening up the stitch around the needle with your index finger and thumb while pulling the yarn through. Fourth tip: Pull the string of yarn through gently until you have only one more pom pom to pull through. At this point pull it VERY gently while holding the pom pom immediately before that stitch in place. I realized that part of my trouble was that I often either accidentally pulled that pom pom before the stitch through the stitch or opened the stitch so wide (so as to pull the pom poms through) that the widened stitch loop would pull that previous pom pom out of position and into the stitch. You might be thinking that you wouldn’t be stupid enough to make these mistakes, but never say never! Oh and fifth tip? Bind off in good lighting and not when you’re tired! 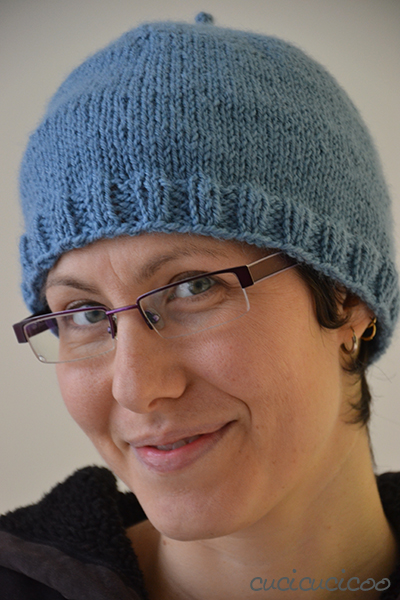 And look what else I managed to knit: a hat! A real hat, knit top-down starting with double pointed needles to make a small i-cord and the top of the hat, working the increases with the help of stitch markers, switching to a circular needle, knitting a ribbed edge on a smaller circular needle, and binding off. Before this hat, I hadn’t ever done a single one of those things. The hat is far from perfect, but I was pretty stoked that I managed to knit something non-rectangular! 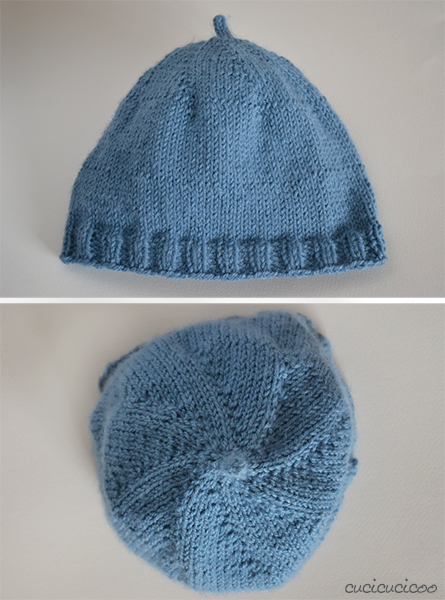 But something even cooler about this? I made it following a KAL (Knit ALong) on Facebook to knit a hat without a pattern! You just start and when you think it’s wide enough to reach around the crown of the head (not around the widest part of the head), you pass a piece of thinner yarn through the loops, take them off the needles, and check the fit. You can leave these lifelines in after putting the loops back on the needles in case you make a mistake, that way you can unravel your work and start again at the lifeline. You can still see the marks where my two lifelines were along the side of the hat. I like how my top spiral came out. 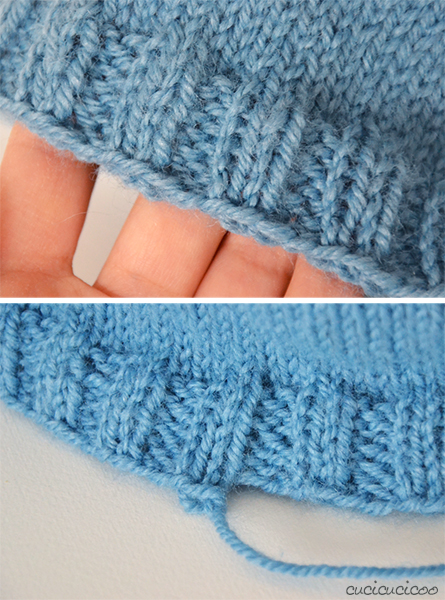 I worked a regular 2 x 2 ribbing pattern along the edge with a slightly smaller needle, but I should’ve started the ribbing sooner to make it wider. I bound off with a suspended bind off, but I don’t like how it looks, so next time I’ll try a different method. I also realized when I came to the end that, having worked on a circular needle, my last bound-off stitch was not even with the first one, however a friend later showed me how to pick up that first stitch again to bind off the last one evenly. 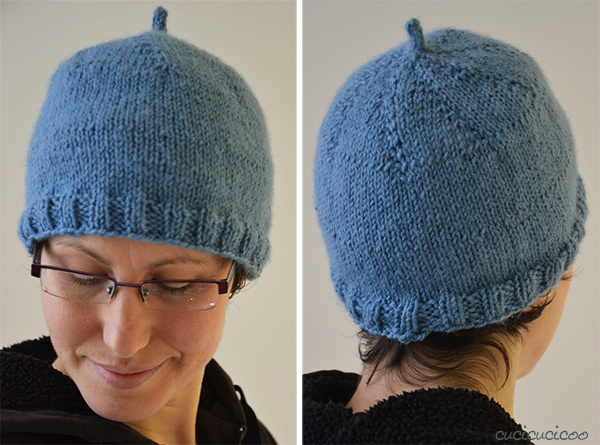 Considering that it was my first non-rectangular knitting project, I was pretty dang thrilled with how it came out, but alas, I made it too wide and it was just too loose around my head. (Don’t pay any attention to my dirty, grown-out short hair. I was badly in need of a trim here, which I got in time for the scarf modelling shot above!) So I donated it to the friend who helped me with the binding off, as she has been collecting knit hats and scarves for the local homeless population. I wanted to help out by donating more but, seeing as I’m considerably faster and more accomplished at sewing, I decided to sew the rest of my contributions. But more about that in the next post! And my next knitting project? Now I’m participating in this other Facebook KAL/CAL, but with English language patterns!