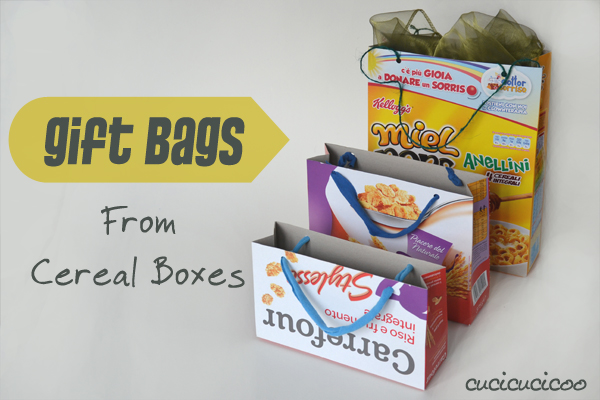 Panic time! If you’re anything like me, you have a last few gifts hanging around waiting to be wrapped (or perhaps all of them), so today I want to show you the last idea for this season of my eco-friendly gift wrapping guide. This one is really super fast to whip up and you can just stuff your gifts right in them, which is why I left it for last. 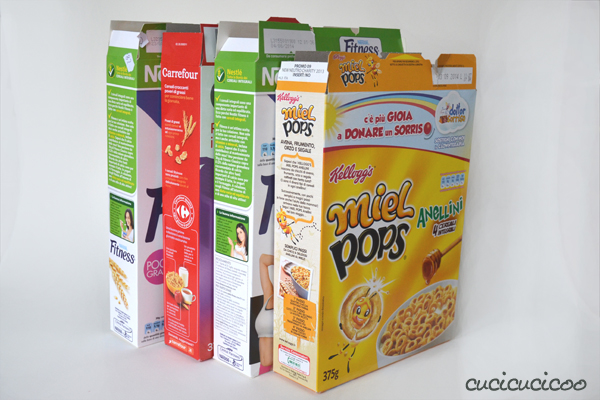 You probably have lots of cereal boxes hanging around like I do, which is why I love using them for lots of projects. I already wrote about how to turn them into cute gift boxes, so today we’ll turn them into colorful, eco-friendly gift bags that will probably also become a topic of conversation at gift giving times. If you’ve been following me for a while, you might remember having seen these gift bags when I made a newborn hat trio and when I received one from fellow blogger Rachele. 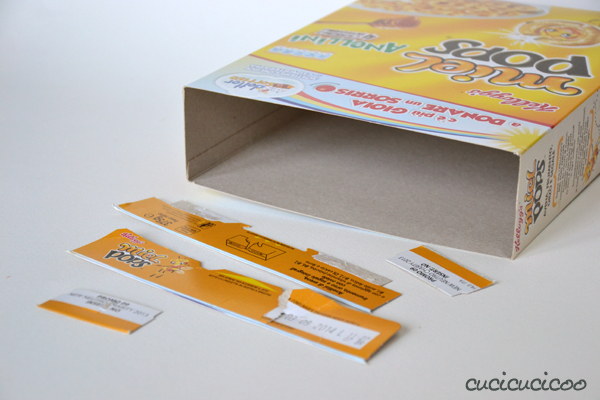 To start, cut off the top flaps of your cereal box and discard them (in the recycling bin, obviously). 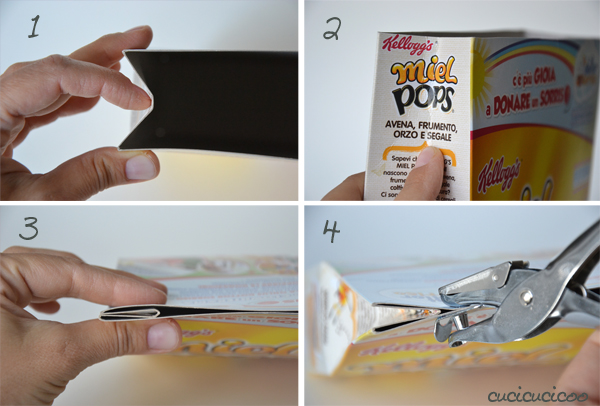 We then need to fold in the centers of the sides of the box, but just at the top where it will close. Push in the center with your finger (1) and push in the fold about 10 cm or so down (2). Squeeze the fold down to tighten it up (3) and punch a couple of holes at the top of the box slightly further in from where the fold is (4). 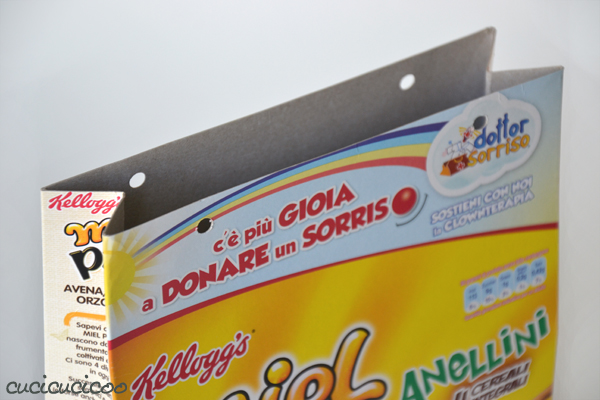 Now your bag is formed and you have holes to attach handles. 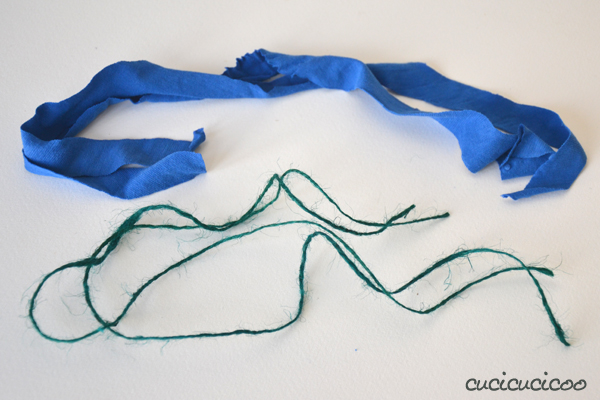 You can use whatever you want for the handles. Cut a couple of lengths of ribbon, twine, cord or, my personal favorite, strips of jersey from a t-shirt (but make sure to cut it going across the t-shirt, not up it). 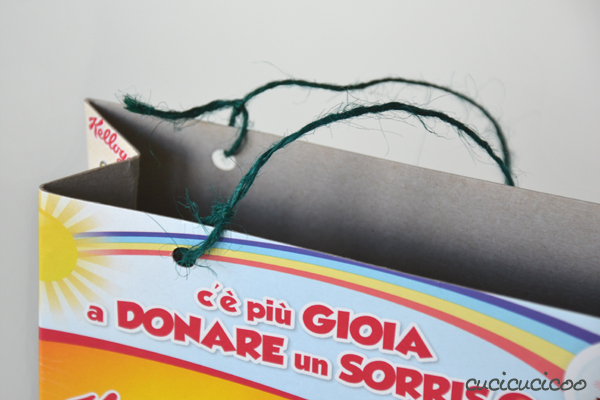 And simply tie them onto the holes in the top of the box. And you’re done! 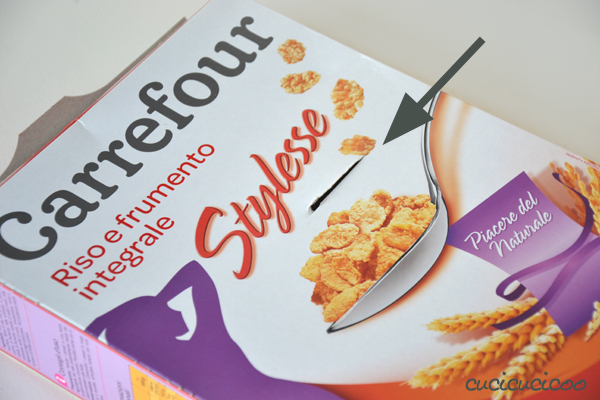 But let’s say you don’t want a bag that’s as big as a whole cereal box. Then use one box to make two shorter gift bags! Don’t cut off the top flaps of the box. Stick your scissors into your cereal box about halfway down. In this case I chose to cut it about 2/3 of the way down so that the spoon of cereal stayed intact. 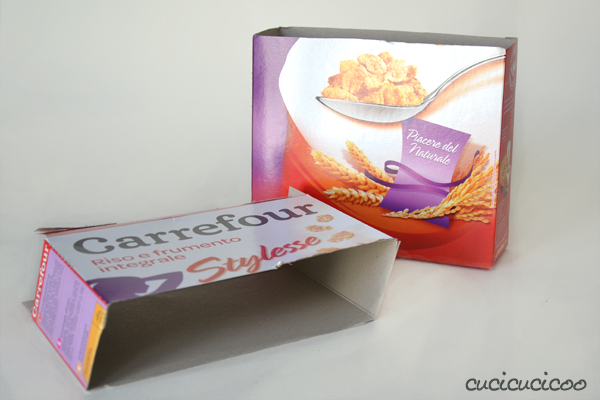 Then cut all the way around the box, severing the top from the bottom. 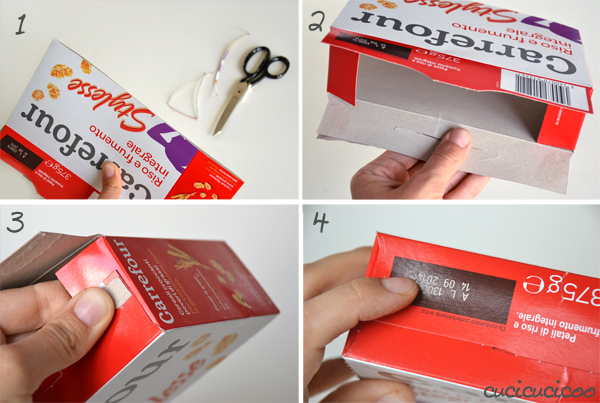 Then even off your cutting. You can flatten the top part of the box to make it more even (1). You continue with the bottom of the box as if it were an intact cereal box, as described above. You will have to close one end of the top part, though, to make the base of the bag. If you want to keep the graphics in the right direction, you’ll have to cut slits about 2 cm up each corner at the bottom and fold inwards to make new flaps which can be glued together. This would’ve made a pretty shallow bag in my case, so I decided to just ignore the upside-down graphics and use the original top flaps as a bottom closure. Whichever way you chose to do it, you first need to apply glue to the larger flap which gets folded down first where it overlaps the smaller flaps (2). Press them together well (3). Do the same with the other larger flap, sticking the the closure tab in place when pressing closed (4). 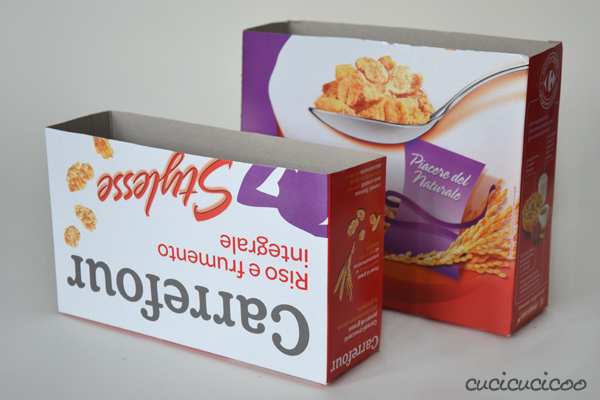 And there you have your two box parts ready to be folded, hole-punched and handled! 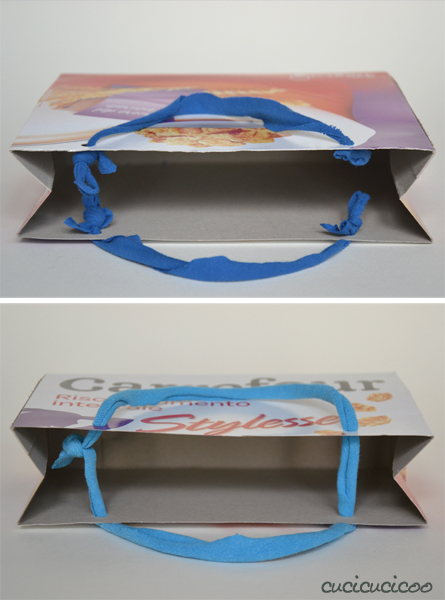 Another way you could tie on the handles is to cut one long length of your chosen handle material, slip it through all four holes and tie a single knot so that it makes one big loop that can be pulled out as one longer or two shorter handles. The image above is to show you the difference between strips of a non-stretchy t-shirt (above) and wider strips of a stretchy t-shirt which has been pulled to make it roll into a tube (below). I much prefer the second effect, in part because it hides any irregular cutting of the fabric. 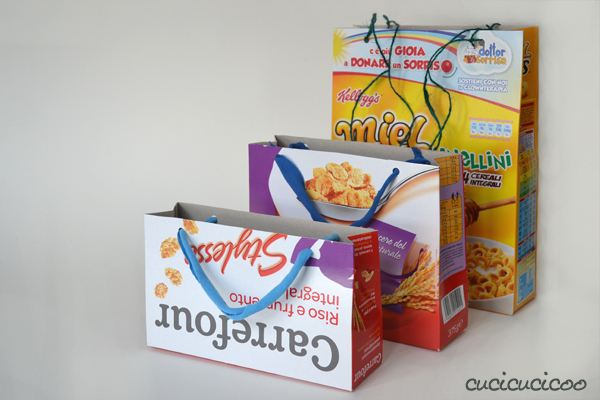 And look at that! In just a few minutes you can whip up some super easy and fun gift bags. If you want to keep the bag closed, you can also punch another pair of holes in the center top of the bag, slip a smaller length of twine/fabric/etc through and tie it closed like I did for this one. Another option, if you don’t want to deal with handles, is to just cut an oval hole in the top of the cereal box, like I saw here, but I prefer straps. If you want to make the bag super fancy, stick some upcycled tissue paper (from clothing packaging, for example), newspaper, comics pages or whatever inside before putting in the gift and fluff it up around the top of the bag. You can see in the first picture of this post that I used a big piece of organza that was wrapped around a plant someone gave me once. Be creative and you can create unique gift wrapping that will get people talking about how important it is to be eco-friendly! For more ideas, take a look at these other ideas and get wrapping! 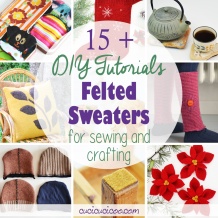 December 1st…break out those advent calendars!