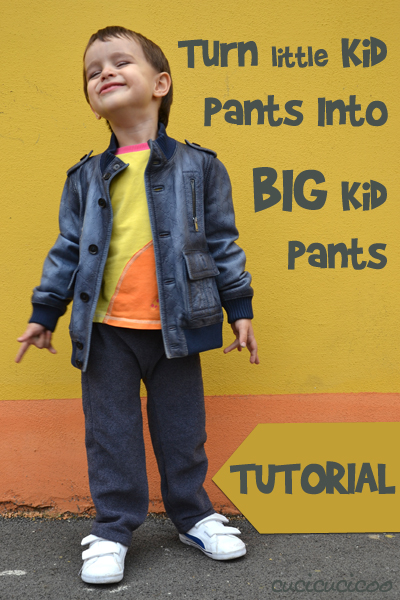 I recently wrote a post on the upcycled t-shirt underwear I sewed for my little boy when he was potty trained. One of the nice things about children wearing underwear (besides the obvious plus of not having to deal with diapers anymore) is that you can usually get twice as much use out of their clothing because when they lose the bulk of a diaper, their waists and bums become slimmer and so waistbands continue to fit even as they grow. This works fantastically well in the summer when kids are wearing shorts and skirts. In the winter it can be a little more complicated because children also have that funny little tendency to grow not only in the waist, but also in length. So even if pants fit perfectly in the waist due to the lack of a diaper, they might be too short. 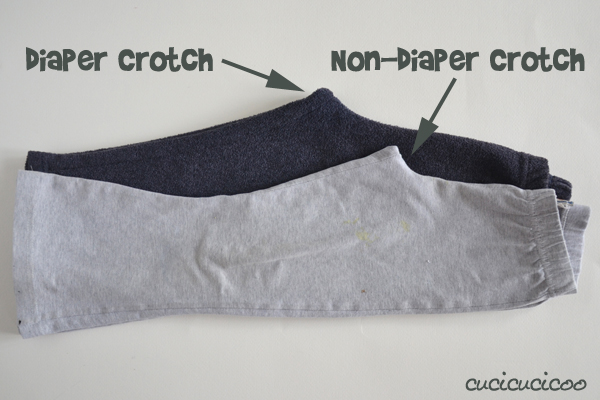 Often, however, you can get around this.  You see, most clothing manufacturers take diaper bulk into consideration, making clothing not only wider in the diaper area, but also higher so that the waistband can rest above the top of the diaper. Once the diaper is gone, there’s no need for that extra height in the waist, but it’s always handy in the legs. If you look at the above picture, you can see the difference between a pair of pants for a child in diapers (size 2 years) and a pair of (stained) pants for a child out of diapers (size 3 years). Notice that the length from hem to waistband are exactly the same, however the crotch of the size 2 pair is considerably lower to take account of shorter legs and diaper bulk. 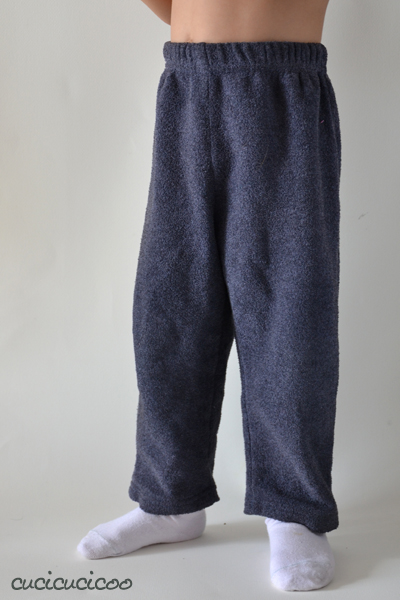 This is what they look like on my little guy. See, they fit, but the crotch is way too low. So we’re going to raise that crotch up so that it fits him perfectly and doesn’t feel funny or get in the way. Don’t let the many photos scare you. This is a super easy fix-job and will take you 10 minutes max. 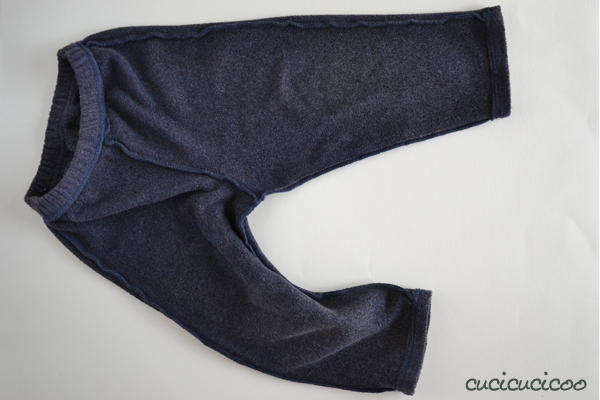 Let’s get started. Turn both pairs of pants inside out. Flatten the size 2 pants along the inner leg seam from the hem up to the crotch on one leg. Then flatten the crotch seam upwards, taking care to match up the seams on both front and back. I suggest you do this on the right leg (as seen when inside out, as in the photo above) for a reason that’ll make sense later. 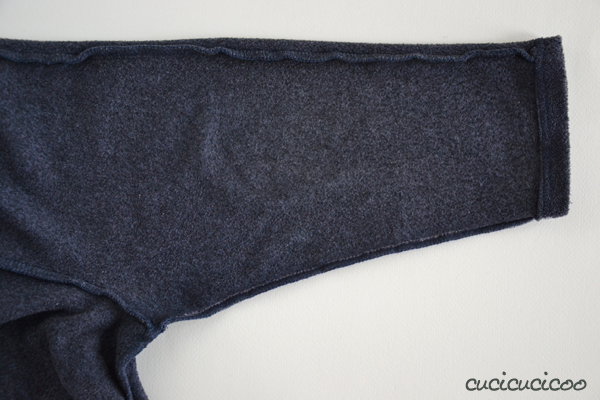 Do not worry if the outer seams are not flat. We will only be working on the inner seams. 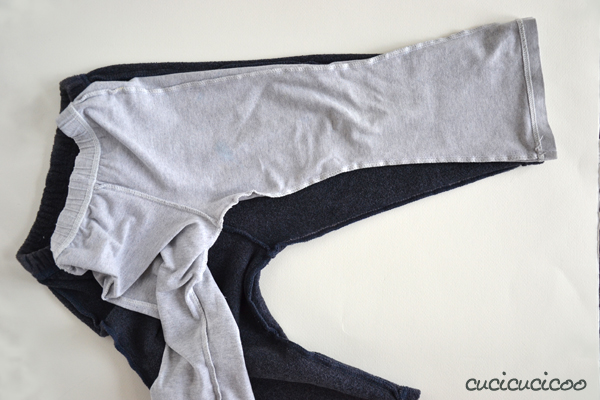 Now place the size 3 pants (inside out) on top of the size 2 pants, flattened out in the same way. Make sure to align the bottom hem, crotch seam and the front waistband of both pairs. You might want to fold the back of the size 3 waistband under so that you can better match up the fronts of the waistbands. 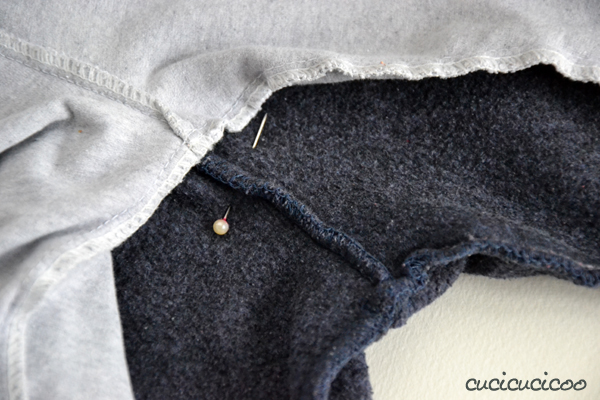 Place a pin where the size 3 crotch lies, checking again that the size 2 crotch seams are laying flat and together. 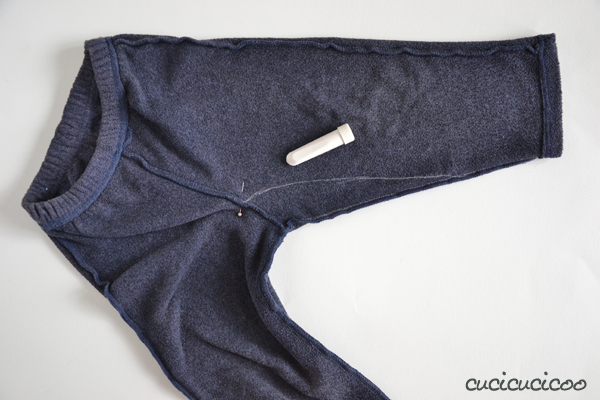 Using the size 3 pants as a guide, draw a line from where your new crotch will be down the pant leg as far as you want it. I didn’t follow exactly the shape of my size 3 pants because I wanted straight legs on the size 2 ones. I used a powdered chalk wheel roller to mark my line on the dark fabric, but use whatever you happen to have. 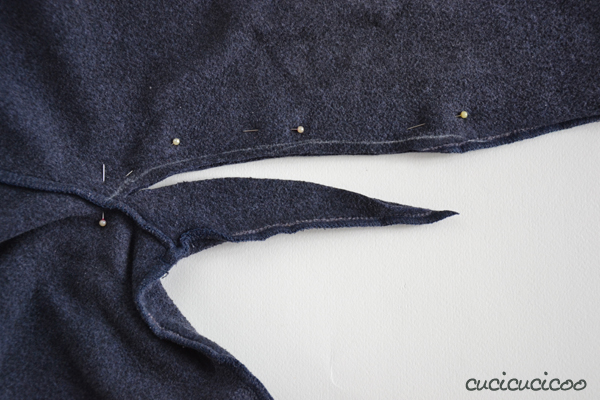 Pin along the line on the side towards the outer seam. Carefully cut on the other side of the line, at whatever seam allowance you want, up to the crotch seam. 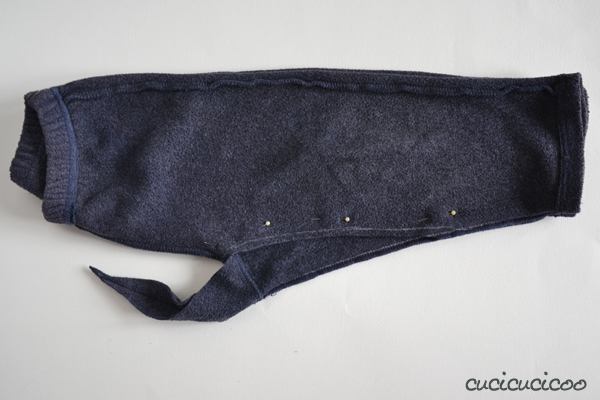 Fold the pants in half at the crotch seam with the pinned and cut leg on top. 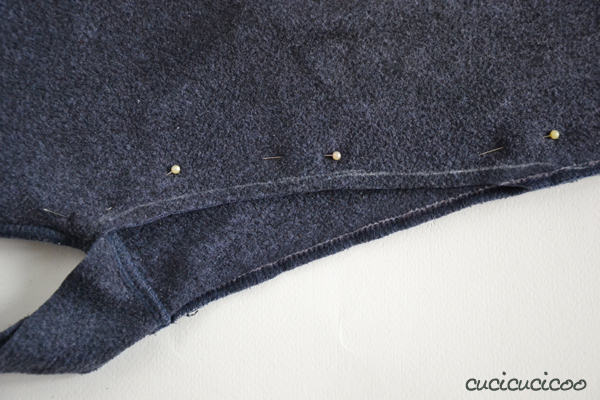 Make sure to line up all seams correctly and are flat. 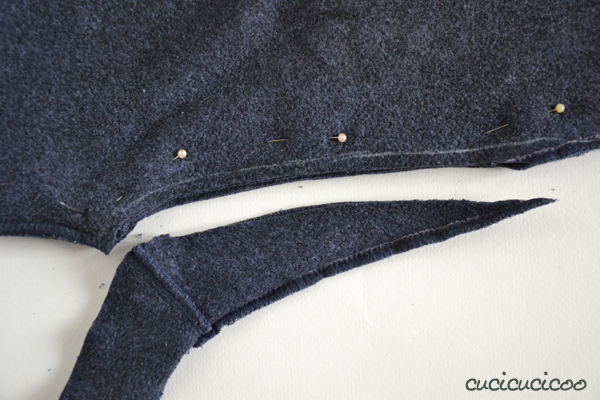 Now cut the other leg using the first leg as a guide. 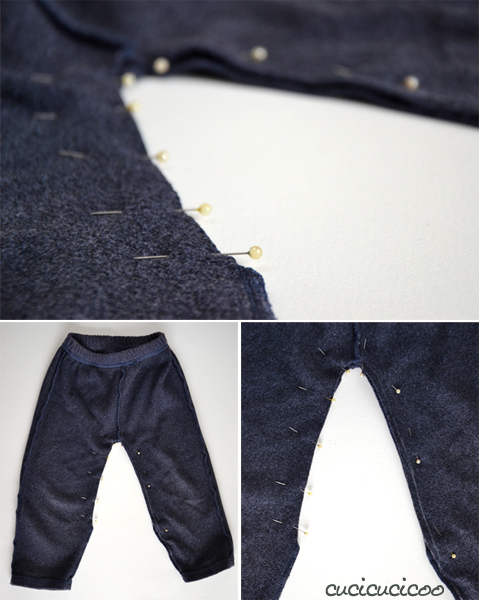 Unfold the pants and pin up the other leg. 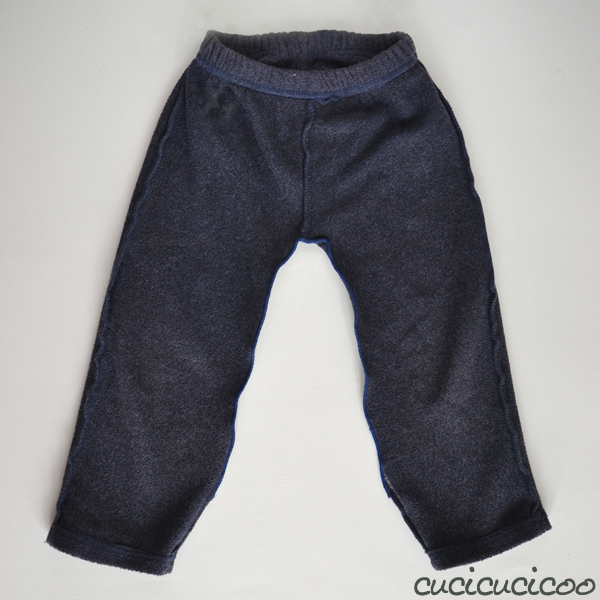 And sew up from one leg seam, up across the crotch, and down the other leg in one go. I found it easier to start on the leg with the drawn line and just continue on the other leg with the same seam allowance. This is why I suggested drawing the new seam on the right leg in the first step of this project, so that it can be fed through the sewing machine on that leg first with the line facing up as a sewing guide. Also make sure to merge your new seam into the original seams smoothly. If this merging is sort of bumpy, just sew over your first stitches to make it straighter. 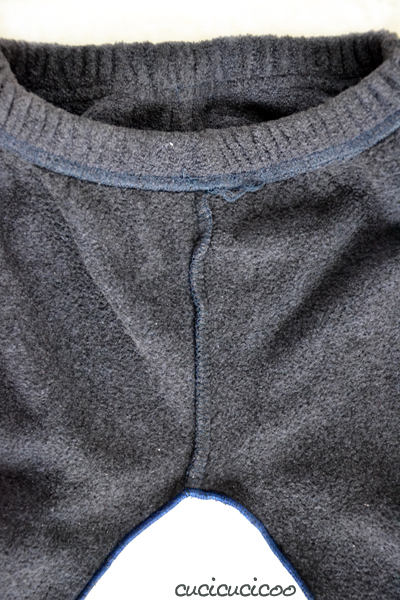 Don’t make your curve between the legs too tight or else the pants will fit funny. It’s better to make it somewhat wide.

You can see that I chose to use my serger but a regular sewing machine is fine for this project. Just make sure to zig zag the fabric edges if using a fabric that will fray in the wash. 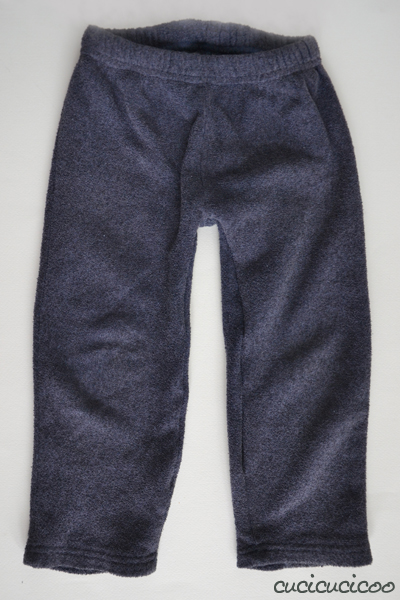 Turn the pants right side out again and check out your handiwork! 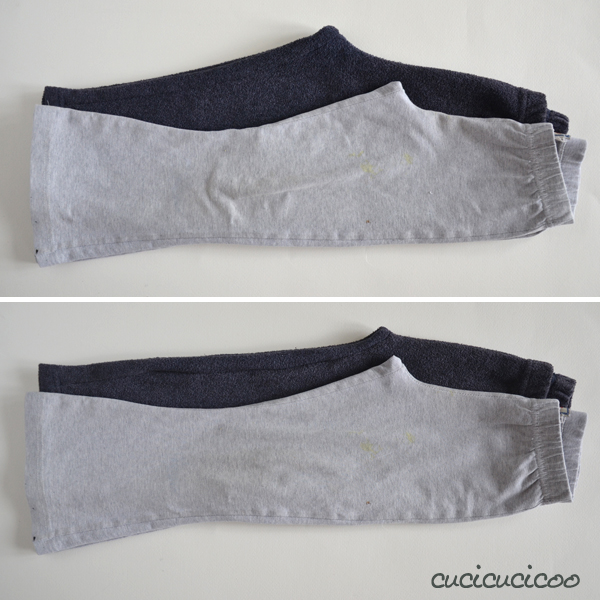 Take a look at how the crotch has moved up, thereby eliminating extra space over the underwear and adding length to the legs. By keeping the inner leg and crotch seams flattened and aligned, you can see that the back of the waistband continues to be higher so as to provice more space for that cute little bum. 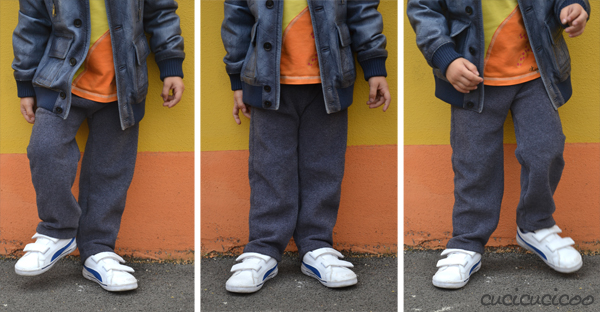 All that’s left to do now is to try them on your little model. Much better for moving around now! 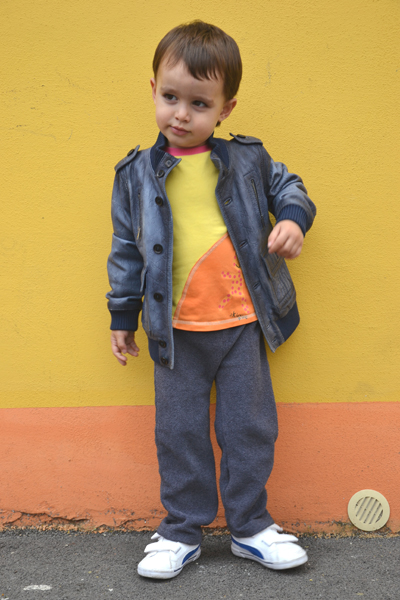 And there you have it! With just 10 minutes and one seam, you’ve salvaged a pair of pants for your little one, as well as a few bucks in your wallet!