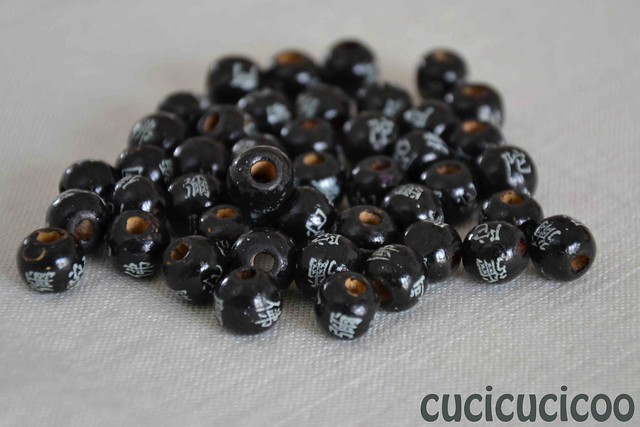 I’d had these wooden beads in a glass jar for nearly 10 years. I’d saved them from… are you ready?… a pair of flip-flops. Yes, that rubber part that keeps them on your feet? They were covered in these beads. They were cute, but ridiculously uncomfortable and therefore unwearable. Just recently it occurred to me to show them to my Taiwanese friend to find out if the characters meant anything or not and she told me that they’re mala beads, or Buddhist prayer beads for a Buddhist rosary! On flip flops, go figure! 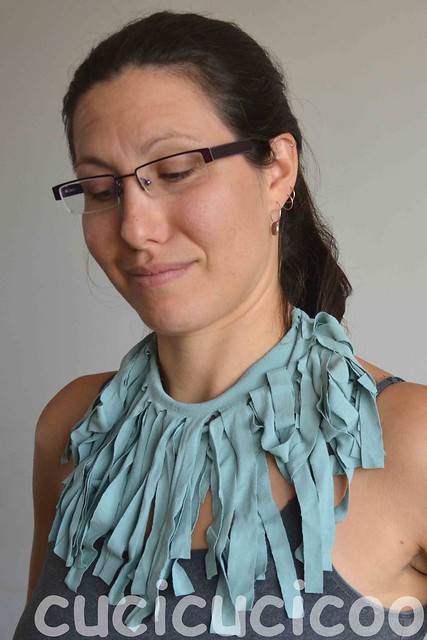 I thought I could make a necklace from these beads with t-shirt yarn. Originally I wanted to make it like the first t-shirt necklace here, but then I remembered this refashioning fail from the same general time period. 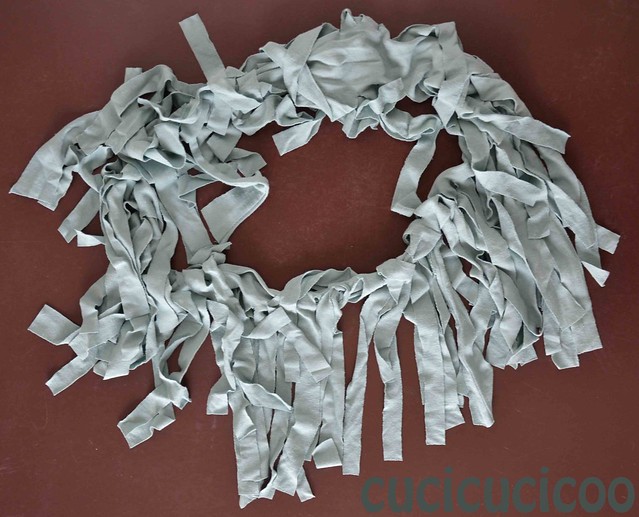 In my attempt to make something somewhat wearable, I’d cut pratically the whole shirt into strips. Once I’d given up, I stuffed it in a box of future refashions, awaiting inspiration. The Buddhist prayer beads provided it. 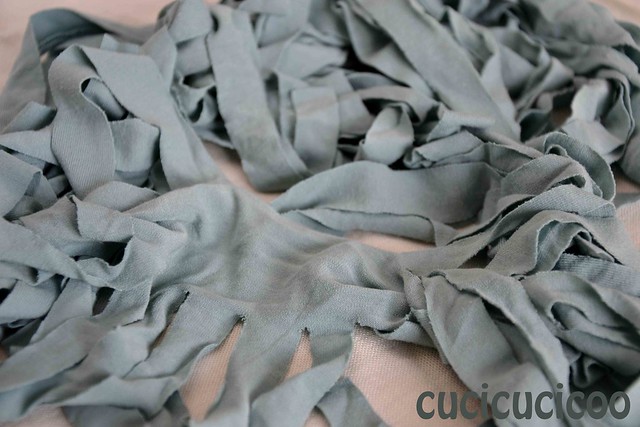 There was only this central part keeping the strips together. 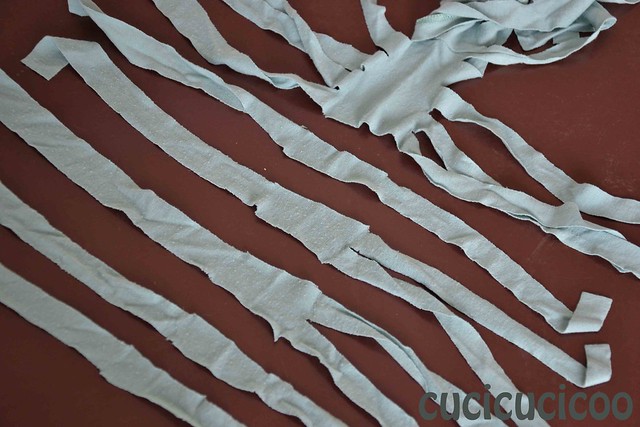 So I cut through it to make lots of separate strips. Having cut the two sides of strips at two different times, they weren’t properly lined up, so some of these new strips are Y-shaped. 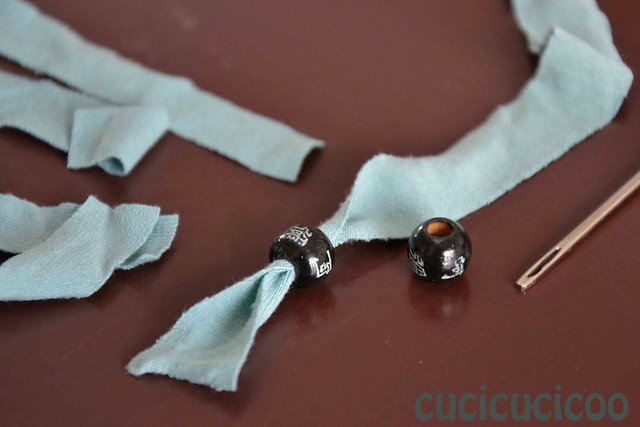 Using a thicker needle, I pulled the strips through the beads, usually using two or three beads per strip. 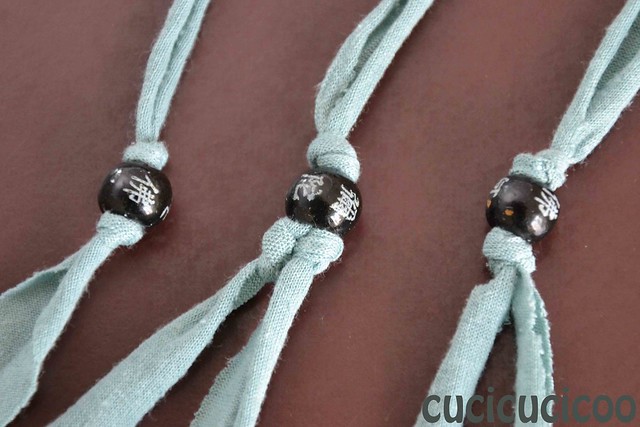 Then I made some knots to keep them in place, trying to vary their positioning along the strips. Here are a few different ways that I knotted the strips. 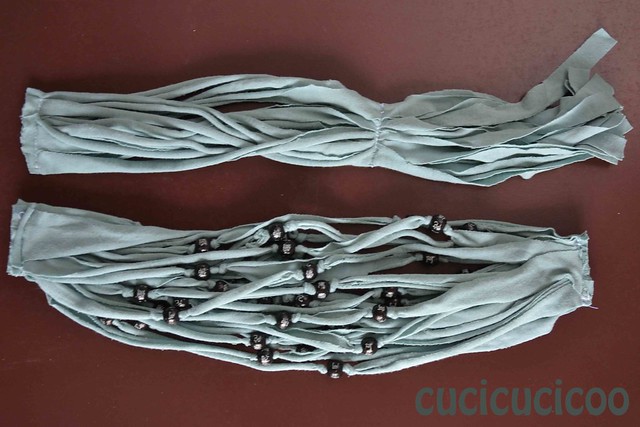 I used the same old trick of gently pulling the strips to lengthen them and make them roll up. I joined the ends all up and sewed them together. I did the same with the remaining strips, but sewing the second set of ends further inwards to make it shorter. This second part is the back of the necklace. (If I’d made the necklace as I’d originally thought, the strips would’ve been long enough to go around my neck, but these ones weren’t because of how I’d initially cut them. That’s why I had to make them longer.) 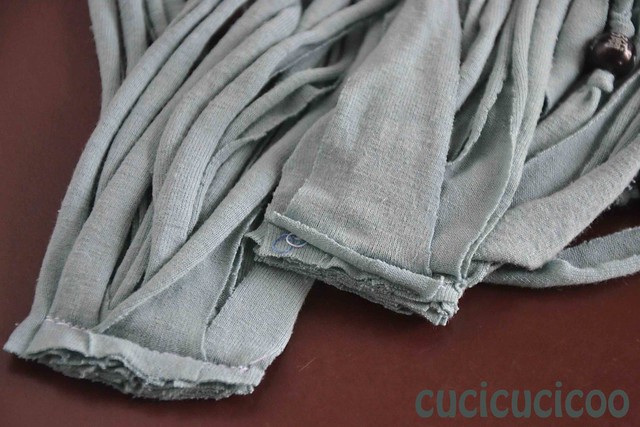 Here are the sewn ends. You need to cut off the excess fabric close to the stitching. 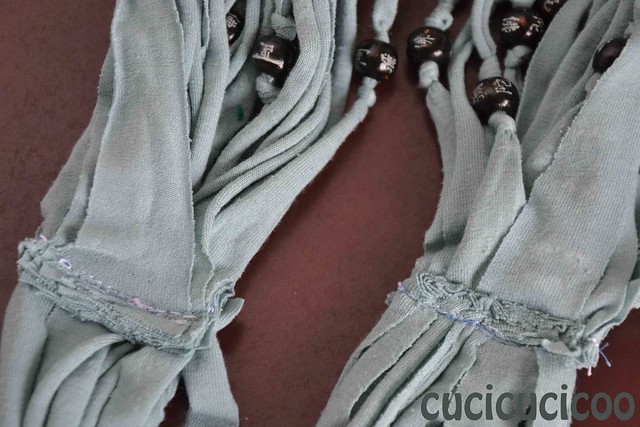 I joined the front and back ends to make a loop and sewed them together. 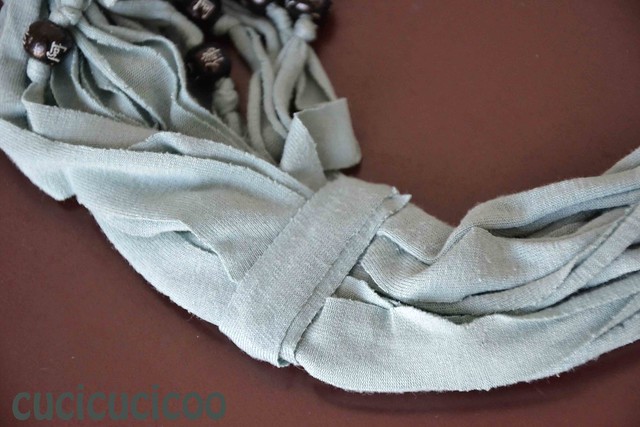 The stitching didn’t look very nice, so I took four scrap strips left over from when I trimmed the back part of the necklace and wrapped two around each seam, hot glueing them down. (The thickness of all those strips wouldn’t made it too complicated to sew.) 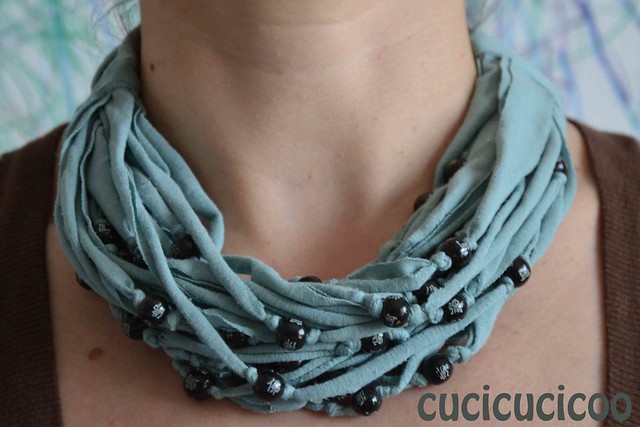 And there’s my lovely Buddhist necklace made from two items destined for the trash can! You can see it in Day 1 and Day 17 of my Me-Made-May’13 challenge. I feel a little blasphemous using these beads like this, but in the end it’s always better than on flip-flops!

15 thoughts on “Mala and T-shirt Necklace”