in campania, the region of italy where we live, a witch called la befana comes the night before epiphany and leaves candy and gifts for kids. these days everyone just buys those prepackaged stockings in the supermarket. within our own family we use the christmas stockings that i made (which you can see here and here. in the united states it’s santa claus who fills up stockings and epiphany isn’t celebrated at all.). but i don’t feel like sewing a new fabric stocking every year for cousins, grandmother and other young friends who we see in these few days. usually i just reuse stockings that others have given my kids and i fill them up with homemade sweets. but when i don’t have any stockings to reuse, i sew them out of paper.

i did this the first time three years ago after seeing the idea on alessia scrap & craft. this year i was super rushed (due to flu pandemic in extended family, my daughter’s swim performance, etc.) and i wasn’t able to make all the sweets i’d wanted. then i was only able to make the stockings the actual morning of epiphany, rushing as much as i could. i always save the paper that our bread comes wrapped in to use it instead of paper towels when we fry foods. so i picked out the three sheets of paper that were in the best condition, i quickly drew the shape of a stocking on each, and then machine sewed the paper.

i plopped the kids at the table with markers and the three stockings and told them to draw on them, while i wrapped up the desserts that i’d managed to bake the day before. this year i decided to make bar cookies so as not to waste time making bunches of cookies and dealing with putting things in and out of the oven all day. so the recipients got lemon bars…

my daughter drew some characters from the movie yellow submarine from memory (i already told you how much she loves that movie!) for her cousin and was so happy with how they came out that she even took pictures of them with her own camera!

and with the befana, the holidays are over and today everyone’s back in school!! happy back to normal life, everyone! 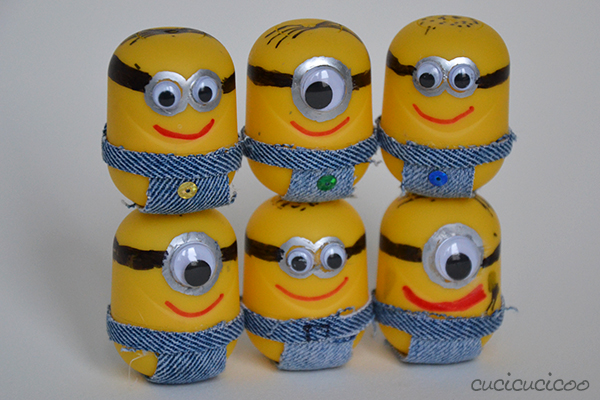 Happy Holidays from Cucicucicoo (and the Minions!!)