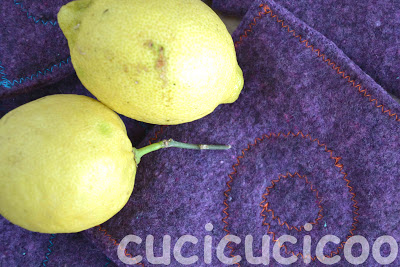 i consider myself a pretty ecological person that uses pretty much everything re-usable instead of disposable as possible. but every so often i find some new idea. that’s how it was when i read about sibia’s recycled sponges.

she made rectangles/squares with two layers of felted wool sweaters (for washing dishes) or of recuperated bath towels (for the bathroom). i couldn’t resist and made some too, but the second type in a totally different way.

let’s start with the felted wool ones. you can use the fabric from wool clothes that have felted up during the wash for loads of things (for example, for cloth diapers and menstrual pads, with which i’m currently experimenting with wool), but i had three of my daughter’s dresses/skirts that i’d accidentally shrunk in the washing machine. the pieces were too small to use for other things i wanted, so i used them for the sponges. my first was this white dress. i took out the zipper for future use and them made four sponges.

i made irregular shapes to better use up the fabric, folding it to make two layers, adding a little hanging loop, and doing a zig-zag stitch both to close up the sides and in the middle to keep it all together better.

i was pretty happy using them. sure, they don’t foam up like the ones you buy, but as sibia advised, i put the dish liquid in a pot that needs washing and then wash everything from there, without putting the soap directly on the sponge. they’re slightly rough, perfect for anti-stick pans and slightly hard crusted-on gunk. when they’re dirty, just throw them in the washing machine with towels and stuff. i also really like them for washing the bathroom sink and tub with a bit of baking soda. so i made some more from these sadly shrunken garments, giving birth to…

…and four purple ones.

i also decided to make the terry version. i’d finally convinced my husband to remove the masses of socks from his sock drawer that he never uses and, amongst god knows how many discarded socks there were around eight pairs of ankle socks in relatively thick cotton (you know, the sporty type). so i decided to use them to make sponge-mittens.

i cut them at the heel so as to use just the flat part and slipped one inside another. in this picture you can see there are four socks, though for others i used just three. however in the end i’d suggest using just two because they take ages to dry and it’s hard to slip them back inside each other after washing. again, i made hanging loops and i sewed the edges all together with the overlock machine (but you can use a regular sewing machine, too).

my idea was to slip your hands in to wash dishes, but in the end they’re not super comfy like that. but i like them for washing the table, counters and bathtub walls. go figure, even my husband said they work really well! but then i decided to open a few to make a more normal sponge…

…and they’re great like this! (even better, actually) i’d just resewn the edges with the overlocker when i took this picture, which is why the edges are all wavy. anyway, all that was left of the purple/fuschia dress were the sleeves because they were wool so didn’t felt, the buttons and a few strips of purple wool. but i didn’t throw them out, oh no! i’ll show you soon what i did with them! (and i also have some other eco-sponges brewing in my head that i still have to make. soon… i hope!)