ok, so i’m not really against ikea, but sometimes i just can’t stand buying something, no matter how inexpensive it may be, if i can make it myself (like my cat neck pillow). it happened one day about a year ago (yes, i am a bit behind with some posts…) with this little stuffed snake that my daughter wanted at ikea. any normal parent would’ve said, “ok, it only costs 50 cents, we can afford it and that way we can avoid an ugly scene in the middle of the store.” but we already know that i’m not the apex of normalcy. so we went back home, she picked out a piece of green bamboo velour (good choice!) left over from some cloth pads, and we got to work. and this is the little guy that resulted. the tongue are some strands of embroidery thread braided and knotted at hte end. we like him a lot and he’s really soft, even if i still wondered it it was worth it when the alternative only cost 50 cents. but in the end i’d say it was because handmade ALWAYS (almost) beats industrial. right? right!

about a month goes by. i cannot take anymore of that thumb that’s taken up residence in my daughter’s mouth. she keeps on having problems with canker sores and socializing. but she feels she needs it when she’s tired, sad or stressed. enter stage right (or left) an agreement between us. i propose: i’ll make you a special super soft stuffed toy exactly as you want it and you can carry it around, even in your smock at school. that way, when you’re tired, you can take it out, rub it and cuddle it however you want instead of sucking your thumb. she responds: ok! i want a snail! (and here it is with a little hat she made it.)

she chose other colors again from bamboo velour (it’s so soft, it’s perfect for stuffed animals!).

while i worked, i put her to work, too, stuffing a pillow (the piece i had to take off from this peanuts duvet cover that i made two years ago).

first i made a fabric rope, placing the irregular edges inside. i wanted it to be puffy, so i didn’t cut the edges, just rolled everything up.

here it is finished, hand-sewn.

i thought i could avoid sewing the shell just by knotting up the tube, but i wasn’t happy with the result.

in the end, i just made a spiral and again hand sewed it.

for the antennae, i folded a scrap of velour in half and sewed some long shapes. i cut them out and turned them the right way out.

at this point it had gotten a bit late (hence the crapola lighting here). now the body. i did it the same way as with the snake. i folded a long piece in half and sewed the shape, making it rounder at the head and tapered at the end. but i also slipped in the antennae towards the inside with just the non-sewn ends sticking out. i left a space halfway down the body to turn it right-side-out and stuff it.

then i bend the body around the shell, hand sewing them together. sofia chose the colors and how to do the face, and i embroidered it.

and here is the result, baptized “lumi” (short for “lumaca,” snail), ready to be slipped into a school smock pocket (and with his own smock that sofia made him). despite her unenthusiastic expression, she was thrilled to have her own snail made exactly the way she wanted. but, you might ask, the goal of putting and end to thumb-sucking? it worked for all of 10 minutes and then the thumb was right back in it’s favorite place!

a bit of irony/hypocrisy: i entitled this post anti-ikea, but just look what’s in the background of the above photo? a duvet cover that i made with ikea fabric! i TOLD you i love ikea!

p.s. two good bits of news from my beloved sheri from awesomesauce & asshattery: 1) her new book of tutorials has come out and is already on its way to me! i can’t wait to read it and i’ll definitely be reviewing it for you. or you just can’t wait, you can order an autographed copy along with a gift she’s made, a donation to designers against aids AND free shipping! geez, what else could you ask for?! and then 2) she’s offering a fantastic handmade creation FREE when you order something from one of her two stores before christmas! 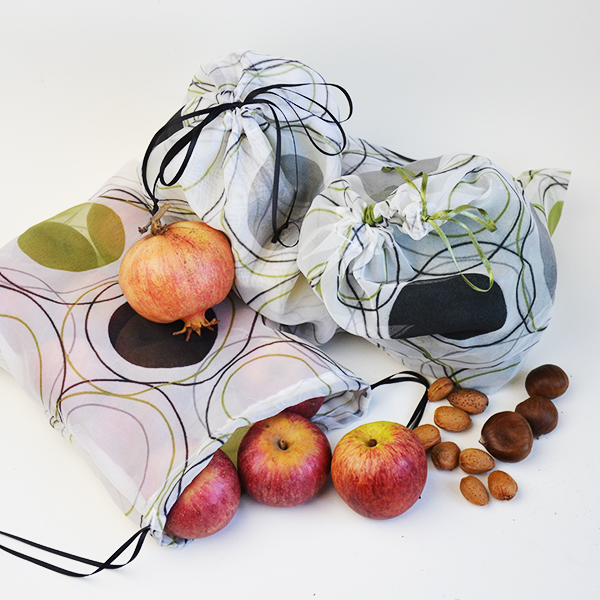 How to sew reusable produce bags