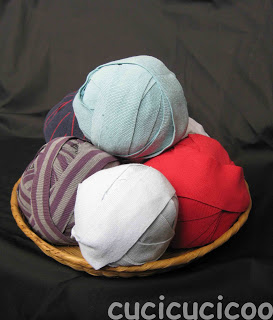 last week i started a new project with this lovely homemade “yarn”. and what did i make it out of? old t-shirts!

there are tons of ways to upcycle t-shirts that you don’t use anymore, but this is a great way to use up all those stained, shrunken, discolored, ridiculously worn out or otherwise hideous ones. making yarn out of them (and then working it up), you don’t really notice all these defects. let’s go on to how to make it. 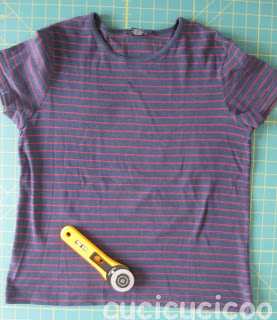 1.  find some t-shirts that you don’t need anymore. you can do this project just with scissors, but it is so ridiculously easy and fast to do it with a rotary cutter and an extra-large self-healing mat. this was the first time i used these tools and it was a revelation for me! (i’m putting in the links to the actual products i used and where i bought them from.) 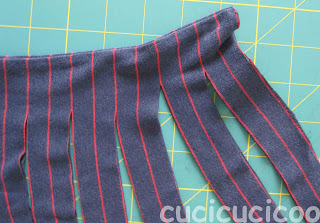 2.  first, cut the  bottom hem off the shirt. then start cutting strips from one side to the other but leaving about 2 or 3 cm at one edge UNCUT. for the project that i did, i cut 2 cm wide strips, but if you have a thin t-shirt, you might want to make wider strips. you don’t have to make them perfect because anything knit or crocheted with this yarn will have lots of little imperfections anyway, but i like this effect (good thing, too, seeing as i always tend to cut corners and not be particularly careful about certain things!). cutting strips from a horizontally-striped shirt is even more easy. 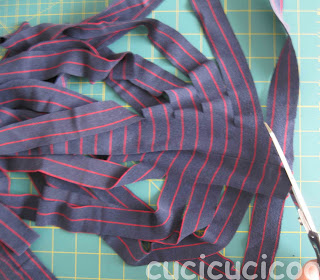 3. keep cutting these strips until you get to the armpits of the shirt, where you will cut all the way through to the edge to cut the strips off from the top of the shirt. then unfold the side seam that you didn’t cut. with your scissors, make a diagonal cut from the far edge to the inside of the first upper strip. look at how the scissors are positioned in the picture (which, i KNOW, is not focused, but i was having issues holding both scissors and camera!). then continue cutting from the right side of each lower strip to the left side of the corresponding upper strip. doing this, you will end up with one long continuous strip. the diagonal cuts will not be perfect, but it really doesn’t matter in the end. another way you could do this without using the rotary cutter would be to just cut a spiral up the body of the shirt with scissors, though it would be harder to make the strip even. 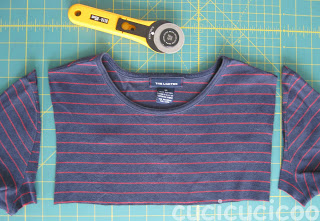 4.  you could just leave it like this, but seeing as each t-shirt doesn’t give you a ton of yarn, i prefer using the top of the shirt, too. so, after flattening out the top part on the cutting mat, cut off the sleeves. 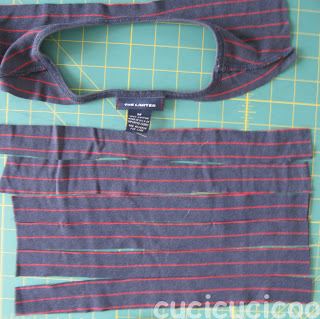 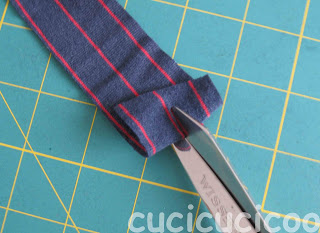 6. now we need to join all these strips. what i did for most of the shirts was join the ends with a serger. it’s hard to sew the ends together with a regular sewing machine because t-shirts are awfully stretchy. another way to do it (but which makes the final knitted result a bit less regular, although it’s not a real big problem because nothing you make with this “yarn” will ever be perfectly regular anyway) is to join the strips with knots. at the end of each strip, fold over a little and make a tiny cut with your scissors. 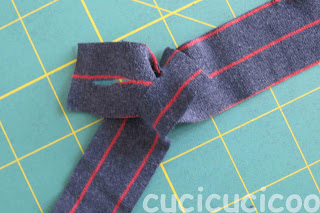 7.  insert the end of one short strip into the cut made in the end of your long continuous strip. please don’t try to first join all the little strips and only after that join those to the long continuous strip (as i did the first time around). you’ll have to pull a long amount of strips through that little hole and it will be a pain in the butt. 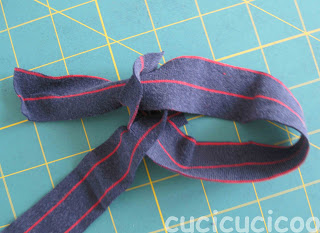 8. insert the other end of the short strip through the hole sticking out, making a loop. 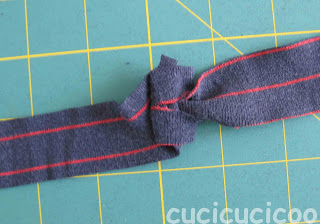 9.  and pull that end to make a knot. don’t pull too hard or you might rip the hole. it doesn’t have to be a tight knot. 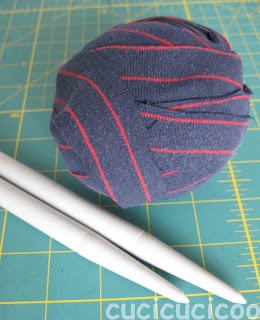 10.  when you’re done joining all the strips, roll a ball out of your new yarn. and go hunting for every old t-shirt in your house to make a bunch more!

in order to knit (or crochet) this yarn, you’ll need big needles (or a big hook). i used 13 mm needles and that worked quite well for 2 cm wide strips. i’m still working on my project with this stuff, so it’s still going to be a secret. but i hope to be able to show you in a few days! don’t forget to come back to see what it is! (edit: here is one project and here’s another!)

21 thoughts on “How to make yarn from old t-shirts”