**TUTORIAL UPDATE**
I’ve created a new version of the woven cereal box basket, giving more detailed instructions and including more pictures to better explain each step.
You can find the new tutorial here!
——————————————— 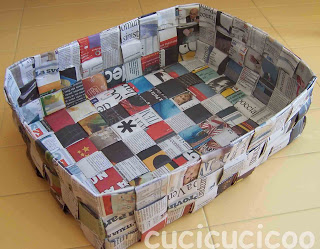 a year ago i saw this post on pane, amore e creatività on how to make a basket out of woven folded newspaper pages. i really liked the idea so i gave it a go. it came out relatively nice although, despite the gazillions of staples i used to keep it together, i couldn’t manage to weave the sides tightly and it came out a bit funny. i put it in my daughter’s room anyway to keep some of her toys in (any parent knows that you can never have enough containers for toys!). at first it worked ok (as you can see in the second photo), but after a few months, the sides started warping, getting less and less rigid, and now this basket is pretty useless. 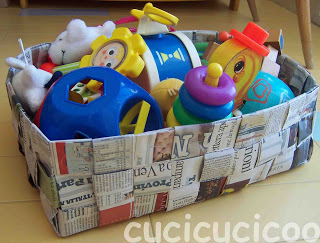 nearly a year later, i saw a similar project in the book craftcycle (which i wrote about in my last post), but made with cereal boxes. what a great idea! this paper is more rigid and full of colors! and of course we always have tons of them hanging around. however, as is often the case, i had to make a few changes to the instructions. so i decided to rewrite the tutorial here, complete with pictures taken on a floor in dire need of a cleaning! 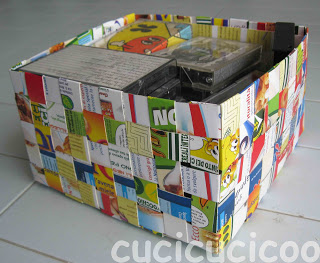 1. to make a box like this one (about 18 x 18 cm, 10 cm high) which i ended up using for some old audio cassettes, you’ll need 3 cereal boxes. if you have a paper cutter, it will be a lot easier and faster.

2. first, cut open the boxes along the side and cut off the very top and bottom flaps.

3. the book said to cut the strips 3 mm (1/8”) wide, which to me seems absolutely insane (not to mention that the strips in the book’s photos are definitely wider), so i decided to cut them 2 cm wide. do this with all three boxes. 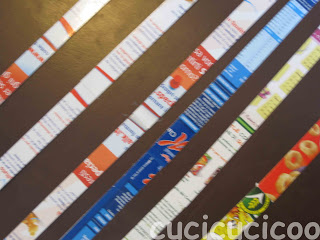 4. attach the ends of two strips to make one long strip. the book suggested using a glue gun, but for me that was a total disaster (which you can see if you look at the inside bottom of my finished basket). then i tried with other regular glue, but it was still not working out. then i thought of double-sided tape, which ended up being perfect for this project. it sticks on right away, you don’t have to hold the strips together until they dry and it doesn’t create bulk between the strips. do this to make 18 long strips made of 2 strips each and another 6 long strips made of 3 strips each. (sorry about the crummy picture, but there wasn’t any natural light left by the time i took it.) 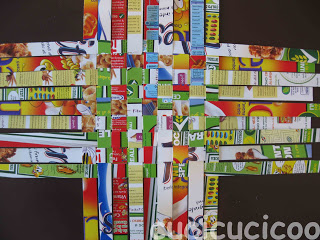 5. start laying out 9 of the strips made of 2 strips, alternating the colors so it looks more mixed. then start weaving with the other 9 strips of 2 strips. at first put some double-sided tape between the strips to keep them in place. and try to hide the overlapped parts inside the basket so you won’t be able to see them. 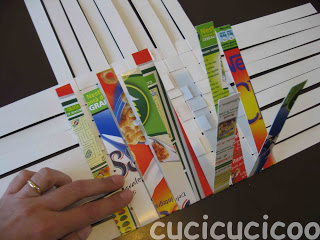 6. when you’re done weaving the base, turn it upside down and fold the strips up on all 4 sides. then start weaving the sides of the basket with the strips made of 3 shorter strips. at the corners make sure you fold the strips and use the double-sided tape to keep everything from shifting around.

7. use 5 of the really long strips for the sides, then trim the strips sticking out the top to just 2 cm. (sorry, i didn’t take pictures of this part because it was dark out and i was tired!) fold them towards the inside of the basket and stick them down with double-stick tape. then use the last long strip to go around the inside of the basket, sticking it down with the tape, so that it covers the ends of the other strips. (as you can see in the picture below) 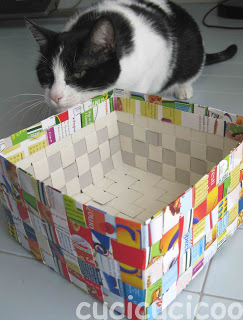 8. finally, protect the paper (and make it a bit more rigid) by coating it lightly with a bit of diluted craft glue with a paintbrush. the book suggests using modge podge, but i don’t even know if that exists in italy. regular glue diluted just a bit worked just fine for me.

and there you have it! my basket isn’t exactly perfect, mostly because of the problems i had with the glue gun, but using the double-sided tape it comes out much better. you can obviously make bigger or smaller baskets by making longer or shorter strips (joining more or fewer shorter strips). or you could make a little box with a cover. have fun!

19 thoughts on “How to make baskets from recycled paper”