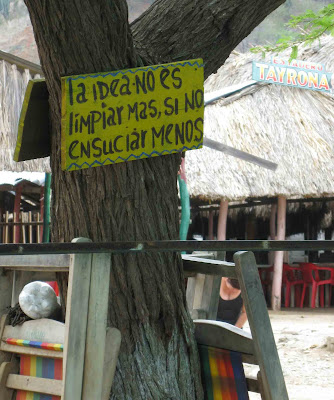 apparently, i’m not the only ecological preacher out there! the beach we went to in colombia this past summer was full of trees with inspirational messages on them. i got such a kick out of them! here it says “la idea no es limpiar mas, si no ensuciar menos,” or rather “the idea isn’t to clean more, but to dirty less.” 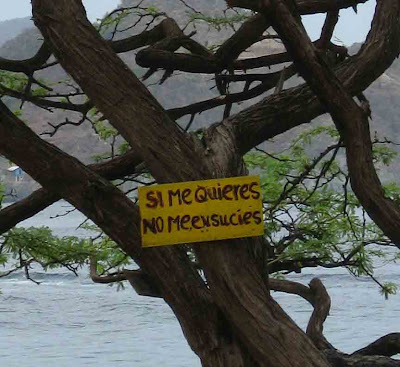 this tree is saying “si me quieres no me ensucies,” so “if you care about me, don’t dirty me.” cool, huh?!

so, here i’m writing about two idea to “dirty less.” first, compost. some italian towns collect “wet” trash separately, meaning organic trash, meat and grease remains, paper napkins, etc. unfortunately they don’t compost this stuff (at least not in my town), even though they couldn’t really with the animal byproducts in it, but they dispose of it in some way that isn’t dumping it in a landfill or bringing it to our despised local incinerator. i need to find out more about it, i honestly don’t know exactly what they do with it. anyway, even doing this, it’s still trash that needs to be gotten rid of. so i decided to start composting.

if you have a yard, it’s super easy to pop a compost pile or bin in the corner and dump all your fruit and veggie remains, egg shells and paper napkins in it. after a while, the heat helps decompose it and after quite a few months (or years) you’ll have marvelous soil, full of nutrients, that you can put back in your garden or use for potting plants. some italian towns even give out free composters to those who have a yard to use it in.

those who live in an apartment will have a bit more difficulty using a compost bin, and that’s why i didn’t use one myself. but then a friend of mine managed to do balcony compost, so i gave it a go as well. so, procure a bucket and a plastic bag that fits in it nicely and is wide enough to fold over the rim of the bucket (so it won’t slide down or move). use something pointy (i used an ice pick) to make a bunch of holes in the bag, then put it in the bucket. first put dry twigs at the bottom. the twigs and holes let air to circulate a bit, otherwise you’ll end up with some yucky, stinky mush. then you can start dumping your stuff in it. it’s important to remember NOT to put any animal products in your compost (except egg shells)! put the bucket on your balcony, preferably in the shade and where the rain won’t get it. leave it uncovered when possible, but if it might rain, cover it. the contents should stay dampish, but not too much. it’s better if you mix it every so often and you’ll see how it starts decomposing. don’t worry, it won’t stink if you don’t let it get wet. if possible, mix in a couple of tablespoons of fireplace ashes every couple of months. it’s amazing to see how so much trash can become so little soil and how much less trash you’ll have. in about 6 months you’ll already start to be able to use some of your awesome new soil for you balcony plants!

i grew up in a town on the atlantic ocean and it’s common to take frequent walks to the beach. in our area the beaches are full of dry seaweed. my mother brings home masses of this seaweed and spreads in among her garden plants as mulch/fertilizer. it works really well, is cool-looking, is super ecological, gives the soil lots of nutrients, and is free! go mom!

so, there are another couple of ideas of how to dirty less, enriching your soil, all for free!